What copper tells us about the world’s vital signs The copper price is seen as a proxy for global manufacturing and could contribute to Chinese economic growth slipping to 5% or lower in the first quarter. Image: Krisztian Bocsi, Bloomberg

You may have missed it, but history was made this month when the copper price dropped 13 days in a row. The last time that happened was in the early 1970s.

China is the largest consumer of copper and the outbreak of the Coronavirus last month interrupted what was a fairly respectable recovery from the lows of September 2019. There is considerable confusion over the severity of the virus and whether it has peaked and is on its way out, or whether Chinese authorities are muzzling a truly frightening outbreak.

The copper price tells its own story. Chinese economic growth will likely slip to 5% or lower in the first quarter of 2020. International Man resource expert Marin Katusa is long-term bullish on copper, but believes prices will drop lower before they rebound. Copper prices in US dollars are down 12% in the last few weeks to $2.55 a pound, and there may be further downward pressure coming from two of the largest producing countries, Chile and Indonesia.

Labour strikes in Chile resulted in production shutdowns in 2019, and that unrest is by no means over. Anglo American reported a 5% drop in its fourth quarter production in 2019 relative to the same quarter in 2018, although this was due to a range of factors, including a change towards a tolling arrangement with outside suppliers.

Read: What to watch for in commodities in 2020

Another major copper producer is Freeport-McMoRan Inc, which owns Indonesia’s Grasberg, the world’s largest gold mine and second largest copper mine. Freeport has been embroiled in disputes with the Indonesian government, which forced the mining group to relinquish majority control in 2018 in return for retaining the right to mine until 2041. Last week Barrick Gold CEO Mark Bristow told the Mining Indaba in Cape Town that he is interested in buying Grasberg as it is a high-quality, long-life asset.

All this uncertainty sent the price of copper shooting up by 11% at the start of this year, until the Coronavirus sent it crashing down again.

It may go lower still, but US-based RJO Futures’ outlook report reckons copper is one to watch in 2020 as it is most likely to experience a sustained bull market, in part because of a long-overdue weakening in the US dollar. The International Copper Study Group forecasts world copper mine product to grow 2% this year after a 0.5% decline in 2019. Analysts are expecting a robust 4% growth in refined copper production in 2020, after a series of smelter disruptions and shutdowns in 2019, mostly for maintenance and technical upgrades.

What might change this outlook is a quick containment of the Coronavirus and a bounce-back in Chinese manufacturing later in the year.

This is what has the copper bulls excited.

The following chart shows the steady decline of manufacturing as a percentage of GDP among the world’s leading economies. What it really illustrates is the crowding out of manufacturing by the financial sector. 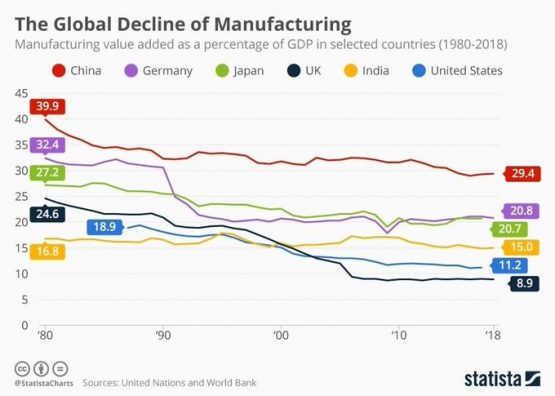 Thank you for a very insightful article. I visit Moneyweb for articles of this calibre.

More copper will be needed for electric motors in electric cars.