Is assessing regulatory regimes in all 50 states to allow for its rollout in the course of the year.
By Adelaide Changole and Loni Prinsloo, Bloomberg  4 Feb 2022  08:33 Africa’s largest cryptocurrency exchange is looking for a foothold in the US, the latest international platform to try and tap one of the world’s biggest populations of digital-asset investors.

Owned by conglomerate Digital Currency Group Inc, Luno is assessing regulatory regimes in all 50 states to allow for its rollout in the course of the year, Marius Reitz, its general manager for Africa, said in an interview.

“It is more complex than launching in an individual market because of the different states and different regulations within each of these states, so there’s lots of moving parts,” Reitz said. “But it is a company focus for us for 2022.”

A number of fast-growing cryptocurrency exchange brands — such as FTX and Binance — have been moving into the US market. The world’s biggest economy is home to more than half of the world’s crypto unicorns, according to CB Insights. A unicorn is a private startup that’s achieved a valuation of at least $1 billion.

Founded in 2013, Luno has 9 million users from Asia to Africa. It currently offers trading in tokens including Bitcoin, Ethereum and Ripple — and could soon add new coins chosen from the world’s 10 most liquid cryptocurrencies, Reitz said.

“A lot of the operation time goes into security and custody” when choosing a coin, he said. 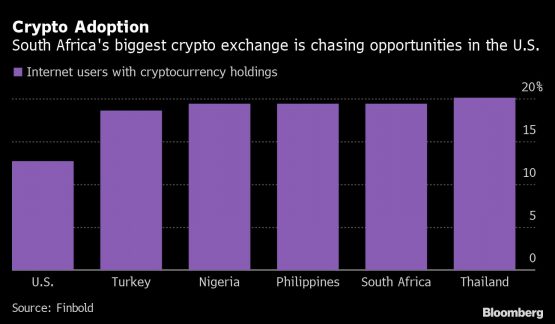 Digital Currency Group was the earliest investor in Luno and acquired it entirely in 2020, going on a year later to achieve a $10 billion valuation when it raised $700 million in a transaction led by SoftBank Group Corp.

The spread of cryptocurrencies in Africa has so far centered on Nigeria and South Africa, where nearly a fifth of the population own some form of digital assets. That compares with the global average of just over 10%, according to the latest data from Finbold. Luno has also identified opportunities in East Africa, where it already has operations in Uganda, Reitz said.

About 16% of Americans have invested in, traded or used cryptocurrency, a recent Pew Research Center survey showed.

In South Africa, Luno is awaiting new regulations that Reitz says are “imminent” and will likely boost consumer protections. The changes should allow platforms including Luno to pull in institutional investors currently sitting out of the market.

The rules could also make possible the listing of more sophisticated products. Reitz said that, in a year or two, he anticipates offerings such as cryptocurrency exchange-traded funds, which allow investors to hold a basket of coins without having to purchase them.

South Africa’s stock exchange operator JSE has rebuffed efforts to list crypto ETFs before, citing a lack of a regulatory framework in the country.

“We have got all these asset managers sitting on the sidelines wanting to launch their own crypto products, but they’re not able to do so,” Reitz said. “As soon as we see regulation, you’ll see a flurry of crypto products being offered to investors in South Africa.”