There’s elation and there’s euphoria, and then there’s the unrestrained rapture that descends upon Bitcoin’s emboldened bulls whenever the cryptocurrency soars to a fresh record.
Bitcoin was holding at about $64,650 as of 11:30 a.m. in Hong Kong trading Thursday after rocketing to a fresh record overnight. The largest digital currency touched a high of almost $67,000 Wednesday, galvanized by the successful launch of the first U.S. Bitcoin futures exchange-traded fund — the second-busiest ETF debut on record and another step in its evolution from the frontiers of finance toward something with more mainstream appeal. The cryptocurrency has rallied some 120% in 2021 — and for some believers, $100,000 is once again in sight. 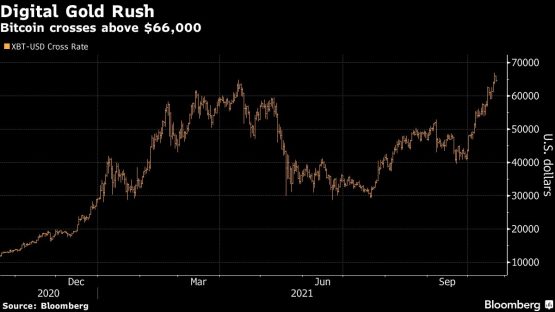 As notorious as Bitcoin has been for its wild price swings, the cryptocurrency’s ability time and again to not only recover but reach new all-time highs — or “ATH,” as Bitcoin brethren say — has confounded sceptics and given bulls more to cheer.

Uptober leads to Moonvember leads to Bullcember, I don't make the rules, just saying how it is. #bitcoin

Bitcoin entered 2020 having been the prior decade’s top-performing asset; it gained more than 300% last year and was on a roll at the start of this year, too, before sliding over the summer, when regulatory concerns from the U.S. to China sent the crypto plunging below $30,000. Bitcoin then staged a resurgence as investors moved past the various bans and crackdowns out of China and grew more optimistic that any looming U.S. regulatory regime wouldn’t stifle the market. Its use as an inflation hedge by some investors has also played into the rally as consumer prices worldwide have climbed.

“There are a lot of things in this world that have worked out awfully well,” Blankfein said in a Bloomberg “Front Row” interview, adding that he’s open to crypto. “To just come out and say that a market that’s already in excess of $2 trillion, that faces all these regulatory headwinds, that a lot of people really don’t like and would enjoy seeing crushed, somehow is — every day, it doesn’t look like it’s flourishing, but on no day has it recently looked like it’s dying.”

Based on average return rates over the last three years for a variety of assets including so-called Faang stocks such as Facebook Inc. and Apple Inc. as well as the price of gold, researchers at platform Forex Suggest posit that Bitcoin could reach a $5 trillion market value by the start of 2024. That’s based on its 103.5% average annual growth rate, they said in a report.

Where Bitcoin goes next depends on how much support it can find above $65,000, said Leah Wald, chief executive at Valkyrie Investments, which is among the firms besides ProShares that have filed with the SEC to issue Bitcoin futures ETFs. In the past, the coin has tended to sell off following new highs as traders booked profits. If it can hold above that level, then all signs point to another leg higher.

“Should the bullish momentum continue, it isn’t out of the realm of possibility to hit $80,000,” she said. “I think $100,000 this year is a bit optimistic, but anything is possible and it wouldn’t surprise me if we somehow pushed that far north.”

Some strategists, who look to decode Bitcoin’s potential moves based on technical analysis of charts, have already been projecting $100,000-plus targets. Fundstrat Global Advisors’s Tom Lee says BITO could attract $50 billion in flows in the fund’s first year. Bitcoin itself could hit $168,000, he predicts.

Among the boldest — or at least most public-facing — moves is one by Michael Saylor, the famous Bitcoin believer whose investing acumen is rivaled only by his media savvy. The CEO of MicroStrategy Inc. promised to convene a party for Bitcoin bulls if its price ever gets to $100,000.

The halls of eternity echo with the cries of those who sold their #bitcoin.

Still, if history is any guide, some caution is in order; Bitcoin could pull back in the coming days.

The coin has sold off following past seminal moments, including the listing of BTC futures on the CME in December 2017 and the listing of Coinbase Global Inc. on Nasdaq in April this year, says Noelle Acheson, head of market insights at Genesis Global Trading Inc. This time around, any potential disappointment over the futures-based ETF after the initial surge could provoke a correction.

“However, even if there is some selloff, it is unlikely to be as deep or lasting as the previous examples because of where we are in the market cycle,” Acheson said. “In both previous cases, the market was already frothy and showing signs of exhaustion — that is not the case this time around.”

I don’t get it. I didn’t get tulips and exotic game either. But I just live here

Tulips were a bit before your time, otherwise you are late in the game. But you get the sound money idea : dollars , pesos , Zim dollars etc etc? Then you are as safe as a Steinhoff shareholder afore the crash or a holder of the junk bonds before the ?2009 melt down. Legacy financial systems and MMT wont fail , wont fail, wont fail….