Others, however, remain confident about the longer term outlook.
By Eric Lam, Bloomberg 9 Jun 2021  09:29 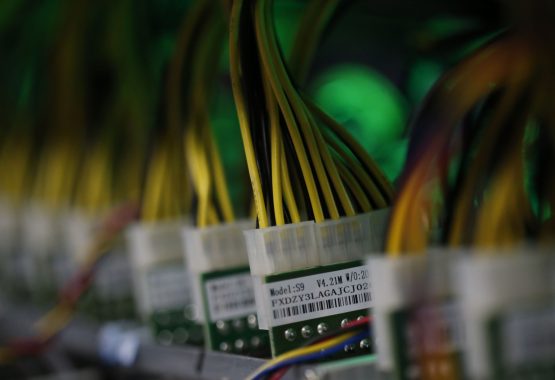 Another bad week for Bitcoin could be a precursor of more pain to come, according to strategists watching the selloff in cryptocurrencies.

Further weakness in its price may bring the $20 000 zone into view as a downside target, according to Oanda Corp., Evercore ISI and Tallbacken Capital Advisors LLC. Bitcoin has dropped about 7% this week and was trading at about $34 300 as of 8:12 a.m. in London.

The largest cryptocurrency is “dangerously approaching the $30,000 level” amid growing regulatory fears in the US, and “a break of $30 000 could see a tremendous amount of momentum selling,” said Edward Moya, senior market analyst with Oanda Corp.

Bitcoin has dropped about $30 000 from its April record, roiled by a rebuke from billionaire Elon Musk over the energy it requires as well as a renewed regulatory crackdown in China. The ability of US authorities to recover a high-profile Bitcoin ransom also dented the idea that it’s beyond government control, which has been an article of faith for some of the coin’s supporters. 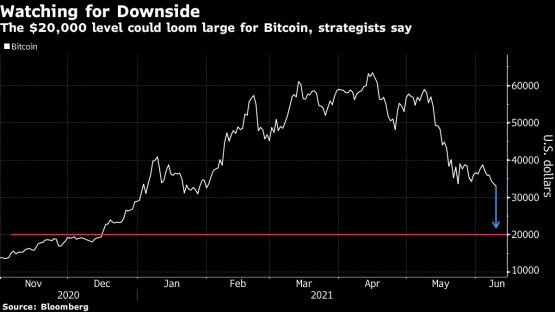 Evercore technical strategist Rich Ross and Tallbacken Capital Advisors’ Michael Purves have both flagged the $20 000 area as a potential key level if Bitcoin breaks much lower than where it is now.

Others, however, remain confident about the longer term outlook.

For instance, Michael Saylor’s MicroStrategy Inc. boosted a junk-bond sale to $500 million from $400 million to fund the purchase of more Bitcoin. MicroStrategy has emerged as one of the most bullish public companies on cryptocurrencies. In El Salvador, President Nayib Bukele said the nation has adopted Bitcoin as legal tender.

“How much lower can it go?” Purves asked in his note Tuesday. “The most obvious answer continues to be a complete retracement of the breakout from $20 000 — in other words, back to $20 000.”

Meanwhile, a debate is intensifying on how heavily to police cryptocurrencies. Hester Peirce, a commissioner with the Securities and Exchange Commission, said she’s worried about a push toward a more active role by regulators in the crypto market, according to a Financial Times interview.

Guess good old SARS might stay quiet for a while??

Many will write their Crypto losses off against other capital gains. So SARS might be the biggest looser of the lot.

Nothing is sacred. There can never be a completely safe, untouchable currency – especially with the skills, money and resources available to people like the US government. They will always find a work around. They just need time.

Please drop some more so that i can buy some more.

The talking heads on CNBC and Bloomberg have been going full on anti-crypto. As with all previous exercises of manipulation of the simple minds of the fearful and greedy commercial punters, this stunt will also lead directly to transfer of even more of their remaining wealth to the now almighty few that exercise their money power over us all. All kneel and bow your head onto the floor as you hail their ballooning power fed by their increasingly corrupted capitalism.

Seems like news is slow to come through here on moneyweb…

1. Bitcoin price almost at $40k again.
2. El Salvador declared Bitcoin as legal tender alongside the USD.
3. El Salvador plan to mine Bitcoin using 100% renewable geothermal energy from obtained from their volcano.
4. Politicians from Paraguay, Brazil, Uruguay and Argentina are all considering the introduction of bills similar to El Salvador.

Yes Moneyweb very slow….must be the Masters Voice being obeyed. However battle lines are drawn. I expect the full might of IMF/ FED being unleashed as Sensei predicted.(eg the Fed seizing “private wallets”) Nice try but the only ones that believe it are the nocoiners.)We will see.

5. Taproot upgrade to the Bitcoin protocol will be locked in sometime this week. None of the customer data was sold and Alibaba’s users didn’t incur financial losses from the episode. 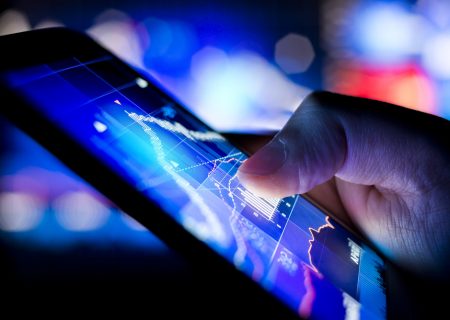