Bitcoin fell to a two-week low amid an intensifying cryptocurrency crackdown in China.

China has ordered payment platform Alipay and domestic banks to not to provide services linked to trading of virtual currencies. The institutions were also ordered to cut off payment channels for crypto exchanges and over-the-counter platforms, the People’s Bank of China said in a statement.

“The PBOC crackdown is going further than initially expected,” said Jonathan Cheesman, head of over-the-counter and institutional sales at crypto derivatives exchange FTX. “Mining was phase one and speculation is phase two.” 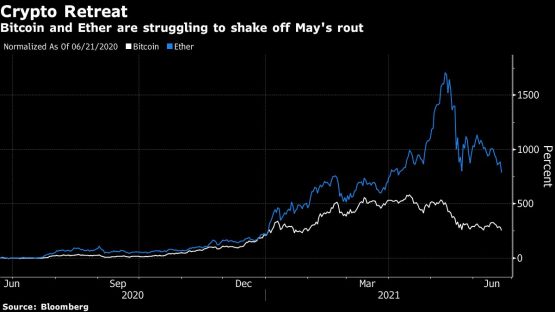 Separately, a Chinese city with abundant hydropower has stepped up action to rein in mining. A Ya’an government official told at least one Bitcoin miner that the city has promised to root out all Bitcoin and Ether mining operations with a year, said a person with knowledge of the situation.

In the backdrop, the appetite for risk assets has diminished after last week’s hawkish policy pivot by the Federal Reserve. Even though equity markets tipped into the green on Monday, analysts pointed to lingering jitters about frothy corners of the market.

Some commentators have said China’s hashrate — the computational power used to mine coins and process blockchain transactions — is waning amid harsher regulatory oversight.

The crypto faithful are also grappling with a tumble in tokens used in so-called decentralised-finance — or DeFi — applications. DeFi apps let people lend, borrow, trade and take out insurance directly from each other using blockchain technology, without use of intermediaries such as banks.

For instance, the DeFi Titanium token went from being valued at around $60 to $0 — a rare occurrence even for famously volatile crypto markets. Famed mogul Mark Cuban had invested, telling Bloomberg News earlier that though it represented a small percentage of his crypto portfolio, the wipe-out “was enough that I wasn’t happy about it.”

The beginning of the end for Crypto.

China deals with it very directly, the US they get others to do it for them.

It is like when Mommy blames Daddy and Daddy blames Mommy …

What is the benefit for Reserve Banks across the world to have a monopoly on the issuance of currency, that is supported by the legal framework, the judiciary, the police, and the military, if they do not plan to enforce it? If the USA is willing to launch a War on Terror to enforce the petrodollar system, what will stop them from removing any competition for the dollar? Cryptocurrencies are a game, u until governments decide it is game over.