People hold bitcoin for many reasons: it’s a great speculative play, it’s volatile, and it’s a bet on an entirely different future for money.

More recently, commentators have pointed out the increasingly tight correlation with gold, which suggests investors now see it as a safe haven asset in a time of financial turmoil – which is what it was originally designed to be.

CoinDesk recently posted this graph showing a 60-day correlation, which appears more convincing since the onset of the Covid pandemic in March. 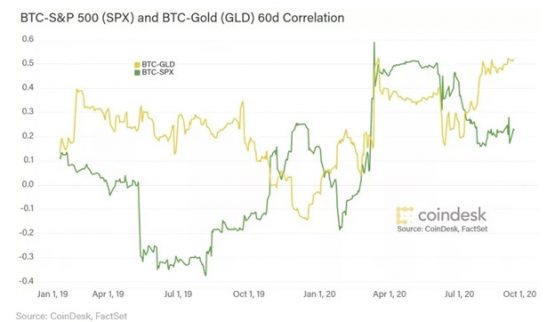 Back in January, Cointelegraph (correctly) pointed out that the correlation was not that convincing. But that was a whole nine months ago. Things have changed since then.

It has also been pointed out that there is a correlation between bitcoin and Tesla’s share price. Before that, it was bitcoin and the S&P 500.

The recent correlation with gold coincides with declining confidence in major currencies during the 2020 financial crisis.

What this also suggests is that bitcoin is cleaving away from its previous correlation with US stocks, and forging a new path more closely aligned with safe haven assets such as gold.

In August, Nasdaq-listed MicroStrategy announced that it had purchased $250 million bitcoin, which now forms the major component in its treasury reserve holdings.

“Our investment in bitcoin is part of our new capital allocation strategy, which seeks to maximise long-term value for our shareholders,” said Michael J Saylor, MicroStrategy’s CEO.

“This investment reflects our belief that bitcoin, as the world’s most widely-adopted cryptocurrency, is a dependable store of value and an attractive investment asset with more long-term appreciation potential than holding cash. Since its inception over a decade ago, bitcoin has emerged as a significant addition to the global financial system, with characteristics that are useful to both individuals and institutions.

“MicroStrategy has recognised bitcoin as a legitimate investment asset that can be superior to cash and accordingly has made bitcoin the principal holding in its treasury reserve strategy.”

Covid has pushed MicroStrategy and others like it into bitcoin. The economic and health crises triggered by Covid, and the unleashing of central bank printing presses as a response to these crises has spread panic across the world.

The similarities, however, should not be overstated. Bitcoin will never mint more than 21 million coins. Gold – while of limited physical supply – suffers no such constraint.

Bitcoin shows an increasing correlation to bitcoin. Some day soon exchanges will be toxic. Then the 18 odd million btc mined will circulate in isolation, nobody bothering to “cash in” into USD , ZAR(god forbid) or whatever.Fiat will try by this method or that to obtain btc but it will be too late ….

how do you place a value on BTC if it only circulates in a closed environment?

Ask a 22 year old what a Kruger Rand is they look at you with confusion. Ask them what a Bitcoin is and they laugh at you and mock you for living under a rock. You need to LISTEN and see where the interest is flowing. What are the kids buying? Maybe then you wont missout on buying Snapchat at $9 and now hitting $40+. No one cares what we think, the market is bigger than us.

…one thing I cannot understand as to why the younger generation (that embraces crypto) is totally AGAINST protecting the natural environment?

I thought that (with Greta Thunberg as a single example) that Gen-Z or Gen-Y is FOR protecting the environment.

Crypto (actually blockchain) is one of the largest environmental disasters in the making, which will be fully evident when the (yet unborn) generation arise, by slamming the current Generation-Z and Gen-Alpha by “what have you done?…how dare you…”.

If you heed the opinion of millenials and children about finances you are a fool. Read One Coin history.

You’re looking at 9-months of data! no real insight on the underlying workings of Bitcoin. This party will last for a while until the next big round of profit-taking happens and Bitcoin falls of another Bitcliff. It was never designed to be digital gold and will not be that; you’re reading way too much this short term correlation…. if you didn’t buy Bitcoin last year, sit back and wait for the next post-bubble bloodbath.

I am watching US markets that have entered corrective Supercycle 4 with an expected duration of at least 9 years. Gold is approaching the turn into the 5th Primary wave of the 5th Cycle since it was set free by its hegemonic US masters. The end of the first “free” Supercylce for gold could well see attempts to return it to a new form of lockdown. Bitcoin also needs its many and varied facilitators to enable “free” access but it has no physical token for any “free” exchange, which makes it a high risk asset that only has a theoretical existence and cannot be secured into the hands of its owners except via the ‘tokens’ of ‘real’ assets. Holders of crypto “assets” thereby need a greater capacity for trust because they are involving themselves with far more requirements for it.

One HUGE flaw with bitcoin that doesn’t get enough attention. Currently the whole system relies on miners doing all the record keeping for a small return of mined bitcoin. What happens when the 21 Mil bitcoin limit is reached and the miners no longer have that incentive? 18,5 million bitcoin is currently in circulation which only leave 2.5Mil left to mine.
They will need to issue more bitcoin, diluting everyone’s holding or the system collapses.