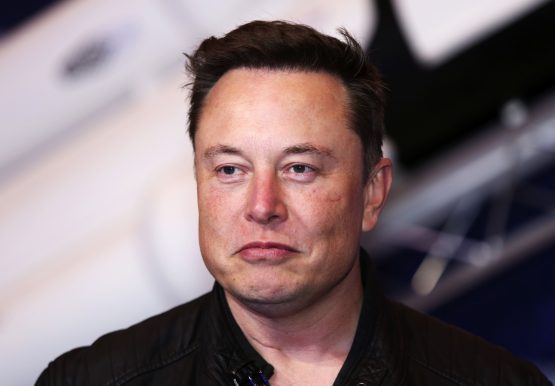 Bitcoin slid after a cryptic tweet from Elon Musk apparently hinting at a potential split with the largest cryptocurrency, the latest post from the billionaire to buffet the token’s price.

The coin dropped as much as 5.4% and was trading at about $36 980 as of 7:05 a.m. in London. The decline dented this week’s stabilisation in the crypto sector after a rout in May. The Bloomberg Galaxy Crypto Index retreated as much as 5.7%.

Musk has roiled Bitcoin and other digital tokens with a string of social media posts. Most notably, the tycoon last month reversed a decision to allow purchases of Tesla Inc. electric vehicles with Bitcoin, citing the environmental fallout of the energy required by the servers underpinning the cryptocurrency. That, plus harsh Chinese regulatory rhetoric, led to a plunge in the sector.

In his latest tweet, Musk wrote “#Bitcoin” with a broken heart emoji and a reference to a lyric from the popular song “In the End” by Linkin Park.

His Twitter account has affected other parts of the market — Samsung Publishing Co., a shareholder in the producer of the “Baby Shark” viral YouTube song, surged this week after Musk tweeted about the jingle.

Bitcoin is about $28 000 shy of its mid-April record of almost $65 000. The biggest believers in crypto argue the token is consolidating before a run higher to new highs.

But Musk’s spotlight on environmental risks — and the way his tweets drive swings in prices — have hurt the narrative that the virtual currency is bound to win more mainstream adoption over time. 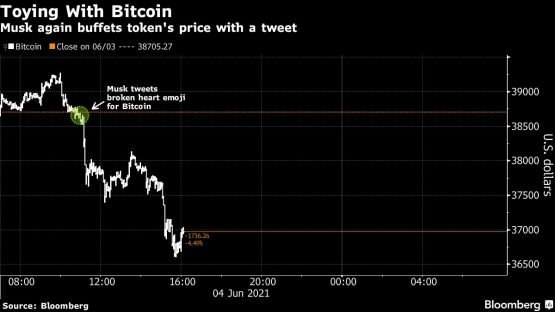 After suspending Bitcoin payments to Tesla, Musk later said that the company hadn’t sold any of its holdings of the digital token — clarifying another of his tweets that raised questions about whether Tesla might have done so.

The repeated posts have fueled speculation over just why the electric-car pioneer is issuing crypto missives.

Tesla in February disclosed a $1.5 billion Bitcoin investment. In April, the firm’s earnings report showed it had sold 10% of its Bitcoin holdings.

Despite May’s rout, Bitcoin is up about 280% over the past year, while second-ranked Ether is up 1 000%. The Bloomberg crypto gauge has climbed about sixfold.

Sure he will put his Bitcoin into Dogecoin. It is easier for him to manipulate that token and he gets larger swings.

He will make more money like that than any of his other endeavors. It is also not illegal to manipulate crypto tokens.

Does anyone take this Asperger’s puppet seriously anymore ?

What has this to do with Aspergers?

I enjoy his tweets, I am not sure why you feel the need to launch a personal attack on him, he obviously has the gift of causing insecurity/confidence in the markets… I find it quite entertaining

All just noise. I think BTC will continue its predicted path until it reach the bottom. Little bit ups and downs to this bottom. Once this is reached it will start the climb to +$100k (also again all predicted).

And all the way down is gonna, be a buying opportunity they gonna tell u ……… Lol.

Just before the 2017 crash had the misfortune of attending a braai eve with 2 crack head crazy parents going on about how they have put there life saving ( to be used for little skys and apples tertiary studie payments in the future) into ripple right at the top… (my spiniker mussel clenthed involuntary tight when my brain processed this woke move of there’s lol….but alas as I was a good braai attende didn’t say anything other than.. Yea that sounds quite a smart move.)

Fast forward to 2021 – 4 years later think ripple still has to go up another 30 % at least for them just to recover thier capital back……. So it looks like little sky is gonna have to with being a plumber when he grows up…. And as for little apples future – onlyfans.