Bitcoin’s 16% pull-back this week after setting new all-time highs is likely a precursor to another parabolic run-up in price, according to research by DecenTrader.

“As we attempt to break out of the previous all-time high from May this year, it is setting up the prospect of a potential parabolic run-up as we saw in the late stages of the previous bull runs,” says DecenTrader.

Bitcoin recently had its first major technical upgrade in years as Bitcoin Taproot was rolled out. Taproot is a series of technical upgrades allowing for greater privacy, cheaper transaction costs, improved smart contract functionality and the ability to scale using the Lightning Network.

These upgrades allow certain information on the Bitcoin blockchain to remain private, such as the conditions under which Bitcoin may be redeemed for spending.

Read:
Bitcoin’s pandemic-era correlation with tech stocks disappears
Bitcoin smashes through R1 million – where to next?

Bitcoin price in USD over one month 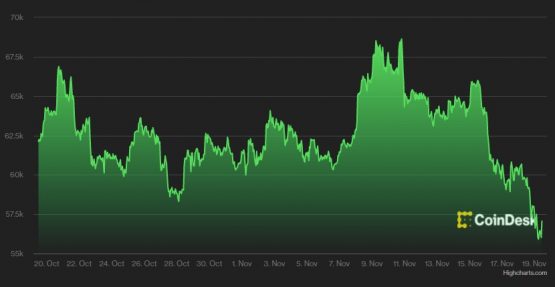 The last time Bitcoin had such a major upgrade was the Segwit upgrade in August 2017, which made the Bitcoin blockchain more secure and scalable.

“Will we see a similar rally this time around? Given how bullish many macro indicators are looking right now, and the rush of new money entering crypto, it is certainly possible.”

Bitcoin’s late November pull-back in price came as volumes remained muted and sellers took advantage of high prices to realise gains. The Relative Strength Index (RSI) on the daily chart is now in oversold territory, which is a reliable trigger for buyers to re-enter the market.

BTC is still on to run to $85 000 to $90 000 in the coming weeks after ‘trapping’ leverage traders, says DecenTrader. Leveraged traders entered the market on BTC’s new all-time highs and got immediately burnt as the price rally fizzled, forcing them to liquidate their positions. Another bullish indicator is the number of “active addresses” relative to price change, which is effective in identifying broad periods where BTC is over- or undervalued.

The indicator has retraced in recent days, representing a precursor for a bullish run-up in price, similar the one we saw at the start of the year.

The rate at which BTC is mined is halved every four years, and that is traditionally followed by a parabolic run-up in price.

The last ‘halving event’ was in mid-2020 and though followed by a substantial price increase, it came nowhere near the parabolic runs experienced in previous halvings, which may be a signal that BTC’s recent run-up in price is just the beginning of a far larger move.