Demand was so strong that activity related to the event caused ripple effects across the entire Ethereum blockchain.
By Olga Kharif and David Pan, Bloomberg 1 May 2022  08:19 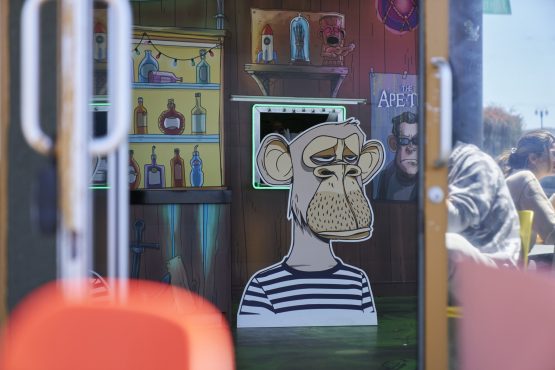 Yuga Labs, the creator of the popular Bored Apes Yacht Club collection of NFTs, shepherded a sale of virtual land related to its highly anticipated metaverse project, raising about $320 million in the largest offering of its kind. Demand was so strong that activity related to the event caused ripple effects across the entire Ethereum blockchain, disrupting activity and raising transaction fees.

Holders of the ApeCoin cryptocurrency who verified their identities jockeyed to buy deeds for the 55 000 parcels of virtual land in Otherside, the project’s planned metaverse game. Anticipation of strong interest had pushed up the price of ApeCoin earlier this week ahead of the sale of the plots, Ethereum-based NFTs called Otherdeeds.

Each plot cost a buyer around $5 800 based on ApeCoin’s price of $19 as of Saturday, plus transaction costs, or “gas fees,” in Ether, which skyrocketed after the sale went live at 9 p.m. New York time as the land grab attracted heavy demand. Transaction costs just to mint Otherdeed NFTs after the launch reached $123 million, with each Otherdeed requiring about $6 000, or 2 Ether, in transaction fees to mint, according to data from Etherscan — or more than the price of the deed itself.

“Yuga Labs’ virtual land sale has triggered one of the highest spikes in transaction fees on Ethereum,” said Jason Wu, founder of decentralised lending protocol DeFiner. “I have seen other NFT launches causing high gas fees, but this is definitely one of the highest,” Wu said.

Yuga Labs initially planned for the sale to be held in a Dutch Auction format in which the price of the Otherdeed NFT would go down over time to prevent Ethereum from being congested with high transaction fees. However, it later scratched the format and went with another plan to cap the number of Otherdeeds that could be purchased per wallet in each wave of the sale. The new plan failed to ease the anticipated congestion. Yuga Labs apologised on Twitter for “turning off the light on Ethereum,” and suggested the possibility of establishing an ApeCoin blockchain. The ApeCoins raised in the sale will be locked up — meaning that they can’t be sold, thus reducing coins in circulation — for one year, according to Otherside’s Twitter account. A Yuga Labs spokesperson declined on Friday to say whom the raised money would go to, or whether large holders of ApeCoin, including Andreessen Horowitz, Animoca Brands and others planned to participate in the land sale.

“Yes, we will be purchasing as well,” Animoca’s Yat Siu said in an email ahead of the sale, adding that there are restrictions on how many NFTs a single digital wallet can buy in different phases of the land deed sale.

Besides the 55 000 Otherdeeds sold Saturday, another 45,000 were to be made available to holders of Bored Ape Yacht Club and Mutant Ape NFTs, as well as Yuga Labs and other project developers, with another 100 000 of the tokens expected to be awarded later to certain Otherdeed holders, according to the Otherside website.

ApeCoin is striving to become widely used in a variety of so-called web3 apps, using digital coins and blockchains. The idea is for owners to be able to access a variety of events, services, merchandise and games. It’s also the governance token of ApeCoin DAO, whose board includes Reddit Co-founder Alexis Ohanian, FTX’s Amy Wu and Animoca’s Siu. Ahead of the Otherdeed sale Saturday evening, OpenSea said it would accept ApeCoin. Venture capital investors that helped with ApeCoin’s March launch, including Andreessen Horowitz and Animoca, were some of the biggest recipients of ApeCoin, which was created as an “airdrop,” in which certain groups of crypto holders automatically received 1 billion tokens as a reward. They and other launch partners received 14%, or 140 million tokens. ApeCoin’s price has nearly tripled since the coin’s release, according to data from CoinMarketCap.

The frenzy around the land is in sharp contrast to much of the crypto market, which has been trading sideways in recent months, with bellwether Bitcoin down about 18% since the beginning of the year. Monthly sales volume on OpenSea, the world’s biggest NFT marketplace, were higher in April than in March, but still down from an all-time-high in January, according to data tracker Dune.

While many apps have sold virtual land for cryptocurrency before, most have seen only a small number of users and transactions. On Decentraland, for example, the number of transactions is down 35% in the last 30 days, according to data tracker DappRadar.

Otherside’s release date hasn’t been disclosed yet, according to the Yuga Labs spokesperson. A trailer from Yuga Labs shows an ape fishing out a bottle and drinking up its contents before launching on an adventure. Metaverse software company Improbable will help to build the Otherside platform.