A rally in cryptocurrencies Tuesday took Bitcoin closer to breaking out of a one-month-old trading range and ignited big jumps in smaller tokens commonly referred to as altcoins.

The world’s largest virtual coin climbed as much as 6.8% to the cusp of $23 000, a level it was last at in mid-June. Ether at one point added almost 11%. Solana also achieved a double-digit percentage gain.

Bitcoin has struggled to escape a $19 000 to $22 000 range as investors lick their wounds from a rout sparked by tightening monetary policy and exacerbated by the toppling of crypto lenders and the TerraUSD stablecoin.

A sustained break above could renew the speculative momentum that can grip crypto assets in the blink of an eye. Expectations for Federal Reserve interest-rate hikes are less aggressive now, which may help. 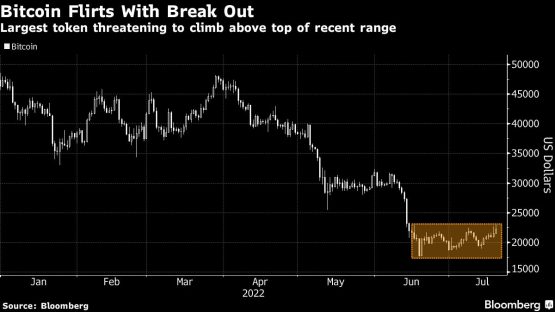 Ether is extending a rally that began last week after developers of the Ethereum blockchain gave a target for the long-anticipated software update that is projected to lower the network’s energy usage.

Altcoins often outperform Bitcoin during rallies and underperform when prices are falling, in part because they’re a favourite of more speculative traders and tend to be less liquid.

“Bitcoin has recaptured the $22 000 level as some short-sellers need to call it quits,” Edward Moya, senior market analyst at Oanda Corp., wrote in a note. Cryptos are starting to look attractive now that expectations for Fed tightening have eased, he added.

The recent rebound in Bitcoin has pared its loss this year to about 52%. It was trading at $22 220 as of 10:27 a.m. in Tokyo. The overall market value of digital tokens has retaken the $1 trillion level.