Money-managers say the asset class is ripe for a big selloff next year.
By Vildana Hajric, Bloomberg 8 Dec 2021  10:24 By many counts, 2021 was the year cryptocurrencies were finally embraced by institutions. Now those same money-managers say the asset class is ripe for a big selloff next year.

Digital assets are the “top contender” for a “major correction” in 2022, with nearly three-quarters of institutions polled saying they’re not an appropriate investment for most retail investors, according to a survey done for Natixis Investment Managers.

Meanwhile, 28% of all institutions surveyed currently invest in cryptocurrencies — and of those, nearly a third said they plan to increase their crypto allocations next year. Overall, 8% of all institutional investors surveyed — meaning all those who do and don’t currently invest in digital assets — plan to increase their allocations next year.

The combined total of assets managed by respondents clocks in at $12.3 trillion. 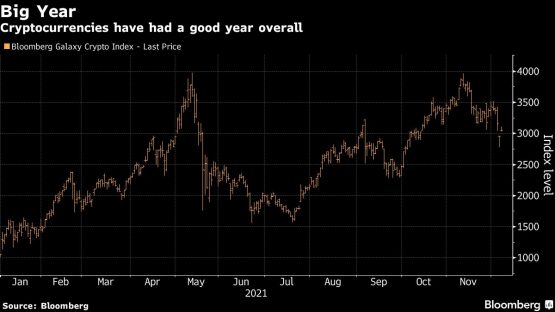 This year saw a number of big fund managers and pensions start to dabble in crypto, while numerous big-name investors famed for their financial markets acumen have also gotten involved. Many said digital assets like Bitcoin could act as good inflation hedges amid a stimulus-heavy environment.

Though crypto is very volatile, it’s not unheard of for different tokens to post huge gains. An index of the largest cryptocurrencies — the Bloomberg Galaxy Crypto Index — added roughly 200% so far in 2021.

In Natixis’s survey, about 40% said they recognize cryptocurrencies as a legitimate investment option though central banks will eventually need to regulate them.

Dire predictions for its demise have been a constant for Bitcoin, the largest and original cryptocurrency, since its debut a little more than a decade ago. Most have been to little avail. Since breaking into the mainstream consciousness, Bitcoin has jumped more than 5,000% over the past five years.

The survey from Natixis was conducted by CoreData Research in October and November and encompasses 500 institutional investors across multiple countries. That includes four central banks, more than 20 sovereign wealth funds and more than 150 corporate pension plans.