Here’s a look at some of the most popular bitcoin-related stocks.
By Suzannah Cavanaugh, Bloomberg 31 Jan 2021  09:26 His best bet so far: a 1,400% gain on bitcoin miner Argo Blockchain Plc, he claims. Vulicevic, who lost his job in retail during the pandemic, is one of the many individual investors behind a frenzy for crypto trading — lured by the thrill of big returns and a belief that blockchain technology is on the cusp of revolutionising the world of modern finance.

Vulicevic says he first got hooked trading foreign exchange on a demo Trading212 account, but then started using his savings to buy stocks and crypto coins, doing his own research on Reddit boards like r/pennystocks.

“When I started to see the price fluctuations, it was like a dopamine rush,” said Vulicevic, who lives in Surrey, a county southwest of London. “But when I started to learn more, like understanding the technology, the under-the-hood stuff and how it could perhaps change the world, that is when I realised this could be a serious chance for me to profit on a technological evolution event.” 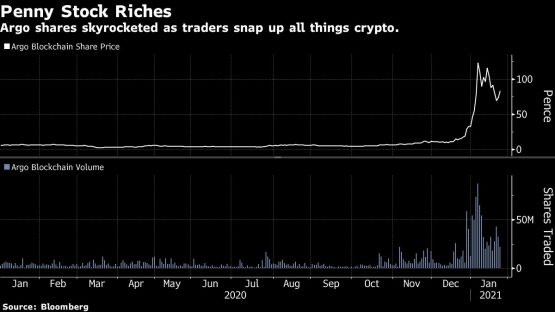 Even though blockchain technology is still relatively niche, Vulicevic said he’s confident in the potential for it to create more trustworthy, transparent financial system, like “smart contracts” that directly connect counterparties.

“We don’t know how our banks lend out our money, who they give that money to or just in general how they operate in terms of risk management,” he said.

There’s only a handful of listed crypto-related stocks worldwide, most of them like Argo run high-speed computers working on time-intensive puzzles to “mine” coins. Speculative investors are gravitating to the mining stocks and more obscure crypto assets, with names like Dogecoin and SushiSwap, as a way to mint bigger returns. And the fact that bitcoin miners tend to be unprofitable or just barely in the black isn’t much of a deterrent.

Argo was the most-active stock on UK trading platform Hargreaves Lansdown last week, making up 4% of all purchases and 3% of sales. The the stock has pulled back along with bitcoin, but still up some 500% since December.

While bitcoin prices tend to move in the realm of 5% to 10% a day, it’s not uncommon for the mining stocks to swing 20%. The volatility cuts both ways, and when crypto prices fall, the miners crash. In the 2017 run-up, Riot Blockchain Inc. peaked at $38 and sank to $1.50 a year later. The popularity of crypto stocks has mirrored the rise of GameStop Corp. and other small companies on Reddit’s boards, where a get-rich-quick attitude and distaste for the financial establishment lures new traders into some extremely risky bets.

“The typical crypto investor is young and male, which means that they are more predisposed to take risk than the median investor,” said David Yermack, finance department chair at New York University Stern School of Business. “The volatility of crypto doesn’t faze them, and to many, it’s actually part of the attraction.”

Here’s a look at some of the most popular bitcoin-related stocks:

Founded in 2018, Argo counts itself as the only crypto miner listed on the London Stock Exchange. The company runs data centers in North America, including a 40 000-square-foot facility in northern Quebec.

The Castle Rock, Colorado-based company was formerly a biotech firm called Bioptix before rebranding in 2017 to focus on crypto. It has a mining facility in Massena, New York.

Financials: $16.6 million loss in the nine months to September

Marathon Patent Group has computers in Montana and North Dakota, and recently announced it bought $150 million worth of bitcoin for its Treasury reserves.

There! I fixed it for you.