The digital currency Ether was close to a two-month high amid a software upgrade that will trim the pace at which fresh tokens are minted.

In some ways, the optimism about the upgrade, known as London or EIP-1559, resembles the hoopla surrounding past reductions in the block rewards for Bitcoin miners. While so-called halvings were planned events, Bitcoin typically rallied in anticipation that demand would either remain steady or increase while the pace of issuance slowed.

“While this upgrade doesn’t explicitly put a hard cap on ETH like Bitcoin’s 21 million it should slow the net new issuance of ETH, decreasing its supply, and increasing the asset’s scarcity,” Fundstrat Global Advisors LLC strategists wrote in a note Wednesday. 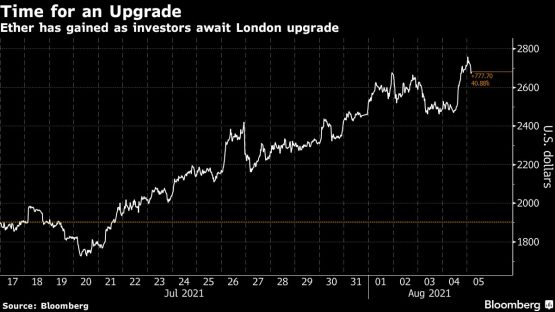 Still, Ether — like Bitcoin — is well off its record highs. Speculative excesses have been expunged and Ether has earned its status in the crypto ranks, said Bloomberg Intelligence’s Mike McGlone.

While the upgrade could be behind Wednesday’s rally, McGlone also likes it for the long-term. “I like the macro go-to platform builder foundation for Ethereum, per the digitalization of money and finance,” he said.

The London change will split up the roughly 13 000 new Ethers issued on a daily basis for miner payment “gas fees” into three parts. One of these, the minimal or base fee that users pay to process transactions, will now be removed from circulation in a process known as burning. Some analysts have called it one of the most important upgrades in Ethereum’s history.

In addition, the supply could decline further once the Ethereum blockchain moves to a different mechanism of verifying transactions, which could happen in the first quarter of next year. Such a new verification system will use computers supporting the Ethereum network to stake Ether coins instead of miners in most cases.

“The most exciting thing about the Ethereum London upgrade is that it burns Ethereum, which is great for the price of ETH and a big win for speculators,” Matthew Gould, founder of Unstoppable Domains, an Ethereum-based blockchain domain name provider, said in comments Tuesday. “However, the upgrade only represents a minor improvement to the network, with major improvements coming next year.”