Miners with a direct energy source and power assets tend to enjoy a much lower price.
By Jialiang David Pan, Bloomberg 20 Mar 2022  22:33 When Beowulf Mining Plc built a data centre in Montana for a major Bitcoin miner in 2020, the three-decade old energy company saw a big opportunity.

Whereas its client Marathon Digital Holdings Inc. was reliant on third parties for electricity, Beowulf had direct access to power in what could be a profitable play if it was to start mining Bitcoin itself.

The bet paid off and in filings to take its crypto offshoot TeraWulf public in 2021, the business projected having 800 megawatts of mining capacity and 10% of the Bitcoin network’s current computing power by 2025.

The company is just one of a handful of energy groups to discover Bitcoin mining from clients before building out their own facilities, including CleanSpark Inc., Stronghold Digital Mining Inc. and Iris Energy Ltd. And with lower operational risks and wider profit margins, energy firms are becoming a major force in crypto.

“Energy companies tend to be very conservative by nature and they are often regulated,” said Paul Prager, chief executive officer of TeraWulf. “We are early adopters because we had a front-row seat in our partnership with Marathon.”

While miners can have a decent margin on 5 cents per kilowatt, those with a direct energy source and power assets tend to enjoy a much lower price, said Gregory Beard, chief executive of Stronghold.

“If you are buying power from a producer and paying a third-party operator to manage the data center, you are going to have lower margins than those that do it themselves,” Beard said. 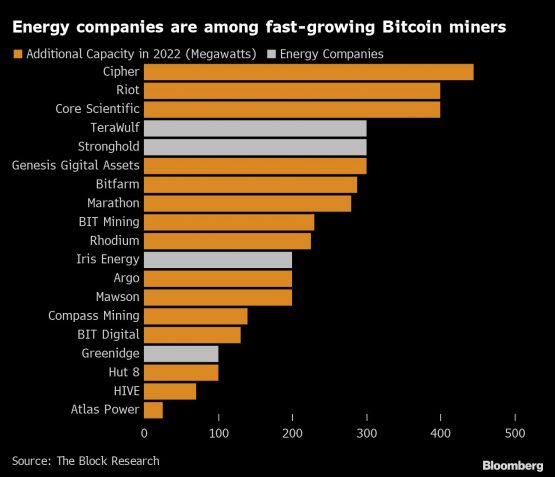 That extra profit could give energy companies an edge over competitors as the Bitcoin mining industry’s lucrative margins have been compressing. With the price of Bitcoin still down 40% from a high in November and the war in Ukraine propelling energy prices higher, margins have contracted to about 70% from 90%, according to analysts. With Bitcoin block rewards also programmed to be cut in half in less than three years, further pressure is also expected.

“It is not only the efficiency from the commercial perspective but it is from a risk perspective where we are better built to handle the downside,” Prager said. “When a transformer goes out on site, you are not calling a third party service firm to come in to repair it, putting in a change order, paying them overtime and hoping that in two to three weeks that transformer is repaired.”

Typically, Bitcoin miners will pay hosting sites to not only build their data centers but host, run and maintain their machines. Fees for such services have also been on the rise since Beijing’s ban on crypto mining gave U.S. miners a multibillion dollar windfall, with many able to get much more Bitcoin from the network with the same input.

The Bitcoin network is programmed to give a fixed number of rewards in the token when miners successfully processes a block. The more computing power a miner or a group of aggregated miners has, the more likely the miner will receive the rewards.

Earlier adopters of Bitcoin mining in the U.S. such as Marathon and Riot Blockchain Inc. are still dominant in terms of computing power.

But another advantage energy-turned Bitcoin miners might enjoy over peers is their willingness to sell the Bitcoin they mine, unlike some crypto enthusiasts promoting the hodl, or “hold on for dear life” mantra.

With the recent slide in Bitcoin prices, companies like Marathon have been shoring up balance sheets and turning to debt and equity capital markets to raise money. Meanwhile, CleanSpark has not sold a single share of equity since last November, said Matthew Schultz, executive chairman.

“Instead of selling part of the company, what we sell is a small portion of the Bitcoin that we mine,” he said. “It costs us about $4,500 at our company’s own facilities to mine a Bitcoin at today’s price; that is a 90% margin. I can sell Bitcoin and use that to pay for my facilities, operations, personnel and growth, and not dilute my shareholders.”