NFT hype is on the rise as market steadies after slump

As a handful of new products and initiatives revive enthusiasm for a market that lives and dies on hype.
By Olga Kharif, Bloomberg 23 Apr 2022  11:25 Sales of nonfungible tokens are steadying after a sharp slump earlier this year, as a handful of new products and initiatives revive enthusiasm for a market that lives and dies on hype.

Weekly NFT sales volume is still about half it was in January when there was a blitz of big-ticket sales and celebrity collaborations. But the market is recovering, with weekly volume now up about 32% from a low in March, according to data from Nansen, a blockchain analytics firm.

The market for NFTs remains small, but it is regaining momentum as new products aim to entice users to trade items like digital art of cupids or penguins. This week, a new NFT index launched in addition to a trial version of a marketplace by Coinbase Global Inc., which could lead to a jump in transactions. There were about 200 000 daily unique wallets interacting with NFTs in the first quarter, according to DappRadar. Meanwhile, Coinbase had about 89 million verified users at the end of last year. 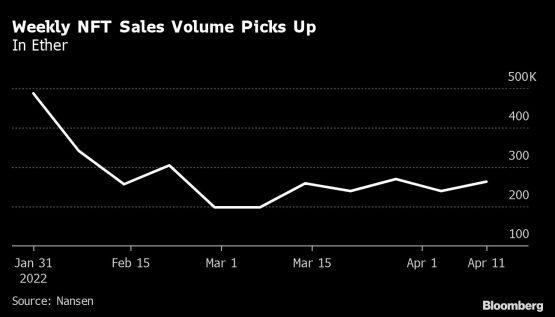 On Wednesday, Index Coop launched the JPG NFT Index, which lets investors bet on blue-chip NFT collections like CryptoPunks by buying a single token on the Uniswap crypto exchange. Already, “demand has been exceptional,” according a methodologist for the group who goes by the pseudonym Joseph Knecht, a character from Hermann Hesse’s “The Glass Bead.”

New developments from Yuga Labs, the creator of Bored Ape Yacht Club, one of the most successful NFT collections, may also be fueling enthusiasm. In March the group raised $450 million for an expansion. Its new ApeCoin now has a roughly $4 billion market value, according to CoinMarketCap. Plus, last week Coinbase announced a Bored Ape film series.

Whether the current upswing lasts remains to be seen. “Given the macroeconomic outlook, it may be too early to interpret if this recovery is a short one,” said Louisa Choe, an analyst at Nansen.

The NFT market is given to wild swings. One in three NFT projects have little or no trading activity, according to Nansen, as users often move on quickly to the next, shinier piece of digital art.

“I expect to see lots of ups and downs over the next few months,” said Aaron Brown, a crypto investor who writes for Bloomberg Opinion. “We’ve seen some successful launches with less hype than earlier NFTs … But I don’t get excited by week-to-week news.”