Matthew Tweed is worlds apart from Wall Street traders. The 20-year-old finished high school just two years ago, never went to college and works out of his bedroom at the family home in Surrey, England.

Yet thanks to the fragmented new world of crypto, Tweed is making markets in Bitcoin derivatives with his one-man operation, which is connected to two of the largest exchanges — alongside the hedge fund pros.

After learning how to build algorithms from a stranger on Reddit, he’s trying to get rich in digital currencies before more institutional players enter the industry in droves.

“I’ve very much enjoyed doing it independently — not having to work for half a decade as a young analyst at a bank in 100-hour weeks,” he says over lunch in a cafe near his home, before the start of his work day. “I can do that for myself but somewhat on my own terms.”

His ambitions would be nigh impossible in highly regulated and liquid markets like stocks where the deep-pocketed pros with their high-frequency tech ramp up the barriers for entry for the little guys.

Tweed, who incorporated his one-man band as Pine Financial, seeks to make money from the spread between the bid and ask quotes for Bitcoin perpetual futures — a uniquely crypto derivative for speculative wagers — whenever it looks profitable.

Thanks to a reliable slew of trading opportunities that help returns grow over time, Tweed says 100% annualized gains can be reasonably expected, declining to disclose precise figures. An executive of an exchange where Tweed is active confirmed he’s a competitive low-latency market maker.

He’s a small-time player in the industry, which overall now sees hundreds of billions of dollars changing hands every day. Chicago trading firms like Jump Trading and Tower Research dove in a few years ago, and transplants from the likes of Goldman Sachs, Susquehanna International Group and Jane Street are increasingly a common presence.

But crypto trading remains slow and decentralised — Coinmarketcap.com lists more than 300 exchanges — while data and access are free, putting it within reach of Reddit-fueled amateurs. Rather than relying on advanced math or engineering wizardry involving fiber-optic cables or towers next to data centers, trading the crypto micro-structure is a different beast from stocks.

“Everything about the space is just set up differently,” said David Fauchier, who allocates capital to quant managers for Nickel Digital’s Factors Fund. “It’s a completely different skill set.”

Modeling and coding skills are important, but much of it comes down to a good grasp of the crypto market’s many quirks. For instance, in traditional markets, high-frequency firms put their servers near the exchange’s to maximise speed, a move known as co-location.

In crypto, most platforms are run on the cloud, so Tweed executed a series of trades to figure out the location of a given exchange’s servers, a common strategy pursued by low-latency traders. 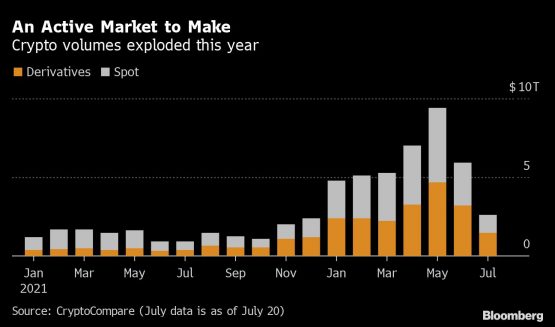 With the high volumes across a multitude of coins, derivatives and exchanges, market making has been a profitable crypto strategy in the bull market. It’s also one way quant long-short funds have been using to generate income, according to a report by PricewaterhouseCoopers and Elwood Asset Management.

Other than the bid-ask spread, some exchanges also pay high rebates to liquidity providers, while some token issuers pay dealers to trade their assets.

That’s not even to mention decentralised finance, where practically anyone can be a market maker by staking their coins in a liquidity pool that then automates the buying and selling with a mathematical formula. So-called yield farmers locked in nearly $23 billion worth of tokens at exchanges on Wednesday, from just $5 billion at the end of 2020, DeFi Pulse data show. The industry has also drawn more sophisticated market makers such as Wintermute, whose co-founders hail from Dutch algo trading firm Optiver.

Sipping his can of soda in a crimson hoodie, Tweed says now is just the time for early converts to go all-in, given the abundant opportunities.

“You don’t know necessarily if cryptocurrency is going to be the same in a decade,” said Tweed. “So you might as well use it while you got an advantage.”

Interesting and utterly terrifying at the same time.

None of these articles ever mention the fact that the only way to make money from crypto currency is to sell it to some other sucker… So ultimately it’s a net-zero game for society at large.

I love the Blockchain tech and what it potentially offers, but all this waffle around trading and making money is just about selling to someone else for more than you paid.