Criminal charges would mark one of the most significant developments in the US government’s crackdown on virtual currencies.
By Tom Schoenberg, Matt Robinson and Zeke Faux, Bloomberg 26 Jul 2021  16:57 A US probe into Tether is homing in on whether executives behind the digital token committed bank fraud, a potential criminal case that would have broad implications for the cryptocurrency market.

Tether’s pivotal role in the crypto ecosystem is now well known because the token is widely used to trade Bitcoin. But the Justice Department investigation is focused on conduct that occurred years ago, when Tether was in its more nascent stages. Specifically, federal prosecutors are scrutinising whether Tether concealed from banks that transactions were linked to crypto, said three people with direct knowledge of the matter who asked not to be named because the probe is confidential.

Criminal charges would mark one of the most significant developments in the US government’s crackdown on virtual currencies. That’s because Tether is by far the most popular stablecoin — tokens designed to be immune to wild price swings, making them ideal for buying and selling more volatile coins. The token’s importance to the market is clear: Tethers in circulation are worth about $62 billion and they underpin more than half of all Bitcoin trades.

“Tether routinely has open dialogue with law enforcement agencies, including the DOJ, as part of our commitment to cooperation and transparency,” the company said in a statement. Its corporate structure consists of a tangled web of entities based in the British Virgin Islands and Hong Kong.

Federal prosecutors have been circling Tether since at least 2018. In recent months, they sent letters to individuals alerting them that they’re targets of the investigation, one of the people said. The notices signal that a decision on whether to bring a case could be made soon, with senior Justice Department officials ultimately determining whether charges are warranted.

The probe is reaching a tipping point as stablecoins attract intense scrutiny from regulators. The US Treasury Department and Federal Reserve are among agencies concerned that the tokens could threaten financial stability, and are obscuring transactions tied to money laundering and other misconduct because they allow criminals to make payments without going through the regulated banking system. Treasury Secretary Janet Yellen said last week that watchdogs must “act quickly” in considering new rules for stablecoins. 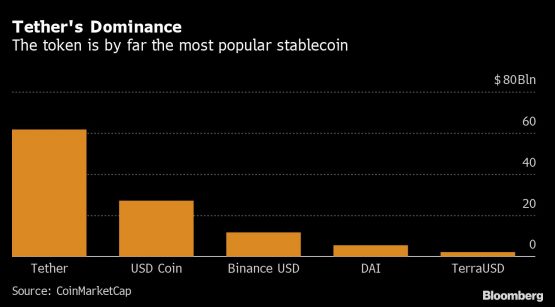 A hallmark of Tether is that its creators have said each token is backed by one US dollar, either through actual money or holdings that include commercial paper, corporate bonds and precious metals. That has triggered concerns that if lots of traders sold stable coins all at once, there could be a run on assets backstopping the tokens. Fitch Ratings has warned that such a scenario could destabilise short-term credit markets.

Tether was first issued in 2014 as a solution to a problem plaguing the crypto market: banks didn’t want to open accounts for virtual-currency exchanges because they feared touching funds tied to drug trafficking, cyberattacks and terrorism. By accepting Tether, exchanges could give traders a way to park their balances without being exposed to Bitcoin’s price gyrations. And funds could be transferred instantaneously from exchange to exchange.

But Tether’s corporate side still needed banks to hold its money and process customer transactions. One early relationship that soured was with Wells Fargo & Co. In 2017, the Tether Ltd. affiliate and Bitfinex — a crypto exchange with common owners and executives — sued Wells Fargo for blocking wire transfers that had been sought through Taiwanese banks.

In the lawsuit, Tether Ltd. and Bitfinex said Wells Fargo knew, or should have known, that the transactions were being used to obtain US dollars so clients could purchase digital tokens. The companies dropped the case shortly after filing it.

In the course of its years-long investigation, the Justice Department has examined whether traders used Tether tokens to illegally drive up Bitcoin during an epic rally for cryptocurrencies in 2017. While it’s unclear whether Tether the company was a target of that earlier review, the current focus on bank fraud suggests prosecutors may have moved on from pursuing a case tied to market manipulation.

Tether has already drawn the ire of regulators. In February, Bitfinex and several Tether affiliates agreed to pay $18.5 million to settle claims from New York Attorney General Letitia James that the firms hid losses and lied that each token was supported by one US dollar. The companies had no access to banking in 2017, making it impossible that they had reserves backing the tokens, James said. The firms settled without admitting or denying the allegations.

Whilst I am a massive proponent of Bitcoin, I do not hold the same view for all crypto currencies especially those like Tether and central banks.

The value of said product has always been how much someone is willing to pay for it, the transfer medium used should be a finite resource that cannot be increased or decreased at will. Anyone who acts in a way that can simply increase the volume of the transfer medium is in my view guilty of currency manipulation and labelled a fraud.

The gold standard for all its worth relied on the fact that gold is a finite resource and therefore the main transfer medium whilst fiat currencies are simply a derivative of the golds value.

Bitcoin
Nobody can create additional bitcoin with out exhausting resources, in the same way as asking Picaso to repaint any of this works, it is therefore of finite value. The price will always be in cantropposto state to fiat currencies.

Notice the inflation which has crept up so quickly, well the FED just printed an addition 20% of all US Dollars into existing without any tangible backing.

Although I do not always see eye to eye with PurgeCoin (I appreciate the discourse, keeps things interesting), I do share a distaste for Tether. Please read up on the whole Tether story, there are so many layers to that story and it is rather frightening that Tether has become so big with so little oversight.