The Fear and Greed index has wallowed in extreme fear for more than a month. Historically, that’s been a good time to buy.
By Ciaran Ryan 4 Jul 2022  00:01 While some investors seem unperturbed by the aggressive crypto sell-off, few are calling an end to this bear market just yet. Image: Erhan Demirtas/Bloomberg

June was bitcoin’s second-worst month since its launch 13 years ago, and the cryptocurrency is now down 72% from its high above $68 000 in November 2021.

The coin dropped 38% in June alone, breaking through several key technical indicators – the 200-week moving average is now trading at the low end of its cost of production (the range is between $20 200 at the low end and $33 700 at the high end).

Satoshi Nakamoto, the reputed founder of bitcoin, noted that the “price of any commodity tends to gravitate toward the production cost. If the price is below cost, then production slows down. If the price is above cost, profit can be made by generating and selling more.”

As the chart below illustrates, there is a clear correlation between bitcoin (BTC) and the risk-heavy Nasdaq. The sell-off was sparked by fears of recession, war in Eastern Europe, rising inflation and some catastrophic failures, such as the TerraUSD stablecoin and its sister coin Luna.

Then came rumours that crypto lender Celsius may not survive, after freezing the funds of 1.7 million users due to extreme market conditions. As if that wasn’t enough, crypto hedge fund Three Arrows Capital told investors it had invested $200 million into the collapsed Terra/Luna eco-system. 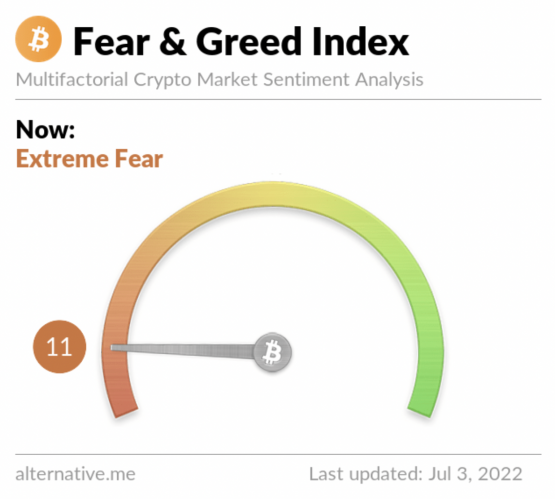 The price is barely clinging to $20 000, having tested $17 700 in June. The chart below shows BTC in a downward descending channel; it would need to break $25 000 to indicate a short-term trend reversal.

Technical analysts expect BTC to trade in a fairly narrow range, though a drop to $13 000 is a possibility. Excitement is nevertheless building that a bottom is imminent.

“In the past, BTC has been a steal under its realised price i.e aggregate cost basis of all coins in supply. The realised price is currently sitting at around $22 500,” tweeted Game of Trades, a popular site for technical analysis.

In the past, #Bitcoin has been a steal under its realized price i.e aggregate cost basis of all coins in supply.

The realized price is currently sitting at around $22,500. pic.twitter.com/8HDryCvjSx

Bitcoin maximalists like Michael Saylor, CEO of MicroStrategy, seem distinctly unperturbed by the aggressive sell-off. Despite taking a massive hit to its bitcoin-laden balance sheet, MicroStrategy announced last week that it had purchased an additional $10 million BTC at an average price of $20 817, giving it a total holding of 126 699 BTC acquired for a total of $3.98 billion at an average price of $30 664 per coin.

“I don’t think BTC has hit the bottom yet, but I am sure the bull market will come back,” Jimmy Zhao, founder of crypto exchange ZBX, told CoinDesk. “I recommend buying bitcoin while the price is low and holding on to it, because in the next bull run, its price will hit $100 000 at least.”

In the last bear market in 2018, BTC lost 84% of its value before rebounding to break new all-time highs.

Few are calling an end to this bear market just yet, but the BTC faithful are starting to acquire at these low prices, believing the next bull run will again break all-time highs.

Before that happens, the short sellers will have to be washed out of the system, and that may take weeks or even months.

“I recommend buying bitcoin while the price is low and holding on to it, because in the next bull run, its price will hit $100 000 at least.”