Bitcoin plunged to the lowest in about 18 months after the freezing of withdrawals by the Celsius lending platform added to concern that systemic risk in the crypto ecosystem will accelerate the digital-asset market meltdown.

Other cryptocurrencies also declined as a broader sell-off continued.

The MVIS CryptoCompare Digital Assets 100 Index, which measures 100 of the top tokens, dropped as much as 17%.

And the total market value, which topped $3 trillion in November, dropped below $1 trillion as of 10:54 New York time on Monday, according to CoinGecko.

“Things can and likely will get worse before they get better.” 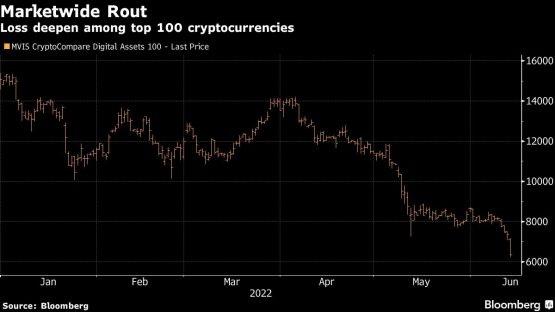 The shares of companies that have embraced crypto also tumbled.

MicroStrategy Inc, the software company that made buying Bitcoin part of its corporate strategy, fell as much as 28%.

Jack Dorsey’s Block Inc dropped by as much as 10%.

Bitcoin miners Marathon Digital Holdings Inc and Riot Blockchain Inc slumped as much as 19% and 16% respectively.

Binance, the largest crypto trading platform, temporarily suspended withdrawals of the Bitcoin network because of a transaction processing issue.

Withdrawals were still being made on other networks.

The selloff comes as traders are boosting bets for a more aggressive pace of Federal Reserve tightening after data on Friday showed that US inflation jumped to a fresh 40-year high in May.

Cryptocurrencies, which have struggled amid the Fed’s policy in recent months, have been hit particularly hard. The collapse of the Terra/Luna ecosystem last month, and lender Celsius pausing withdrawals on Monday morning Asia time, have further eroded confidence in the space.

“If you do get long, perhaps think about doing so with either a long call spread or short put spread to limit risk” on Bitcoin futures, said Rick Bensignor, president of Bensignor Investment Strategies and a former strategist at Morgan Stanley. “If this dives, there’s no reliable support nearby.”

Traders speculated that Celsius could face further risks if the broader market selloff deepens. A loan worth more than $278 million, one of the biggest single loans on decentralised lending platform MakerDAO, is labelled as a loan made by Celsius, according to data tracker Block Analitica. If Bitcoin falls below $22 534.89, the position will be liquidated, adding more sell pressure for Bitcoin, the analytics firm said.

Data shows that the address used 17 919 wrapped Bitcoin, a version of Bitcoin that can be used in decentralised finance, as collateral for a loan worth $278 490 419 in the decentralised stablecoin DAI. While the blockchain explorer Etherscan didn’t label the wallet as Celsius, a wallet from Celsius sent an additional 2 000 wrapped Bitcoin to support the position. Celsius did not immediately respond to a request for comment on the wallets.

Ether declined as much as 20% to its lowest level since January 2021.

“If Ethereum continues to bleed toward $1 200 [the 200-week moving average] the outlook for other altcoins becomes even bleaker,” said Antoni Trenchev, co-founder and managing partner of crypto lender Nexo.

With assistance from David Pan and Muyao Shen.