For a generation of alienated techies, crypto’s all-for-one ethos was its biggest draw. Now panic is spreading across this universe — and that same ethos is posing what may be the biggest threat yet to its survival.

What started this year in crypto markets as a “risk-off” bout of selling fueled by a Federal Reserve suddenly determined to rein in excesses has exposed a web of interconnectedness that looks a little like the tangle of derivatives that brought down the global financial system in 2008. As Bitcoin slipped almost 70% from its record high, a panoply of altcoins also plummeted. The collapse of the Terra ecosystem — a much-hyped experiment in decentralised finance — began with its algorithmic stablecoin losing its peg to the US dollar, and ended with a bank run that made $40 billion of tokens virtually worthless. Crypto collateral that seemed valuable enough to support loans one day became deeply discounted or illiquid, putting the fates of a previously invincible hedge fund and several high-profile lenders in doubt.

The seeds that spawned the meltdown — greed, overuse of leverage, a dogmatic belief in “number go up” — aren’t anything new. They’ve been present when virtually every other asset bubble popped. In crypto, though, and particularly at this exact moment, they are landing in a new and still largely unregulated industry all at once, with boundaries blurred and failsafes weakened by a conviction that everyone involved could get rich together. Crypto has gone through several major drops in its history — known by its cognoscenti as “crypto winters” and to the rest of finance as a bear market — but the market’s expansion and increasing adoption from Main Street to Wall Street means more is at stake now. Kim Kardashian hawking a cryptocurrency that tanked shortly afterward is one thing, but Fidelity’s plans to offer Bitcoin in 401(k)s could impact an entire generation. Its growth has also made this year’s turbulence reverberate that much more: After crypto’s last two-year hibernation ended in 2020, the sector spiked to around $3 trillion in total assets last November, before plunging to less than $1 trillion.
“It’s got a different flavour this time,” Jason Urban, co-head of trading at Galaxy Digital Holdings Ltd., said in an interview. Galaxy, the $2 billion digital-asset brokerage founded by billionaire Mike Novogratz, benefited immensely from crypto’s rise — but was also one of the industry’s most prominent investors in the Terra experiment. “Truthfully, it’s being a victim of your own success.”

If Terra was this crypto winter’s Bear Stearns, many fear that the Lehman Brothers moment is just around the corner. Just as the inability of lenders to meet margin calls was an early warning sign in the 2008 financial crisis, crypto this month has had its equivalent: Celsius Network, Babel Finance and Three Arrows Capital all revealed major troubles as digital-asset prices plunged, triggering a liquidity crunch that ultimately stems from the industry’s interdependence.

“In 2022, the downturn looks far more like a traditional financial de-leveraging,” said Lex Sokolin, global fintech co-head at ConsenSys. “All the words that people use, like ‘a run on the bank’ or ‘insolvent,’ are the same that you would apply to a functioning but overheated traditional financial sector. Consumer confidence and perception of bad actors definitely played a role in both cases, but what is happening now is about money moving out of deployed, functional systems due to over-leverage and poor risk-taking.” 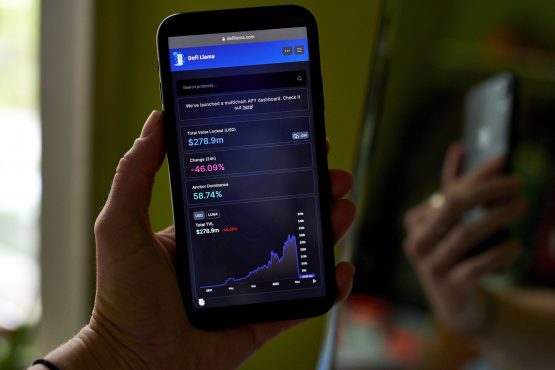 Terra stablecoin pricing on May 16, 2022. The collapse of the Terra ecosystem began with its algorithmic stablecoin losing its peg to the US dollar, and ended with a bank run that made $40 billion of tokens worthless. Photographer: Gabby Jones/Bloomberg

In bullish periods, leverage is a way for investors to make bigger profits with less cash, but when the market tanks, those positions quickly unwind. And because it’s crypto, such bets usually involve more than one kind of asset — making contagion across the market even more likely to occur.

Crypto loans — particularly those in decentralized-finance apps that dispense with intermediaries like banks — often require borrowers to put up more collateral than the loan is worth, given the risk of accepting such assets. But when market prices sour, loans that were once over-collateralized become suddenly at risk of liquidation — a process that often happens automatically in DeFi and has been exacerbated by the rise of traders and bots hunting for ways to make a quick buck.

John Griffin, a finance professor at University of Texas at Austin, said the rise of crypto prices last year was likely fueled by leveraged speculation, perhaps more so than in the previous crypto winter. An environment of rock-bottom rates and ultra-accommodative monetary policy helped set the stage.

“With interest rates rising as well as lack of trust in leveraged platforms, this de-leveraging cycle has the effect of unwinding these prices much more rapidly than they rose,” he said. Though traditional markets often rely on a slow and steady amount of leverage to grow, that effect is seemingly amplified in crypto because of how speculation concentrates in the sector.

Regulators are circling the sector, watching for signs of instability that might threaten their infant plans to rein in crypto. Even rules that were announced in spring have had to change in the wake of Terra’s collapse, with some jurisdictions preparing rules to ease the systemic impact of failed stablecoin systems. Any further crypto failures could ultimately pave the way for tougher rules, making a market rebound any time soon less likely.

“There may be some bear rallies, but I don’t see a catalyst to reverse the cycle anytime soon,” Griffin said. “When the Nasdaq bubble burst, our research found that the smart investors got out first and sold as prices went down, whereas individuals bought all the way down and continually lost money. I hope history doesn’t repeat itself, but it often does.” US regulators are circling the sector, watching for signs of instability that might threaten their infant plans to legislate on crypto. Photographer: Stefani Reynolds/Bloomberg

Now back around $1 trillion, the crypto market is only marginally above the approximately $830 billion mark it reached in early 2018 before the last winter set in, spurring a downdraft that sent the market to as low as about $100 billion at its depths, according to CoinMarketCap data. Then, digital assets were the playground of dedicated retail investors and a select number of crypto-focused funds. This time around, the sector has built a broader appeal to both mom and pop investors and hedge fund titans alike, causing regulators to frequently intervene with statements warning consumers of the risk of trading such assets. As one infamous (now banned) advert on London’s transport network read in late 2020: “If you’re seeing Bitcoin on a bus, it’s time to buy.”

Unlike crypto’s early believers, mass adoption means most investors now view crypto as just another asset class and treat it in much the same way as the rest of their portfolio. That makes crypto prices more correlated to everything else, like technology stocks.

Unfortunately, that doesn’t make most crypto bets any less complex to understand. Though most of the financial world is taking a beating in 2022, the recent crypto market crash was amplified by its experimental and speculative nature, wiping out small-town traders who stuck their life savings in untested projects like Terra with little recourse. And the sector’s hype machine is blaring louder than ever, utilizing tools like Twitter and Reddit that have been strengthened by new generations of crypto acolytes. Exchanges have also done their part, with FTX, Binance and Crypto.com all spending on marketing and high-profile sponsorships.

Sina Meier, managing director at crypto fund manager 21Shares AG, said that extreme level of risk demonstrates exactly why crypto isn’t for everyone. “Some people should definitely stay away,” she said during a panel discussion earlier this month at Bloomberg’s Future of Finance conference in Zurich. Many retail investors “are lost, they just follow what they read in the newspapers. That’s a mistake.”

Before the previous crypto winter, many startups had used initial coin offerings, or ICOs, to raise capital by issuing their own tokens to investors. They suffered when coin prices came crashing down because they had kept most of their value in that same pool of assets, plus Ether, and it worsened when regulators started to crack down on ICOs as akin to offering unregistered securities to investors.

This time around, the funding landscape is vastly different. Many startups born out of the last freeze, such as nonfungible-token and gaming platform Dapper Labs, have sought out venture capital funding as a more traditional route to raising cash. Behemoths like Andreessen Horowitz and Sequoia Capital collectively plugged almost $43 billion into the sector since late 2020 when the last bull market began, according to data from PitchBook.

This means that instead of relying on crypto wealth, some of its biggest players actually have vast reserves of hard currency stored to get them through the blizzard as they work on growing new blockchains or building decentralized media platforms. On the other hand, the recent end to the bull market means they’ve been spending that cash much faster than it’s been coming in. This month Coinbase Global Inc., Crypto.com, Gemini Trust and BlockFi Inc. are among the crypto companies to have announced swaths of layoffs, citing the general macroeconomic downturn for derailing their previously ever-expanding plans. Coinbase, which had hired about 1,200 people this year alone, is now laying off about as many employees in an 18% cut to its workforce.

But thanks to the heights crypto reached in the last boom, there’s still a great amount of earmarked funding sloshing around Silicon Valley’s coffers compared to previous seasons. Andreessen alum Katie Haun debuted her $1.5 billion crypto fund in March, while Coinbase co-founder Matt Huang launched a $2.5 billion vehicle in November. And while VCs might be more careful now about where they put their cash, it’s still got to be spent somewhere.

“None of these companies become mature for many years,” said Alston Zecha, partner at Eight Roads. “We’ve been spoiled over the last couple of years of seeing businesses get these amazing up-rounds after six or nine months. As the tide goes out, there’s going to be a lot of people who are found to be naked.”

Trends to watch in the crypto market

Trends to watch in the crypto market