Six bitcoin will buy you a R1.4m house Put another way, those six bitcoin would have cost a little over R4 100 in 2011. Image: Chris Ratcliffe, Bloomberg

A R1 million house in SA nine years ago would have cost 1 517 bitcoin. Today, the same house would cost slightly more than six bitcoin, even allowing for house price increases since 2011.

This demonstrates the deflationary effects of bitcoin as a store of value.

“In future, people will measure their wealth in bitcoin rather than rands or US dollars,” says Jason Carpenter, CEO of crypto company Etherbridge.

“If bitcoin is a more appropriate way to measure wealth than rands or US dollars, then all sorts of other goods have declined in price by a similar margin, from iPhones to airline tickets and automobiles.”

To compile the following graph, Moneyweb took R1 million as a good starting point for a house purchase in 2011, and then indexed that price to the average annual increase in residential prices since then.

That same house would have increased in value to R1.41 million over the last nine years. We then converted the rand price of that house each year to the prevailing bitcoin price.

If we take bitcoin as a stable unit of currency, it means house prices have declined 99.6% in nine years.

If we take the rand as a stable unit of currency, it means house prices have increased 41% over the same period.

What should also be mentioned is that the price of bitcoin has gone up from R659 to R227 000 over the last nine years – a 344-fold increase. 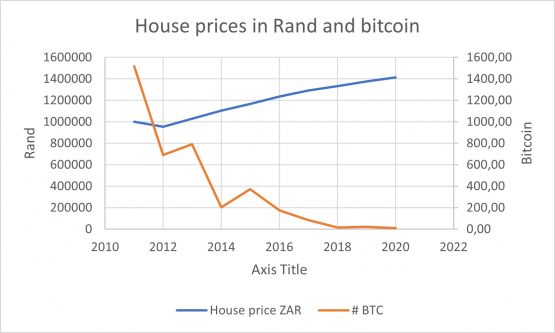 “It’s important when measuring your wealth to consider your unit of account,” says Carpenter.

“Above is the performance of the property market, measured in rands and bitcoin. Fiat money like the rand often results in poor price signals because their supply can increase at a greater rate than what they measure. Scarce assets like bitcoin and gold can serve as better units of account as their supply increases are low and predictable.”

What this says about inflation

Sean Sanders, CEO of crypto investment company Revix, says what this demonstrates is that inflation is a regressive, silent tax. “It’s the reason why you need to spend so much more today for goods and services than you did 10 or 20 years ago.

“Our current monetary system is designed to steadily devalue the purchasing power of a fiat currency. The reason for this lies in its debt-backed nature. Money is created as debt with interest on it. So, in order to have enough currency going around to service the interest payments, the banking system has to create ever-increasing amounts of debt.”

Because there is no cap on the amount of new money injected into the money system, inflation is certain to result.

What this means in practical terms is that a new bitcoin is created roughly every 96 seconds. That doesn’t sound like a long time, but far more rands than bitcoin are injected into the system over the same period. This means demand for bitcoin should increase relative to rands.

Read: Is this what the charts look like before a monetary collapse?

“The problem with fiat currencies is that there’s an unlimited supply,” says Sanders. “Over the long term, a fiat currency [such as the rand or dollar] is almost certainly not going to act as a store of wealth.”

Yip; and a few tulips could also have bought you a nice house (https://en.m.wikipedia.org/wiki/Tulip_mania) … tulips, gold and fiat currency have little economic value…

This is a very old story —- just the supposed “asset”has changed for the modern era.

The few differences between tulips and Bitcoin is that anyone could grow tulips, and it had an expiry date, where bitcoin is a blockchain-based Cryptocurrency of which a finite amount can ever exist and it’s immutable nor is it permissioned – so manipulation of Bitcoin like double spending cannot happen so comparing Bitcoin to Tulips might seem plausible but its actually not even close if you understand the technology – bitcoin has been with us since 2007 the Tulip craze came and gone very quickly. Today there exists over 7800 Crypto Currencies based on the fundamentals of Bitcoin’s Blockchain.

OK, so I get there is a limited supply of Bitcoin – But what about all the other crypto’s – Surely it has the same effect of printing money or am I missing the plot completely?

And by your own admittance; there are 7800 different types of cryptos… which means that individually they may be immutable (and corrupted or lost cold storage coons can’t be replaced) but in aggregate as a type of asset —- they are growing.

Same as the number of tulip bulbs, fiat currency, gold bars, bottles of wine and pieces of art…

Limited supply does not automatically imply value —- and my statement still stands of there is no or little economic value attached to these types of asset and they will at best only allow you to transfer wealth.

So anyone can create a crypto yes. But if your Crypto has no use case or is not solving a problem worth solving you wont have much success convincing the community to invest in it.

And just like crypto… there is little economic value to this asset.

The reality is you are lumping BTC in with lots of other crypto’s of which many are based on a totally different system.

In other words, its like taking Apple shares, conflating it with Steinhoff, and then saying ALL shares are bad.

Wow, one would have thought you possessed more logic than that !???

You probably haven’t bothered to research Bitcoin, hence your obvious ignorance [ are you a Baby Boomer by any chance ?…when internet came out you were clueless about that too ]

The bitcoin graph seems to be the inverse of what its supposed to portray.

The fact that fiat currency is created out of thin air is true. Just look at the current devaluation of the US $. Fed is printing money like its going out of fashion.

When we started selling Bitcoin Mining hardware on our site 2015 we encountered customers that actually evicted tenants from small properties and replaced the tenants with Bitcoin miners – Back in 2016/2017 you could run between 6 and 9 Antminer S9 units consuming around 1350watt of power each per property and the income was in the vicinity of between R2500 to R5000 in profit after power cost per Miner. This posed a vast amount of extra income generated over and above the amount a tenant could possibly pay for renting the property.

If you trade as an individual then you need to declare capital gains on the profits you make when converting it to Fiat from Crypto.

There are countries that have very good Crypto friendly tax laws like Lichtenstein and Estonia.

We have seen some institutions also offering VISA cards you can put your crypto on and spend it directly from the card.

So why are Property Markets and luxury new car sales NOT “going through the roof” with all the newly arrived Bitcoin Millionaires!? I’m not seeing it! Spoke to a Mate who works for Range Rover and posed the question ” had any buyer ever paid in Bitcoin or claimed that they had made the money for the purchase from Bitcoin”, in 5 years of selling he says not one person had!! Why is no one taking profit, if the profit comes from a non value add, then it’s there for the blowing, where is the hard cash going??

@ Snowy….to answer your question: ‘Back into BTC’

60% return in the last few months.

And the problem here in SA is most ppl here are way too indoctrinated/conservative to put their money into BTC and instead trust their hard earned cash with the same old chino wearing ‘financial advisors’ that milk them for all they worth.

I bought Bitcoin through shares albeit using a small amount of money. If something looks to good to be true I am careful but I also did not want to lose out so I only invested a small amount.

hi i want to know how do i buy bitcoin

6 Bitcoin can now buy you a 1.5Mill Rand home lol R100k up from publishing of this article