We are entering the Ethereum age, say its advocates. The network already handles more than $31bn in transactions a day, more than twice that of Bitcoin.
By Ciaran Ryan 3 Nov 2021  11:01 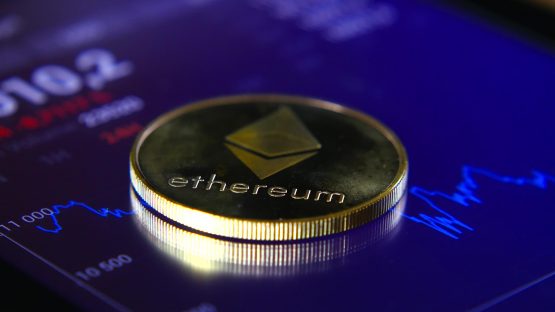 Part of the strangeness of cryptos is getting used to voluptuous price gains.

Farzam Ehsani, CEO of crypto exchange VALR, explains why this is an extraordinary success story: “Ethereum is currently worth half a trillion dollars. Some companies alone are 5x this value, and for an ecosystem that has the potential to disrupt much of the traditional world of finance, many think Ethereum, like the valuation of the cryptocurrency space overall, is extremely undervalued.”

Microsoft and Apple are each valued at about $2.5 trillion, with Saudi Aramco coming in third at $2 trillion. Next up is Google parent company Alphabet at $1.9 trillion and Amazon at $1.7 trillion.

In sixth place is Tesla, worth $1.18 trillion by market cap, and just a shade ahead of Bitcoin, worth $1.15 trillion this week.

Read:
Tesla is the first junk-rated company to get a $1trn valuation
Ethereum jumps to record high amid crypto’s decentralised boom

Crypto enthusiasts believe it is only a matter of time before Bitcoin surges past Microsoft and Apple to lay claim to the world’s most valuable asset.

As of September 2021, Tesla Inc co-founder Elon Musk became the world’s wealthiest man with a net worth of $292 billion, knocking Amazon’s Jeff Bezos off the number one spot.

Bitcoin’s ascent through the value rankings is an astonishing story in itself, but perhaps just as riveting is the story of Ethereum’s rise from zero to $507 billion over the last four years.

To put that in perspective, it puts Ethereum ahead of JPMorgan Chase, a banking group with a lineage extending back more than 100 years and the 12th largest group in the world as measured by market cap.

It’s taken Ethereum just four years to dislodge JPMorgan Chase from its perch as the world’s most valued banking group.

Ethereum was conceived by Vitalty ‘Vitalik’ Buterin in 2013 as a network where developers could deploy their applications.

Out of that idea came decentralised finance (DeFi) and smart contracts. These are contracts allowing users to lend, borrow, ‘stake’ (earn interest), transfer and transact using ETH as the currency. These smart contracts occur without human intervention.

You can borrow using your cryptos as collateral, without having to submit realms of documents for credit approval.

And no-one wants to know your name, address or whether you lawfully acquired your crypto.

This is the ‘uncensored’ world of decentralised finance.

Fees and grumbles, yet commitment

Users of the Ethereum network pay ‘gas fees’ in ETH, and these are painfully high, a point that has earned Ethereum plenty grumbles from users, who nevertheless return time and again to use it.

To remedy the problem of network congestion and high gas fees, Ethereum has embarked on a series of upgrades known as Ethereum 2.0 which will only fully come into effect next year.

Richard de Sousa, CEO of crypto exchange AltCoinTrader, explains the recent price moves in ETH: “Even though we’ve recently seen Ethereum reach all-time highs, it is in my opinion still incredibly undervalued. This token embodies smart contracts, decentralisation and the Ethereum virtual machine. It is going to be the blockchain or the infrastructure that many decentralised applications (dApps) are built on.

“A lot of people are complaining that Ethereum is unusable because of the extremely high fees that we’re seeing, but this is contrary to what is actually happening.

“The fact that the fees are so high points to the fact that people are using it so much,” says De Sousa.

“It is the strongest network, it has a lot of competitors, but when Ethereum 2.0 launches hopefully in 2022, we’re going to see this network once again go up dramatically.”

It’s all about the flow

Says Brett Hope Robertson, investment analyst at crypto investment company Revix: “It’s all about the crypto money flows. With the amazing run up in BTC price over the last month, countless investors have made profits on that trade and look to shift them into riskier assets. This normally results in investors moving their BTC profits into ETH. Not only this but ETH just became deflationary for the first time a couple of days ago with net issuance of coins going negative due to the amount on ETH ‘burnt’ [or removed from circulation]. This is a very positive mechanism for price.

“As we know, decreased supply and increased demand only leads one way.”

Many analysts see the recent rally in ETH as a mere waystop to much higher levels for the second largest cryptocurrency, with some calling for $10 000 as achievable before the end of the year.

Market analyst Spencer Noon points out that Ethereum dwarfs every blockchain in terms of fees paid, as the network settles $30.5 billion of value every day, more than bitcoin and the $2.5 billion settled by PayPal daily. While Bitcoin is regarded as a digital store of value, and as a rather slender business case, Ethereum generates huge earnings daily.

Another bullish signal for ETH is the number of active daily addresses, which continues to hit new records, signalling that more people are either buying ETH or using it to transact.

The average cost of transacting on the Ethereum network is just shy of $50, aggravated by the network’s inability to processes large volumes of transactions (it currently does 1.3 million transactions a day).

This has opened the door for the emergence of so-called ‘Ethereum killers’ like Solana, Polkadot and Cardano – all of which were designed to overcome the cost and congestion issues facing Ethereum.

There is a race underway for dominance of this space, but so far, Ethereum is out in front.

Forgive my ignorance, but what can I possibly buy with a Bitcoin, that I cannot also buy with a US$ ?