Growing up in the UK in the 1980s, the Christmas season was associated with particular foods and drinks. Pies made from fruit “mincemeat”; the same dried fruits cooked into Christmas pudding; grandparents passing round glasses of sherry.

Believe it or not, that nostalgic memory hints at a long-term risk to the most bullish corner of the global liquor market: China’s sorghum-based firewater, baijiu.

The past few years have seen extraordinary growth for baijiu makers. Kweichow Moutai Co., the maker of the most prestigious brand, overtook Diageo to become the world’s biggest distiller by market capitalisation in 2017. Now it’s in a whole other league, overtaking even Anheuser-Busch InBev and PepsiCo on that measure and within spitting distance of taking Coca-Cola Co.’s crown as the world’s largest beverage company. What’s more, this success has been built on the back not of a valuation bubble, but of relatively pedestrian assumptions about earnings. Kweichow Moutai is on a lower price-earnings multiple than Brown-Forman Corp., Davide Campari-Milano SpA and Remy Cointreau SA. Luzhou Laojiao Co. is cheaper on that measure than any major western distiller.

What could possibly put a cloud on the horizon of this thriving market? The most serious looming risk is embodied in those nostalgic memories of a British Christmas: demographics. Throughout baijiu’s boom, it’s struggled to shake the perception that it’s primarily a drink for older men. Its former image as an unofficial currency of corrupt government officials has receded since a campaign against official graft in the early years of President Xi Jinping’s reign. Still, the connotations of rich older men exchanging drunken toasts remain, even if the drinkers in the stereotype are now more likely to be employed in the private than the public sector.

“Many young people still think that baijiu isn’t for them, that no matter the flavour, it’s not a drink for the young,” according to a China Daily article this year. “Drinking baijiu is increasingly seen as a dated behaviour by younger Chinese uninterested in banquets and bravado,” wrote Jing Daily, a site specialising in the Chinese luxury market.

That association with oldsters is a problem Spain’s sherry industry has been enduring for several decades. In the 1970s and 1980s, exports to the UK, the Netherlands and the US boomed in an unprecedented manner, to the point that bodega conglomerate Rumasa was reported to account for as much as 2% of Spanish GDP. Since then it’s been in long-term decline. Sherry’s core consumers outside Spain have reached a more abstemious age or died out, while younger drinkers shun a product they associate with their grandparents. For all that many wine connoisseurs sing its praises and lament sherry’s fall from grace, it’s hard to see the glory days returning.

This trajectory is a common one in the alcohol business, which lives and dies on the changing demographics of its consumers. One reason Japan’s brewers have been so desperate to acquire overseas businesses while Vietnamese ones have been M&A targets is that beer is drunk by thirsty workers, and Japan’s labour force is declining while Vietnam’s is rising.

The same goes for clear spirits like baijiu. Its success is hard to separate from the fact that China’s population of men aged 40 to 60 increased by more than half over the past two decades, adding about 78 million people to the core baijiu-drinking market. That demographic is set to stagnate over the coming decade, though, before beginning an accelerating decline after 2030. To the extent that the industry is making any inroads with women and younger people, it’s in lower-cost, lighter-flavoured “rice aroma” products where margins are tighter. The giant listed baijiu-makers specialise in the complex, higher-cost “sauce aroma” and “strong aroma” varieties such as Maotai and Luzhou Laojiao, which is quite a different product.

This needn’t be the end of the world. The drinks market’s best defense against unfavourable demographics is “premiumization” — counting not on a larger number of consumers, but a small group paying more and more. Premiumization is already the strategy of the high-end listed baijiu companies, so there’s no reason they can’t keep going with it.

Still, chasing the luxury market is notoriously expensive in marketing terms, and baijiu makers for years have been able to rely on a product that sells itself. 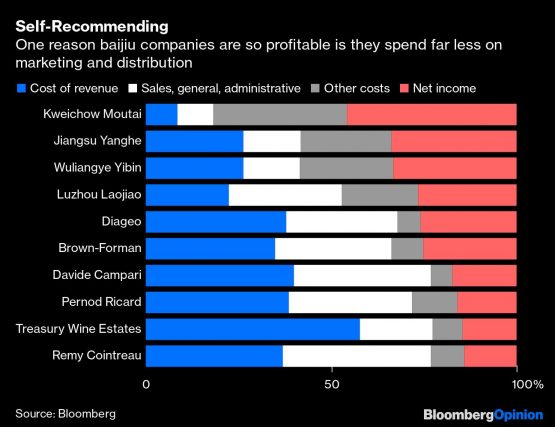 Major distillers typically dedicate a third or more of their revenue to selling, general and administrative costs — mostly marketing and distribution. Baijiu makers are far more thrifty, one reason their profit margins are so much fatter than those of peers. As their core demographic ages out of its drinking habit, though, they’re likely to have to spend more and more converting younger drinkers.

Every cellar manager knows that liquors can get better with age, but the process of maturation has to be carefully monitored and cultivated if the precious drink isn’t to turn into drain-cleaner. Marketing departments of baijiu companies will have to be no less careful over the coming decades maintaining the shine on their storied brands.

One day all alcoholic drinks will be completely shunned – they bring no health benefits and are at the heart of many social ills (crime, marital, neighbourhood problems etc).

They will be replaced by pyschodelic drugs that are safe – and work! Bliss!