‘Fear runs down the spine of many of our people’

Children in Zimbabwe are desperately looking for food, while corruption-exposing journalist Hopewell Chin’ono is still incarcerated.
By Cathy Buckle 3 Sep 2020  00:04 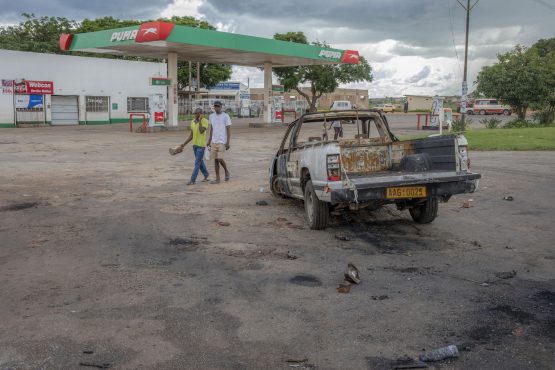 Some of the youngsters who haven’t been to school for six months stave off hunger by ‘harvesting’ sugarcane that falls off trucks. Image: Cynthia R Matonhodze, Bloomberg

On the dusty highway, kids sit on the roadside alongside the potholes. It’s sugarcane-cutting time in the lowveld and the enormous trucks are hugely overloaded with blackened sugarcane sticks being taken from the fields to the processing plants.

As you get closer to the town it’s not just kids sitting by the potholes, but also teenagers and young men with ox carts and donkey carts. As the overloaded trucks go through each pothole some of the sugarcane gets dislodged and falls to the tarmac, where it is hotly pursued by the youngsters. Free sugarcane, hungry stomachs – or both, I asked myself.

The answer came a few bumpy potholes later as kids darted dangerously in front of traffic to grab a stick or two of blackened sugarcane.

Three young boys, out of school for half a year now, thin and barefoot, grabbed the fallen sugarcane and threw it up onto a cart being pulled by four donkeys. Jumping up onto the cart they gestured to their open mouths, asking for food but I had nothing so just waved and called out: “How are you?”

Shouts of laughter rang out and they echoed my question, waving back, their smiles wider than their bellies and warmer than their bare feet.

A teenager with a spiky hairstyle driving a cane-filled cart pulled by a pair of oxen raised his hand in response to my greeting but his eyes told a thousand stories of boredom, missing school and learning, and living a life of grinding toil.

Seeing children using the effects of potholes to get food and driving donkey and ox carts feels like a forgotten era, a lost generation, a world away from the ongoing trauma in Zimbabwe where nothing is normal or predictable in these frightening times.

Five weeks after he was arrested, award-winning corruption-exposing journalist Hopewell Chin’ono was still incarcerated. He was denied bail three times and his internationally-acclaimed human rights lawyer, Beatrice Mtetwa, was banned from visiting or representing her client.

Others who had called for people to join a protest against corruption in July – a protest that never happened – also remain incarcerated, with bail repeatedly denied.

The government rate for US dollars was last week pegged at Z$83 for one US dollar, leaving the many without access to US dollars in a state of penury.

Pensioners who had been living on pensions of US$500 a month – which were converted to Zimbabwe dollars by the government 19 months ago – are now getting the equivalent of US$6, or six loaves of bread, a month.

The inflation rate is now being officially quoted at 837%.

A recent report by Bloomberg says that “should government fail to bring inflation under control, bread will cost at least Z$600 by this time next year”.

And according to the World Food Programme, 60% of Zimbabweans – that’s 8.6 million people – will be “food insecure” by December.

The Zimbabwe Catholic Bishops’ Conference (ZCBC) described the dire situation in a pastoral letter: “Some of our people continue to live in hideouts, with some incarcerated while others are on the run. Fear runs down the spine of many of our people today.

“Our government automatically labels anyone thinking differently as an enemy of the country.”

The Minister of Information, Monica Mutsvangwa, responded by saying the ZCBC pastoral letter had been written under the “evil-minded” leadership of Archbishop Robert Ndlovu, who she said was “fanning the psychosis of tribal victimisation”.

Mutsvangwa said Ndlovu “is inching to lead the Zimbabwe Catholic congregations into the darkest dungeons of the Rwanda-type genocide”.

Chilling words for Zimbabweans to hear 40 years after the massacre of 20 000 people in Matabelelend, for which no one has yet been held to account.

Chilling words that we hope little boys on a donkey cart loaded with sugarcane never have to hear or understand.

Fast fwd and this will be South Africa in a few years.

It has already happened – you only have to look at the large number of white beggars at traffic lights – and is continuing to happen – Zondo commission -.

P.S Why are you still there if the avalanche of disaster is about to hit.
Surely you must flee before disaster strikes.

WHAT IS WRONG WITH THE MONEYWEB RESPONSE FORM?

A result of “ex freedom fighters” trying to run a country after winning “freedom” and their movement not disbanding.

Most of the “freedom fighters” and their supporters are dying out now and it could be that the later generation will eventually vote the last remaining ones out.

This phenomenon is not unique to Zimbabwe it is an African thing.

Only when the “old guard” and their supporters are no more could there possibly be change.

It will be up the the young boys the writer refers to to change their future for the better.

And the deafening silence continues! The whole liberal world shouted and ranted from the hilltops at Ian Smith under whose reign there was no hunger, genocide, or lawlessness. So why are these liberals so quite now? Perhaps it is because these well-heeled folks actually don’t care for the downtrodden people they purport to be caring for!

When they had enough to eat, and there was low unemployment and no hyperinflation, they still took up arms against the Smith government. The fact that they refuse to do so today, and I don’t know why they don’t want to help themselves, leaves me completely cold. They deserve to be poor and starving.

If ZANU,ZIPRA,ZAPU win the election people in towns will walk on sewage until they believe it is normal. All the gains from colonization will vanish. Infrastructure will collapse. Roads will be impassable. Hospitals will be closed. Farms will be destroyed and nothing will be left to feed the nation. Mr Ian Smith November 1975.

“fanning the psychosis of tribal victimisation” is what the Apartheid regime was accused of wrt the killings in Matabeleland some 40 years ago.

A successful counter-intelligence campaign that fanned doubt and generated disaster. Like the deliberate placement of a honing beacon that resulted in the plane crash that killed the Mozambican president Samora Machel.

However, with a 60% loss of food security, and so many on the brink of starvation, an insurgency on a level that once more parallel’s Mozambique cannot be ruled out- especially if increasingly oppressive measures are instituted against well-meaning if vocal opposition in what is a purported “democracy”.

Rather than arming with bibles, the koran and/or ak47’s, these people need 5g, smartphones, tablets, skills transfer, access to land and surplus resources, public or underutilised.

And to be left alone by those who feel they are in power but have no solutions for food, warmth or shelter.

Come to think of it, that is what the average SA youngster also needs most today.

Zimbabwe is the horror child of socialism and racism…a more deadly mix is not known to this world, yet the roots of it are taking hold in even the US…

Zim has fear running down their spine

We need to find a different solution to our political setup. The current DA will NEVER EVER be the ruling party. Accept that and maybe you can move on to finding something else. I have moved on. For now, to keeping my head local and hoping to find a candidate that I like regardless of their party. A home is built from the bottom up and burns from the roof down. Politics is no different.

If Zimbabwe copies the South African constitution and financial system and everything that’s “right” with South Africa, add better corruption and transparency controls through online portals and right to information by citizens for 3rd party audits to freely follow paper trails and the ability for citizen groups to citizen arrest public electorates and employees for transgressions, to enact the death penalty for corruption, to then say to all SA successful farmers here is free land on 99 year lease which is transferable to family decedents on condition they too run the farming business, with a state farm bank granting loans to run the farm. Then to grant all SA citizens who are marginalized or excluded from SA economy like BEE etc. To come work there or create jobs there and gain citizenship in under 2 years. They should also allow people from the world over to come retire there and become the retirement village of the world… Which will genorate influx of retirement salaries spent locally that genorate consumers which enables services and business to thrive. With the implosion of SA Zim can save it self and syphon all functional people from SA… Including skilled labor. Even the usual greedy political class can score i stead of stealing they can earn prosperity dividends… Shares in the economy and well being of the citizens instead of just salaries and corruption… now they got incentive.