There is a lack of understanding of the obstacles that an incoherent government policy creates.
By Amanda Visser 15 Jun 2018  00:09 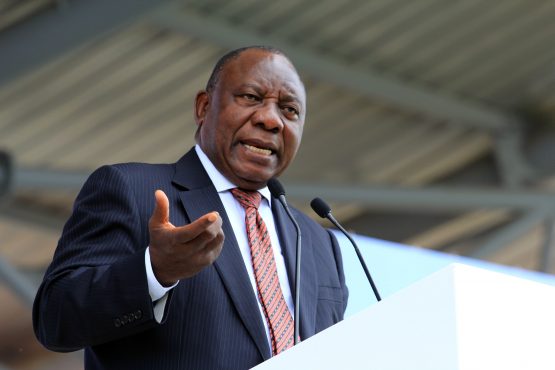 Pressure mounts on the president to get the economy and policy into the positives again. Picture: Moneyweb

The charter is expected to be released within weeks, but industry players are “nervous” that the new minister of mineral resources, Gwede Mantashe, may retain controversial provisions that caused so much concern in his predecessor’s charter.

One might end up back in a court battle if this is the case, says Cron. He commented on the policy problems facing the country in achieving the ambitious target of $100 billion in new investments over the next five years announced by President Cyril Ramaphosa.

“It’s all well to say that the country needs foreign investment, and that it has to be an investment destination – [but] government has got to do more than just talk about it.”

He adds that the mining sector, oil and gas in particular, holds significant investment potential, but the legislation and policy issues must be clarified: “Nobody is willing to invest, or to commit significant funds when they do not know what the rules of the game are.”

Ramaphosa said in April that total fixed investment in the economy has declined from 24% of Gross Domestic Product in 2008 to around 19% last year. This has to increase to at least 30% in the next 12 years.

Cron acknowledges that the Zuma legacy has left the new government with an incoherent policy that is preventing investors from opening their hearts and purses to deliver on the hope of a “new dawn”. While there have been welcoming changes in the management of state-owned enterprises, there is a dire need for a coherent policy that is understood and implemented by all state entities.

Cron says it is critical for government to sift through current legislation and find what it is that investors find concerning. It must then decide whether it is absolutely necessary to keep that legislation. He notes that
Ramaphosa has referred to the country’s “thriving democracy, independent judiciary and strong institutions”.

Cron is not convinced that there is a full understanding of the obstacles created by an incoherent government policy. “Frankly, I still think there is a suspicion in government of business in general. When business raises issues of concern, it is often, although not all the time viewed, with suspicion.”

When looking at issues separately, they might not seem that important, but it is when they are put together that a picture of a jurisdiction that is not particularly investor friendly emerges, even though it is not altogether unfriendly.

There are abundant investment opportunities globally, and especially in Africa, and Cron says South Africa should be going out if its way to make itself more attractive to investors – locally and globally. “I am not sure if that is fully appreciated.”

The introduction of a ‘headquarters regime’ to encourage foreign multinational companies to drive the management of their African operations from a base in South Africa remains a fundamentally good idea. However, strict anti-avoidance rules have left it almost dead in the water. Mauritius has really positioned itself as the “jurisdiction of choice” for establishing headquarters for foreign companies’ African operations.

Cron adds that our corporate tax rate remains high when compared to global standards, and on top of that there is no real tax relief for foreign companies in South Africa.

The committee recommended no change to the current rate. It felt that other policy measures, together with political and social uncertainty, would still act as disincentives for further or new investments. These policy measures include immigration laws, the ability to guarantee electricity and water supplies, security of tenure and corruption.

You have a country that has been LOOTED and NO ONE goes to jail. Why would I invest here?? Dah

Correctly stated, plain and simple, nothing to be substantiated here!

Agree with you Jim 🙂 There’s zero accountability in SA, and it should be (one of the) cornerstones of a western, civilized society.

So it tells me, the Govt (and it’s supporters) leans towards socialism.

Socialist African leaders tax their citizens to death in order to keep servicing the Euro-loans used to bribe their citizens with socialist projects. In short, this is how it works in Africa – the political elite needs foreign loans to fund their plunder and they need taxpayers to service the loans.

All the equity in socialist African countries is siphoned off, via the loans, to land in the pockets of capitalists in the free-market economies. This is how ignorant African voters plunder themselves.

This is a basic law of nature. The resources will eventually belong to those with who respect property rights. Africans beg to be colonized through foreign loans and then they impoverish themselves to pay down those loans. The more incompetent the government, the faster this process becomes because the need for funding increases along with the collapse in governance.

Africans are poor and are getting poorer because they send all their equity to fund the pension funds of Europeans. Africans do this voluntarily, out of their own free will. Actually they beg for the privilege to enslave themselves and to be colonized by capitalists.

@Sensei,this article is about the South African situation and not the African continent as a whole… So when you say “Africans are poor and are getting poorer because they send all their equity to fund the pension funds of Europeans. Africans do this voluntarily, out of their own free will”. In the South African context of this article you referring to all peoples of the Republic… Therefore we should look at a South African solution, which is rainbow-coloured, multi-cultural and all inclusive. White South Africans are suffering too, and they should not consider themselves as Europeans, because they are not and never will be. The truth is; yes they are caucasian, but they will never be European. Like the African-Americans may be negroid but will never be African, and not South African in particular.

I fully agree with your statement. The government classifies me as white, but just like most whites, I have coloured ancestors. My roots are in South Africa. I am a fourth-generation farmer. I am going nowhere. I want only the best for my fellow countrymen. That is the reason why I speak out against the acts of self-sabotage by this government.

My point is that we should not use international loans to fund government failures. We should take responsibility for our situation and elect officials who can implement clean and efficient governance. We as Africans(I include myself) cannot build equity, because the high tax-rate makes it impossible.

Government takes our equity and hands it over to the capitalists(whom they despise) in the form of interest and capital repayments. Our government does this on our behalf – they take our wealth and give it to foreigners, and we still vote for them? Tax-rates should be lowered to incentivize the formation of capital. Capital flows to lower tax jurisdictions. Look at our neighbor Mauritius.

Yes its a mindset. There’s the idea that a piece of land with a cow and five chickens shall bring prosperity and happiness. In reality there’s an ever growing population dependent on capital investment to provide jobs.

ironical…..saw this article next to this one: Eskom can’t guarantee power on Friday – spokesman…say nothing more.

and below that one…..Forgotten at the fringe, SA towns are falling apart

And a lot of clever people said SA will never go the way Zimbabwe has!! Really!!??

Like water always finding it’s level, it’s a numbers game, has to happen!

The problem with SA leadership is they think South Africa is still a special case. This sense of exceptionalism makes them think that it’s ok to tell investors the same drivel they tell their citizens about EWC and so on. They just haven’t twigged that the world has moved on.

CR thinks he can fart against thunder/white capitalism.
when european business thinks of investing in SA ,who does he think they consult Sexwale or Motsepe ? No bro they speak to a WHITE captain of industry , a SA relative or friend and they get the truth how things are at the coalface.
when doing this they hear the stories of govt broken promises, looting and frustration of getting simple documentation passed with our cANCerous politburo.
so, off they go somewhere else and invest where it is service with a smile
stop the lying Cyril and do your job