A different view of the context for a stable and sustainable company.
By Jerry Schuitema 4 Aug 2017  00:13 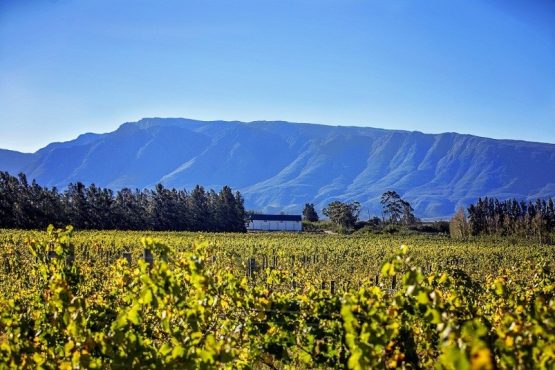 SWELLENDAM – There’s been quite a change in my little space in paradise. What was once largely untouched natural habitat between my home and the creviced Langeberg Mountains, has been replaced with regimented vines and a wine cellar a bit further on. Apart from having a serene space invaded, there was that tug of outrage again at man’s encroachment of nature – the inexorable march of plantation over forest as commerce sweeps it sickle.

One mellows somewhat with the thought that even regimented vines have their beauty. I’m by no means a wine connoisseur and my knowledge of wine did not progress much further than a brief unhappy get together with Lieberstein. But I can appreciate that very few products unlock in such a fine multitude of styles, the mysteries and complexities of nature. But of course it is still man that plays the dominant role: largely responding to the call of commerce and controlling and manipulating inputs and outcomes to achieve maximum returns.

But Olivedale Wine farms is different. Here the enigmatic founder and architect, Carl van Wyk, is allowing indigenous weeds to grow between the rows of different cultivars planted in different selected types of naturally enriched but virgin soil. It’s just one of the many different ways he allows nature to dictate the outcome to produce a symphony of its own. Weather changes or other elements do not concern him, but rather prompt curiosity at what difference it will make to the wine. It’s totally counter-intuitive to conventional winemaking, where markets dictate most of the process; and even differs from organic or “green” wines which adhere mostly only to an avoidance of chemicals in the various stages of wine production.

In this, Carl reflects those creative virtuoso’s in society that are aloof to, yet respectful of market whims and commercial constraints. They seem to operate in a world of their own and follow a code unique to them. It is the one thing that economic theory can neither capture nor explain, yet they represent not only the true spirit of free enterprise but are essential to its success and very often create huge shifts in its destiny. There have been many throughout history, more recently the late Steve Jobs and currently Elon Musk, who has been described as someone “destined to change the course of humanity”. While Carl’s efforts on a much smaller scale can be called symphonies of nature, they create unique symphonies of endeavour.

I view them with some pique. They tend to challenge my perhaps dogmatic view that economies are nothing more than an unwritten contract in which people serve people, and great companies are those that respond to the needs and wants of others. But if the latter thought irritates those who champion the profit motive and self-gain as the true driver of success in business, then the virtuoso’s outright disprove them.

Indeed, one could argue that many, if not most of humanity’s ground-breaking achievements have emanated from them. I simply cannot imagine Elon Musk pondering over Harvard’s reverse income statement to justify his promise to take two tourists to the moon next year.  Not understanding true entrepreneurial genius caused former Apple CEO, John Sculley considerable discomfort after firing Steve Jobs.

That points to a critical element of survival and sustainability for companies in these times of high volatility and uncertainty: the extent to which they can explore and nurture those attributes within their ranks, not always present in one person, but sometimes found in groups and teams. The modern company is beginning to look very different from its predecessors, or, as the Economist once put it: “disrupters are reinventing how the business works”. Organisational theory is not catching up with this trend, and for the most part company systems and structures are not only outdated but tend to strangle those very attributes that will keep them relevant and sustainable.

In a recent essay, Eric Lieu, founder of Citizen University in the US, and Nick Hanauer, venture capitalist wrote: “Markets are a type of ecosystem that is complex, adaptive, and subject to the same evolutionary forces as nature.” This perspective, in the view of a growing body of experts from different disciplines, can be applied to economics as a whole, and challenges most conventional theories and ideologies.

The emergence of “disruptor” and “insurgent” company models reflects this and means that companies are not simply legal entities with structures, prescriptions and procedures, but that they are human eco-systems that constantly evolve as humanity itself evolves. It’s both an intriguing and inspiring thought because it allows a refreshing relationship between companies and their external environment: being shaped by it, but also contributing to it. It also gives a new and refreshing context for company analyses and investment advisors – the kind that can tap seriously into beta potential.

Companies today have to cope and interact with an unprecedented multitude of complexities and variables, and stability can no longer be found simply in structures, systems, procedures and planning. Their survival and sustainability lies in the paradox of finding stability through flexibility.

Olivedale Wine farm is a beautiful place, we drove through there not too long ago.