This chart should scare you 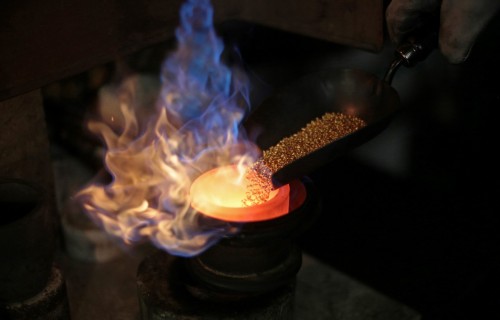 I started my career in financial journalism in January 1980. The gold price had just hit a record $850 an ounce, the rand was trading at $1.35 – no mistake – and Johannesburg was literally the City of Gold.

At the time, South Africa was the world’s largest producer of gold (over 1 000 tonnes per annum), platinum and other precious metals. We were truly the centre of the mining universe and our politicians of the time couldn’t stop reminding the outside world how important we were to them….

The JSE gold board had over 30 gold mining companies listed; and then there were the mining holding companies: the Anglos, Gencor, Rand Mines, JCI and many smaller ones.

The financial and investment community literally lived from gold-fix to gold-fix, still then relayed to the waiting world from London via telex messages, which came spattering out into the hands of the copy boys whose sole task was to tear a strip of paper with either good or bad news and run to whomever was paying his salary. And as Baron de Rothschilds* proved during the Napoleonic Wars, being first with vital information made the difference between huge profits and losses.

The Johannesburg CBD was booming. Head offices, restaurants, bars, clubs and even massage parlours were scattered in and around the precincts of the head offices of some of the most powerful mining companies in the world.

As a financial journalist one also witnessed and experienced first-hand some of the excesses, today unthinkable, which was part and parcel of a relatively small group of businessmen, financiers and miners, who were making enormous amounts of money.

One example that comes to mind was the ‘party bus’ imported by Darling & Hodges, a supplier of mining equipment to the gold and platinum industry. Another example was a well-known PR practitioner who booked out a whole massage parlour for the afternoon to entertain all the senior financial editors in the Johannesburg area. Regrettably I was the junior in the office and had to cover for the editor who went to a ‘press conference’ that lasted well into the night.

All good things come to an end

It’s my view that 1980 signaled the start of the end of Johannesburg, and hence South Africa, as being the centre of the global gold and mining universe. What followed thereafter was a long and slow decline. First came the decline in the price of gold and other precious metals, which lasted for more than 22 years before the cycle ended in 2002. Then came the mergers, consolidation and eventually the flight of miners – amongst others Anglo American – out of SA, seeking alternate listings. By the time gold had roared back to new heights in 2011 at around $1 900 per ounce, the South African gold industry, had virtually disintegrated and there was very little left to benefit.

Today, a mere generation later, our gold index consists of only four companies. The JSE index is about half of what it was 20 years and more ago. We have also dropped down the list of gold-producing countries to no. 7 and at last count we’d been overtaken by Peru of all places.

Sadly, many old-school investors held on to their belief that the gold price and hence our mining and commodity shares would arise, Lazarus-like from the grave and once-again start producing super-profits and ever-rising dividends. There are too, also sadly, some local fund managers, who also still hold this view but have seen the investment returns of the funds they manage being obliterated by the death-convulsions of an industry that does not have much longer to live, particularly our gold mining industry.

In the investment world your investment returns are not always influenced by the investments you make, but by the ones you avoid. Avoiding the gold and commodity sectors in SA over the past five years has been a very good decision.

Before I get emails about being wise after the event and commentating with hindsight, I’ve been warning about this trend for the past four years. It has been clear to me for some time that we are witnessing the end-times of our gold mining industry. This has been the result of a combination of factors including rising labour costs, frequent strikes, electricity (costs as well as certainty of supply), the uncertainty about ownership of mineral rights, affirmative action and BEE-codes. However, our mining grades have been falling in addition to sharply higher costs to get the remaining gold out of the ground.

The only people really making any money out of gold mining are the executives paying themselves obscene amounts of money for being in charge of a dying industry.

This chart should scare you

The chart below compares the Old Mutual Mining and Resources Fund returns with that of the JSE All Share index over five years. In spite of a very nice uptick of over 11% over the past month, the fund has not produced any returns for investors who have hung around for five years or so. I have merely picked the OM fund as a matter of convenience. All the other gold and commodity funds tell similar tales of woe.

This has been wealth destruction on an industrial scale. Its impact is more widely felt than in just the ups and down of quoted shares or the values of investment funds.

The full-scale effect of this waning mining industry is being felt in many areas of South Africa, including job creation, tax revenue collections, new foreign direct investments and even in the decay of former mining towns, scattered around the Witwatersrand.

As I said in the heading: it’s a chart that scares me as it should scare you. It highlights how quickly things that might appear to be of a permanent nature can change. It also scares me how little government seems able to do about it. It appears to me that there is very little long-term planning being done to consider how a replacement needs to be found for the mining industry.

This year, mainly due do the mining unrest and the prolonged strikes at our platinum mines last year, we have simply vanished off the list. Kaput!

What is particularly worrying is the very strong correlation between these rankings and future FDI. The developed world is looking better all the time but more worrying is that not one country in the Middle East and North Africa (MENA) or sub-Saharan Africa make the rankings this year.

We need FDI now more than ever, but we are not getting it, and it would be appear as if at every turn we are making life as difficult as possible for potential foreign investors to set up shop in SA.

Without meaningful FDI our relative chart (SA versus the world) could well end up looking like the chart enclosed.

Is foreign investment a remnant of our colonial past?

*  Baron Nathan Mayer de Rothschild reportedly made a fortune during the Battle of Waterloo by using messengers with homing pigeons who sent reports on the outcome of the war back to London and Frankfurt. This time advantage enabled him to buy and/or sell shares well ahead of everyone else.

**Magnus Heystek is the investment strategist at Brenthurst Wealth. He can be reached at magnus@brenthurstwealth.co.za for ideas and suggestions.

Quantitative Easing in the developed world leads to an oversupply of credit, forcing bond yields to zero. The availability of cheap financing then leads to overproduction of commodities during the same time when demand slows. This forces the yield of all primary industries to zero. It is like the head of OPEC recently stated, “The problem is not the oversupply of oil, the problem is an oversupply of credit”.
It is becoming clear that QE causes deflation. QE serves as a conduit to transfer all mining and agricultural profits to the banking system. Like Keynes said, “not one man in a million will understand this”.

This is true. I have been saying for a long time that QE causes deflation not inflation simply because the newly created US$ are recycled straight back into the bond market where risk free profits await bond speculators. This results in falling interest rates. Falling (not low) interest rates decimate industrial capital by raising the retirement value of existing debt and effectively transfer industrial capital to bond holders’ pockets (US de-industrialization anyone?). Falling interest rates are the best definition of deflation I ever heard of.

Its not about the profits but the capital.

Middle East and North America (MENA)…should that not be North Africa ?

Nobody does doom and gloom like the devil’s messenger himself, Magnus Heystek, Funny how that undertone of negativity has become a trademark of his articles, very entertaining though.

So are we on the slippery slope to a banana republic?

Many people who are anti gold choose 1980 as a starting point for their anti gold rant. Likewise 2010 is a good point to start an anti commodities rant. Start the graph at the peak and it’s downhill all the way! Likewise cherry picking starting points for regression analysis with stochastic data is equally meaningless.

“It is always darkest before the dawn”. Words of wisdom from a Canadian miner in March 2000.

However, one should not understate the role the ANC has played in the destruction of the SA mining industry, especially the gold sector. Australia has benefited enormously from the commodities boom, SA not. By raising the required return, costs, BEEE coupled with royalties, the ANC has effectively left the mining industry buried.

I agree: the SA mining industry is best left alone while Moloch and the ANC wrecking ball roam freely.

Interesting read about the past glory days of SA gold and Jhb. What would Oom Paul say now?
And yes, maybe Magnus should tell Black Business Council Sandile Zungu about SA falling off the list. He is over-optimistic about the economy in another article on Moneyweb