With smartphones, Vodacom leaves MTN in the dust In May, Vodacom announced that it had 9.3 million smartphones on its network in South Africa (as at end March, the end of its financial year). That is massive, especially considering that a year ago, the number was 7.3 million. Total smart devices on its network – which includes tablets and dongles – is 11.6 million.

By comparison, MTN had 5.9 million smartphones on its South African network as at December 31, 2014. That’s the most recently published number (it doesn’t disclose this data in its quarterly group subscriber updates). MTN is adding around 300 000 smart devices a quarter, so by March 31, likely had around 6.2 million active.

But, this still leaves Vodacom around 50% ahead.

What makes this particularly interesting is that up until the end of 2013, both Vodacom and MTN were neck-and-neck in terms of number of active smartphones on their networks. In fact, MTN caught up to Vodacom and then surpassed its larger rival in the latter half of 2013.

What happened last year is unprecedented: MTN announced in August that active smartphones as at June 30 totalled 5.3 million, a 2 million drop from six months prior. It cited a “change in definition” for this reduction. Attempts to get comment from MTN South Africa last week were unsuccessful (but then again, with tyres burning outside its 14th Avenue head office, call centres and stores shut, it surely has bigger problems to tend to).

So what could’ve led to this massive restatement?

The clue, I believe, is in the above-average growth evident in MTN’s 2012 and 2013 numbers. It’s no coincidence that the fourth quarter of 2013 marked ‘peak’ for BlackBerry in South Africa. Among the local operators, MTN was still aggressively adding BlackBerry subscribers very late in the game. Remember that, following the launch of BlackBerry 10 in 2013, legacy BlackBerry usage (the kind that became popular with all-you-can-eat internet) cratered. From that point, there were few compelling devices that still offered BIS. Plus the market moved on. You simply didn’t need a Blackberry anymore. Not with the cheap and undeniably better Android devices that began to hit stores.

So, MTN’s mystery two million ‘smartphones’ were surely legacy BlackBerry (OS 7) devices? It’s the only plausible answer. Besides, in 2015 (and 2014), it would actually be hard to argue that a three-year-old Curve which was still chugging away on the network would be classed as a ‘smartphone’.

Vodacom’s definition of a smartphone, as per its annual report, is rather generic: “a mobile phone offering advanced capabilities, including access to email and the internet” (MTN doesn’t publish a definition in its annual report). This means those legacy phones are probably stuck somewhere inside Vodacom’s 9.3 million figure, but, it has been far more aggressive in switching users away from those legacy BlackBerry devices. In fact, in late 2013, you could hardly find the promotion of one in its monthly deal sheets (compared to MTN where they’d have pride of place on page 3). I’d guesstimate that Vodacom probably has around 1 million of the old OS 7 BlackBerry devices left on its network, if that.

Many of those old BlackBerry die-hard users have ended up on Vodacom’s own low-cost Vodafone-branded devices, a strategy that’s becoming more successful over time. In the past year alone, Vodacom has sold “more than three million low-cost smart devices”. This includes the Smart Kicka (R659 cash) and Smart Tab (R1 179) which sold over 1 million since launch in the operator’s Q3 (September to December 2014). That is an incredible number.

Out of the two million total smart devices Vodacom added between March 2014 and March 2015, 1.3 million were in the last six months. This speaks to the success of its low-cost own-device strategy. (MTN, by contrast, has tried to emulate this with the ‘Steppa’, but continual stock-problems have meant that customers simply haven’t been able to get them.)

It also illustrates something else. With most of the growth coming at the low-end (effectively sub-R1 200 ($100)), the rest of the market is already fairly saturated.

Practically everyone who can afford a smartphone has one. Vodacom says 43% of the devices on its network are smart (with 15.4 million non-smart). These numbers are important, because it’s not as simple as dividing the device total by the active ‘subscribers’ total, given that active subscribers are total active SIM cards, not devices. 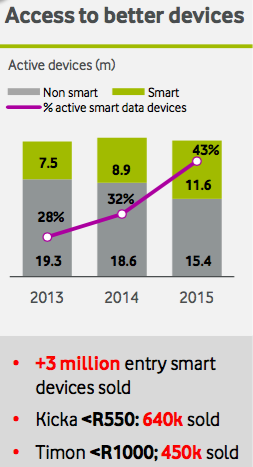 But, Vodacom’s detailed numbers back this up: 78% of postpaid users are on “integrated tariffs” (the Smart and Red price plans). You can be sure that smartphone penetration among the remaining 22% of users is high. So, nearly everyone who is on contract has a smartphone. In the (upper-) mid- to high-end of the prepaid market, the same is true.

Why all this focus on smartphones when there are 17 million active data users each on Vodacom and MTN? After all, that’s around twice as many as there are smartphones?

Not only is the market ensuring that very soon you won’t be able to buy a feature phone (they simply will no longer exist), but smartphone users use a ton more data than non-smartphone users. To operators, this is gold.

Already, Vodacom says the average amount of data used per month by its smartphone users is 342MB, growth of 38% from a year earlier.

Vodafone’s group figures are revealing. Users with iOS and Android devices in its European markets (including UK, Germany, Italy, and Spain) are now using 755MB per month on average. This is 60% more than a year ago (473MB).

That’s the gap. That’s the potential. From this point, we will double to catch up with average usage in Europe. At the upper end of the market, we already likely compare very favourably.

Aside from driving smartphone adoption, data bundles (and pricing) are the other big lever that operators have to stimulate usage. In its May reporting, Vodacom’s given us some colour on how successful it’s been. In the past year, it sold 196 million data bundles, an increase of 139% over 2014. By the beginning of this year, it was selling an average of 20 million data bundles per month! Ninety percent of all usage is now in bundle. 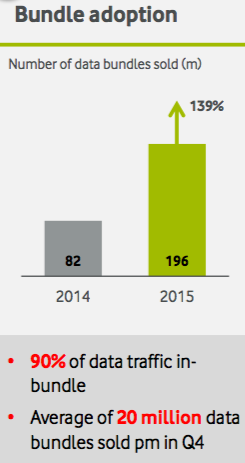 Most would argue that data pricing is not quite ‘there’ yet. Still, Vodacom says the average price per megabyte has dropped by 24.1% over the past year, after a 24.8% reduction a year prior. That means the average price users are paying for data has halved since March 2013!

Many people will balk at this statement, and that’s potentially the problem with averages. Prices have not necessarily halved at the top end. But it’s definitely become a lot cheaper and easier to buy a 60MB data bundle for R6 (or 100MB for R10) at the lower end. Anyone surprised?

The difference is not 33%

Remember that the write is describing the percentage increase.

Found a nice explanation online:
To calculate the percentage increase: First: work out the difference (increase) between the two numbers you are comparing. Then: divide the increase by the original number and multiply the answer by 100. If your answer is a negative number then this is a percentage decrease.

MTN provided a fairly opaque ‘response’ to my query…

A smartphone is a mobile phone with highly advanced features or most of the functions of a computer. The key features that define a smartphone are as follows:
· High Resolution Touch Screen
· e-mail and internet access
· Advanced Mobile Operating Systems (Android, iOS, BB)
· Runs advanced applications
· Manages business and personal information
· Integration into business and personal computing systems
· Wi Fi Connectivity and minimum 3G network capability