You can’t build wealth if you don’t master this… I took a fair amount of flack from Moneyweb readers a few weeks back in my letter to 25-year-old me. Those comments have evaporated into the ether, but the gist of many of them was: ‘How could you leave budgeting off the list?’

I didn’t omit it in the list of financial lessons I wish I’d learnt then.

I mastered this a decade ago.

I’m constantly amazed by just how many of the people I know have zero idea what actually happens in their cheque account between the 25th of the month, and a week or two later. There’s a lot of “paying” accounts and some shuffling of money between accounts and credit cards, but no real plan.

I get it. Numbers and maths aren’t easy. We’re not all accountants (I certainly am not).

But, budgeting is actually dead easy.

I’m a big fan of Carl Richards, author of the forthcoming book The One-Page Financial Plan (and previously The Behavior Gap: Simple Ways to Stop Doing Dumb Things with Money). And the reason I’m a fan is that he explains (often complex) concepts so simply. Carl’s the sketch guy. I was lucky enough to interview him 18 months ago. 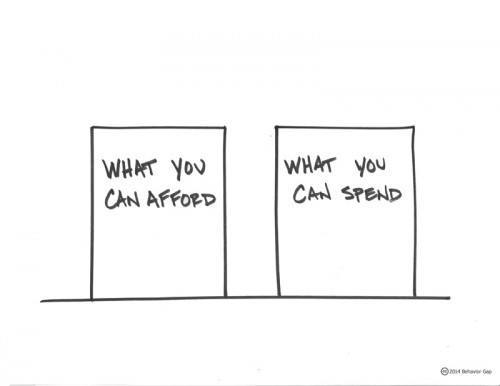 In a recent New York Times column, Richards told a story about a couple he knew in a ‘parable’ illustrating his idea for that week: What you can really afford. His sketch is (almost) laughably simple, and it’s something I’ve increasingly lived by over the past few years.

You cannot afford what you’re not able to spend. It’s precisely what I would’ve told myself at age 25: buy a house at 20% or 30% what I think I can afford. Ditto with a car (and here it’s useful to be even more ruthless with the percentages). Debt is useful, but only if you’re disciplined about it. Which is tough, because most people aren’t disciplined.

But, back to the whole budgeting thing…

Most people have a single income. You work a job. Or maybe, two jobs. That’s money in. Then there’s the mountain of expenses (money out).

(Forget rental income and interest income and dividends and all of that. If you’re worrying about any of those on a monthly basis, I’ll bet you don’t struggle with budgeting.)

Draw a line down the middle of a piece of paper and write your monthly (net) income on the left (or put it in one column in Excel).

On the other side (or in column B), start listing your expenses. Debit orders, car repayments, insurance, rent/bond repayments, bank charges, medical aid, cellphone contracts (get rid of those), school fees, etc.

Broadly speaking, there are three categories of expenses.

Non-negotiables are probably the rump of those you’ve just listed. These are fixed. You can’t exactly elect whether or not to make your Wesbank payment for the month!

Predictable expenses are relatively constant and easy to quantify. Food, for example, would fit in here (yes, technically it’s non-negotiable, but it’s going to move up and down within a range month-by-month). Fuel also fits into this category. These numbers aren’t entirely fixed, and if it’s a tough January (we all have those), you end up eating tuna mayo sandwiches towards the end of the month.

Discretionary expenses are the things we tend to waste ‘all’ of our money on. Eating out. Clothes we can’t afford. Gifts. Those times when we ‘spoil’ ourselves, you know?

Figuring out where all the money is going is important, but the next step is even more crucial. Expenses need to be cut. You’ll notice I haven’t mentioned savings anywhere. That’s because most people don’t save (and those who do, don’t save properly). A few hundred rand a month in a savings pocket is not ‘saving’.

You may think cutting the discretionary stuff is the only room you have to move, but you’re wrong. There is room to cut expenses in all three of these categories.

Your fixed expenses aren’t cast in stone. Sure, you can’t miss a car repayment, but you can trade down. Ditto with your predictable expenses. And your discretionary stuff? Ja, well. Interrogate every single expense and do so regularly (not only once a year, or when you remember to).

Beyond figuring out what you’re spending your money on and then making the necessary adjustments, the real crux of ‘budgeting’ is being utterly disciplined in your spending every month.

This is a real-time exercise. It’s not something that you sit down and ‘do’ one week into the next month.

Humour me. If you know you’ve only budgeted R500 or R1 000 (or whatever the number is) on eating out and takeaways for the month, and you suddenly have to join friends for a birthday dinner out or something, adjust. Find that extra R400 elsewhere. Do the same with clothes, food, or anything that isn’t fixed for that matter. This often catches out those people who do budget. They don’t adjust, don’t measure and look back three/four/five weeks after the fact, struggling to understand why they didn’t have any money left last month (or the month before that, or the month before that)…

I haven’t mentioned credit card debt or repayments anywhere. That’s not what a credit card is for. Some argue that credit cards are for ‘unexpected’ expenses. Um, no. The reason why this doesn’t ‘work’ is because most of us are rather ill-disciplined when it comes to the meaning of ‘unexpected’. A R1 000 pair of shoes you weren’t planning to buy but saw on Saturday is not unexpected.

In an ideal world, you should use a credit card as if it were a debit card, and settle it in full at the end of every month (or, better yet, pre-fund it). Credit cards earn you far better points on loyalty schemes and cost you nothing to swipe in stores (the merchant pays all the fees). They’re also a necessity when booking overseas flights, given the free bundled travel insurance on many of them.

Finally, once you’ve cut back everywhere you can (spending what you can afford), you should end up with a decent chunk of money to save. In theory, you’re taught to put aside x% of your income and save it. We all know that in reality that seldom happens. Tackling this from the other angle has worked for me.

And then (again) it’s all about being disciplined. You’ll honestly be surprised at how much you’re able to save. At this point, where you save is secondary. That you save is primary.

The choice is almost entirely binary:

Don’t save and you’ll always be in debt, juggling one bit of credit for the next.

Or, be completely ruthless about what you’re spending where and when, which means money to save. And then you’ve got a very real chance of creating actual wealth.

You right it is common sense, some thing surely lacking in a lot of CFPs that I know of. A lot has been mentioned in previous articles re: saving/investing. This is a good summary/reminder to those that don’t.

I agree most people probably need an actual budget. Always paying off my credit in full and knowing how much I need for that has always given me a good handle on my expenses. I’ll also happily cut the savings one month and put in more the next month if something requires that.

One important thing is to set up a monthly debit order into some form of savings or investment, this is almost like paying tax it comes off your nett income before any discretionary spending. Monitoring spending is vital too especially on things like clothing and entertainment. You may be horrified to find how much you are spending on coffee shops and dining out. record on a basic spread sheet From slips. In any event one should record all card purchases for reconciliation at month end, especially the credit card account. Boring but very useful, and quick if done daily or weekly.

Once you have saved money you also need to invest it somewhere with decent enough returns to beat inflation, otherwise it wont help. Something like on EasyStockPicker.co.za

Although one can pay later and save even more, it is very effective to use a credit card as a debit card only.
Certainly save plenty on bank charges.