Here’s how bad things are for newspapers

The announcement that Naspers would unbundle its printing operations Novus and list them separately on the JSE got me thinking. How long until Media24 meets the same fate?

In the 2014 financial year, Media 24’s printing business reported revenue of R3.9 billion and an operating profit of R649 million. But the entire Media24 group reported operating profit of R593 million, on revenue of R8.1 billion. That surely means the newspaper, magazine, books and digital businesses lost money in the last financial year (around R50 million, give or take)?

It’s telling that the printing assets are to be unbundled separately, versus the whole of Media24. One might assume that the media content businesses will be retained, at least in the short to medium term.

(And Blackstar has, four various reasons, decided to make sure Times Media is able to ride out the next few years of an industry in turmoil in private.)

That’s the detail, but what about the backdrop?

This is (finally) something I’m academically qualified to write about.

Circulation is cratering. If you look closely at core circulation (which excludes all the strange, highly-engineered methods being employed by many newspaper groups in the country to prop up the numbers), the data is even scarier.

The entire forest’s worth of newsprint lying at the country’s major airports in the mornings is (mostly) not part of these numbers. That strategy is designed to simply ensure somebody – anybody – reads the paper (and sees the ads).

The total circulation of the ten largest daily newspapers in South Africa has dropped 29% in the last five years (from Q1 2010 to Q4 2014), according to official ABC data. This is not about claimed ‘readership’ on sample groups of questionable size. These are real, paid-for sales. 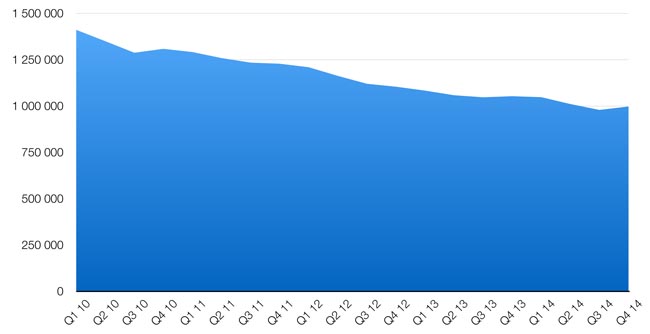 And that number looks better than it should because of the hybrid model followed by The Times (bundled with a Sunday Times subscription along with some single copy sales). Remove The Times from the equation and the total circulation of the largest daily papers (using Business Day in tenth spot) has fallen by exactly a third since the start of 2010.

Dig into the individual papers, and the numbers are close on apocalyptic. Daily Sun has seen circulation plummet by 44% since the first quarter of 2010, while Beeld’s and The Star’s drops have been similar (43% and 42%, respectively). In Daily Sun’s world, circulation has cratered from 485 000 to just over 273 000 in five years. The Cape Times is down 33%, although after the turbulence at the paper over the past six months, who knows where the numbers might end up.

The ‘bright’ spots are isiZulu daily Isolezwe, which grew 2.5% over the past five years, and The Times which has managed 16% growth on the back of what one can only assume is a strong retention rate of Sunday Times subscribers. But even Isolezwe has hit a ceiling, if the numbers over the last two or three years are to go by. It’s firmly stuck in a range between 100 000 and 120 000 copies a day.

Sure, there is seasonality in the numbers, but Q4 2010 vs Q4 2014 does not look significantly better, especially since the time period shortens to four years. Total circulation for the top ten dailies is down 24% over 48 months (exclude The Times and the number is 27%). It’s hard to judge whether the rate of decline is accelerating or not. As a whole, the declines seem to be moderating for the ten largest papers. But again, it’s all in the detail. Through 2014, for example, Beeld’s year-on-year drop for each of the quarters was 7%, 7%, 8% and 19%. Its total circulation is now below that of stable-mate Die Burger, surely for the first time in many, many decades (if not ever)?

One thing you can bank on: ad rates increase every year, meaning the cost to reach a reader in 2015 is significantly higher than it was five years ago. Think above-inflation increases coupled with a similar percentage drop in circulation every year….

Yes, we “get our news from the internet, apps and Twitter now”, I can hear the Moneyweb commentariat yawning. That’s pretty much a given in 2015. (I don’t know a single person who buys a daily newspaper these days. Four or five years ago, I might’ve known one, two at a stretch.)

What’s hard to fathom is why the major media groups in South African have simply failed to react in any aggressive manner whatsoever to what was obviously visible from what’s happened and happening in every other developed world market. Isn’t it an indictment that local publishers have only managed to build a handful of profitable online businesses of scale?

A newspaper extinction timeline created by ‘futurist’ Ross Dawson received a lot of attention when it was published in 2010. Some in the business (then) pointed to it as some sort of validation… ‘See, we have another 20 years to go, at least!’

Based on the circulation trends and from what I know is happening in the newsrooms at the major print media groups in the country, I can easily see a handful of those ten largest papers disappearing altogether by 2020. That’s only five years away.

See, soon the numbers simply won’t add up. Desperately trying to prop up 100 000 circulation using every trick in the book becomes expensive.

A heavily overtraded major market like Johannesburg just cannot sustain nine daily papers (if you count Isolezwe and include The New Age). Expect closures or ‘mergers’ (quite what Pretoria News is still doing as a stand-alone paper is anyone’s guess). Soon, you’ll see the number of titles in large markets like Cape Town and Durban ‘consolidate’ down to one. Those papers in the more regional markets will battle on a little longer.

Imagine running a business with a finite lifespan (worse still, imagine owning one)!

And as for soon-to-be-spun-out Novus (and Caxton), whose primary customer base is print media, how exactly does this play out?

Next up, the weekly and weekend papers.

And there, the picture’s not much better…

* Hilton Tarrant works at immedia. While working at Moneyweb, he was effectively seconded to a Caxton digital project for two years.

** Moneyweb is majority owned by Caxton.