Impact of fuel prices in SA

How SA’s fuel price is determined, expectations for the future and how higher fuel prices impact your investments.
By Renzi Thirumalai 8 May 2022  10:18 South Africa’s fuel prices increased again for diesel inland, between 88c/l and 94c/l for diesel at the coast, while the price of petrol decreased by 12 cents a litre on 04 May 2022.

The latest fuel price announcement is based on the shortage of diesel supply due to lower exports from Russia as major exporter of distillate fuel. This is despite an intervention by National Treasury to reduce the cost of fuel by cutting the general fuel levy (GFL) by more than R1 per litre. While this would have brought relief there is little government can do beyond cutting the GFL.

The rand’s recent strength against the dollar has prevented further price increases. Geopolitical tensions and looming oil sanctions against Russia have resulted in expectations of a decrease in the future supply of oil, and the price of Brent Crude Oil has increased as a result. The correlation between Brent Crude and the South African fuel price can be seen in the graph below: 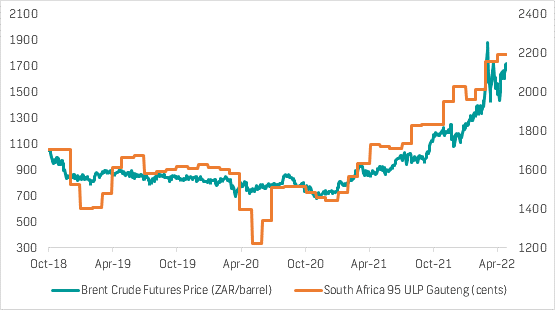 How fuel prices are calculated

The fuel price in South Africa is comprised of four main elements:

The impact of higher fuel prices on consumers

Expectations for the Brent crude oil price and petrol prices The impact of higher fuel prices on your investments

Higher oil prices will also benefit companies exposed to these prices directly, such as Sasol or even companies with exposure to fuel retail such as Kaap Agri.

There are international options available too with many exciting companies available to invest in in the energy supply chain. One company we particularly like currently is Schlumberger which provides technology and services to the energy industry for reservoir characterisation, drilling, production, and processing.

Looking towards replacement technologies is also an interesting option. Here we like Enphase Energy – a US-based energy technology company that develops and sells software-driven home energy solutions. Equity exposure remains investors best bet against inflation on a relative basis; but as explained, this will vary greatly by sector and even at a stock level.