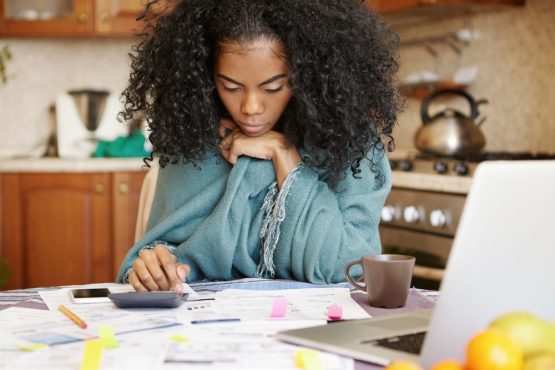 Millennials have few of the advantages their parents had. The big costs of living — education, housing and health care — were more affordable when baby boomers came up, allowing them to save more money for retirement. Markets were also poised to give their savings a boost. When boomers entered their peak earning years in the late 1970s and early 1980s, US bond yields were among the highest on record and stock valuations were among the lowest.

How things have changed. Millennials are drowning in student debt. They struggle to afford homes, particularly in big cities, and rent eats a growing chunk of their income. They pay more for health care every year, if they can even afford it. And unlike their parents, investing in the US isn’t likely to help much. In a total reversal of the boomers’ good fortune, US bond yields are now among the lowest on record and stock valuations are among the highest.

But millennials have an edge that their parents did not: They can park their money outside the US. Until relatively recently, US investors had limited opportunities to invest overseas. Now they can shop the world for the best values.

And it’s a good time to poke around global stock markets. A commonly used gauge of future stock returns is the earnings yield, or the inverse of the ubiquitous price-to-earnings ratio — and for good reason. Over the last 150 years, there’s been a positive correlation between earnings yields, based on a 10-year trailing average of earnings, and subsequent 10-year returns from US stocks (0.37). (A correlation of 1 implies that two variables move perfectly in the same direction, whereas a correlation of negative 1 implies that two variables move perfectly in the opposite direction.) In other words, higher earnings yields tend to augur higher returns over a reasonably long period, and vice versa. Not always, but much of the time.

By that measure, foreign stocks look more promising than those in the US The S&P 500 Index offers an earnings yield of 3.7%. That’s nearly half the yield of 6.4% for the MSCI World ex-USA Index, a collection of stocks in developed markets outside the US, and a fraction of the 8.4% yield for the MSCI Emerging Markets Index. 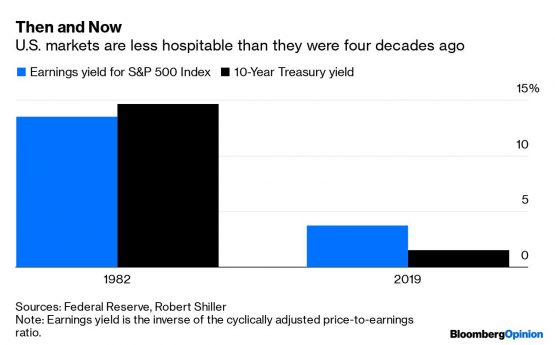 Investors willing to look beyond broad market indexes can find even better values because there’s a wide variation in global yields, as the table below shows. For example, of the largest stock markets in the World ex-USA index by market value, Japan’s earnings yield of 4.2% is the lowest and Hong Kong’s yield of 8.2% is the highest. And among the largest markets in the developing world, India’s yield of 3.5% is even lower than that of the US, while Russia’s is a whopping 10.3%. Even so, it’s hard to find a foreign market offering as little value as the US. Of course, there are obvious reasons why so many foreign markets are on sale. The world is awash with worries. The UK is wrestling with Brexit, China is facing a prolonged standoff with the US, Germany appears to be slipping into recession and Russia is bruised by a slumping energy sector. Many fear the world is entering a period of deglobalisation that will disproportionately affect smaller and trade-dependent countries. Against that backdrop, the US seems like a haven to many investors.

Little of that is new. I pointed out the divergence between the US and foreign markets in May 2016, and investors’ devotion to the US has only intensified since then. The S&P 500 has outpaced the EM index by 4.4 percentage points a year through August, and the World ex-USA index by 7.2 percentage points, including dividends. Still, it’s a mistake to assume that the US will sustain its popularity forever. Anything can happen in the near term — yes, three years is a mere moment in markets — but millennials have the luxury of time. As unlikely as it may seem now, the world’s biggest economies will prosper again, and when they do, their stock markets will disappear from the bargain rack.

If you have any doubt, hark back to the years leading up to the 2008 financial crisis. In those days, investors were less enamoured with the US than the rest of the world. The earnings yield for the S&P 500 was 3.8% in late 2007, compared with 3.5% for the World ex-USA index and 3% for the EM index. Financial history is replete with investors’ wavering sentiments.

None of this means that millennials should abandon the US entirely, but if they’re like their parents, their portfolios have little exposure to the rest of the world. This is a good time to venture out.

This column does not necessarily reflect the opinion of the editorial board or Bloomberg and its owners.

Exactly the same can be said for South African millenials…take your money offshore!

South African Millenials don’t even have jobs What money are you talking about, we’re all broke!

This would apply to all SA citizens when (not if) prescribed assets come into effect. “Investing” in our SOEs would be a bit of a stretch of the concept of investing.