Naspers is listing about a quarter of the new firm, known as NewCo for now, and retaining the rest. Picture: Bloomberg

Europe wanted a consumer technology giant to rival Silicon Valley. It’s getting one – along with California-style disregard for public investors.

When Naspers lists its technology investing unit in Amsterdam next month, the new company will have a market capitalisation that’s likely to top $100 billion, a valuation derived entirely from its 31% stake in Tencent. The parent trades at a discount to the value of its holding in the Chinese web giant.

But Naspers will also bring with it a dual shareholding structure to match or even exceed the worst practices of tech behemoths such as Facebook or Google parent Alphabet Inc.

It’s a holdover of Naspers’s current set-up, where the two classes of stock give the chairman and his cohort extra voting rights. Its rationale lies in the Johannesburg-based company’s origins as an Afrikaans newspaper owner. Like The New York Times Co., which has a similar structure, the arrangement is supposed to ensure editorial independence by preventing malign influences from building up a stake and trying to dictate editorial policy. But it also makes it more difficult for shareholders to hold management to account. 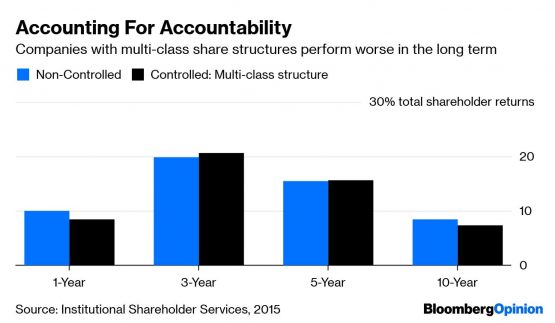 However much sense that makes for journalists, it’s hard to see how the safeguards are needed for investors in food delivery and e-commerce startups, which is where the new company is directing its funds. Even the argument that a guarantee of independence is required for its stake in Russian social media and messaging platform Mail.Ru seems thin.

Naspers is adamant that a multiplicity of shareholders are represented in the two main holding companies that control the firm, and that their main objective is to preserve its independence.

Naspers is listing about a quarter of the new firm, known as NewCo for now, and retaining the rest. While an exchange-traded “N Class” share in NewCo will confer one vote on its owner, the holders of the unlisted “A Class” stock will have 1 000 votes, just as they currently do in Johannesburg, should Naspers’s voting interest in the NewCo drop below 50%.

Dual classes of shares aren’t uncommon, but seldom on this sort of scale. Volkswagen, Ericsson AB, Altice Europe are among European firms with dual structures, but the voting ratios are generally much lower. And they are the exception, not the rule. At Facebook, Mark Zuckerberg and his co-founders have “Class B” shares, which enjoy 10 times as many votes as the “Class A” shares that are publicly traded.

That arrangement has provoked dissatisfaction enough as the social network’s shareholders have been helpless in the face of management missteps over data and privacy. But it looks almost progressive compared to Naspers, where the voting concentration is 100 times greater. The situation at the Johannesburg-based company is exacerbated by the opacity of the ownership structure.

The supervoting shares reside in a series of holding companies. In a legal dispute two years ago, rival media firm Caxton alleged that those holding companies were in turn controlled by Naspers Chairman Koos Bekker and other veterans of the firm, including non-executive director Cobus Stofberg. Irrespective of who ultimately calls the shots, the point is that we don’t quite know. It’s thoroughly unsatisfactory.

What’s more, the Silicon Valley firms are controlled by their founders, who are supposed to have a singular corporate vision. While Bekker and his colleagues helped transform Naspers, the firm dates back to 1915. Bekker did not found it. Why he merits more votes is therefore unclear.

Who has the power to affect this? Without outside pressure, the A Class shareholders have little incentive to sacrifice control. Investors can complain until they’re blue in the face, but if they want to get a piece of Tencent’s growth, they know they have to stomach the huge imbalance.

Two groups have the ability to push back: the stock exchanges and the index creators. In Hong Kong, for instance, the exchange limits supervoting shares to 10 times the votes of normal stock, and makes it harder for holders to wield their additional power after they leave the company.

But Euronext, which owns the Amsterdam stock exchange, would risk losing the lucrative Naspers listing to a rival if it sought to impose similar strictures – stock offerings generated about 8.6% of its 2018 revenue. It would also forego the distinction of having such a prominent firm on its exchange. In the context, you can see why Euronext is being so spineless.

The more achievable approach would be for index operators to exclude firms with dual structures, since no exchange seems likely to push back. S&P Global has taken that route, which is why Snap Inc., which confers no voting rights whatsoever on ordinary shareholders, isn’t a constituent of the S&P 500. But it hasn’t imposed the same rules on those existing listings with dual stocks.

Naspers’s European listing is partly intended to attract index investors – it expects to be newly eligible for nine indices. If the operators of those groupings were to stipulate that the shareholding structure is an obstacle to joining, it would be a positive step.

And it will be difficult to persuade startups planning to list in Europe to adopt a structure which represents all shareholders equally when what could be the region’s biggest tech firm doesn’t. It would risk making poor shareholder representation de rigueur in Europe, and it’s harder to put toothpaste back in the tube than to stop it escaping to begin with. Exchanges and indices have an opportunity to lay down a marker, and they should.

Holders of VW preferred shares have no voting rights. But the carmaker has also suffered its fair share of management missteps partly due to a lack of accountability.

I have been a shareholder for about 15 years. I have had no reason to feel that management needed to be held to account nor do I currently see any reason to do so. All management has done for me as shareholder is make money hand over fist. I suspect that if management were constrained in the way some people want, I would today be considerably poorer. Viva Oom Koos! Viva!

Lucky shareholding period, emphasis on sheer luck for KB and many shareholders. Somewhere in this companies future actual performance is going to be required, that is the point of frustration for a new shareholder who has not had the run of luck.

If the New York Times has this structure of preferred shares, why not list Newco on the NYSE where it is allowed? Bekker and Stofberg always tries to control the narrative around unhappy shareholders. This move will give them personal clout over the business in their own private bombshelter of Amsterdam (where Bekker is resident). They won’t ever mention that Naspers is ALREADY listed on the NYSE and LSE via depository receipts (secondary listing). And as the writer asserts, they maintain 75% voting rights through Naspers. As they fade into the darkness, you will only hear their Cheshire Cat laugh.

The Cheshire cat smiles my friend, you will see him smile 🙂