What does it all mean… junk status? How is the economic fate of our country decided by three rating agencies and whether or not they’ll decide to throw us into the landfill? Is there life after junk status?

Pikitup workers are doing their bit to avoid junk status by embarking on another strike, hoping that if we don’t pick up with rubbish we can negate a downgrade to junk. Unfortunately that won’t work fellas, but we appreciate the efforts.

Moody’s, Standard & Poor’s (S&P) and Fitch are the rating agencies who place a rating on each country’s credit rating. In simple terms, how risky is it to invest in that country? More specifically, it refers to the riskiness around that country’s debt. But why debt in particular, you might ask? Well South Africa is forced to take out debt with the rest of the world to foot our budget deficit – similar to how we would go to the bank to request a loan.

Let’s break down why we have a budget deficit. Every year the Minister of Finance prepares a budget for the country. He or she allocates money to each facet of the country, which requires funding. These include items such as healthcare, infrastructure development, education and so on. The funding for all of this expenditure is supplemented by the money that Sars collects in the form of taxes. Most years, however, the amount collected from Sars is just not enough and so the government needs to go out to the rest of the world to raise more funds. This is a budget deficit.

The South African government raises these additional funds by issuing government bonds. To get people to buy these bonds, we have to pay interest on the bond. That interest is determined by the credit spread in the market, which is where the rating agencies come in. If the rating agencies rate our debt as risky, we would need to pay a lot more interest on that bond to attract investors. The illustration below explains the process in a simplified manner. 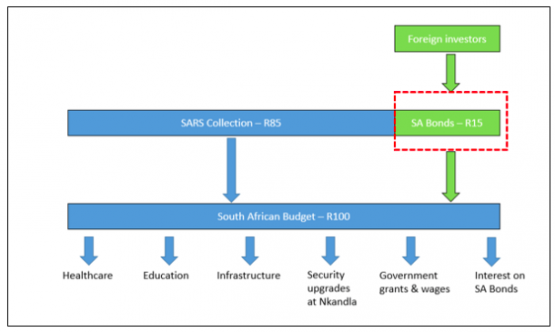 So what’s the big deal then? The first problem is that the South African economy is slowing with some expecting it to head towards recession. Current growth forecasts are estimated under 1%. Think of all the lay-offs we’ve had in the mining sector alone. When less income is generated by companies and ordinary South Africans, a smaller amount of tax is collected. A decision has to be made then as to whether we go out to borrow more money to foot the budget deficit or do we cut the budget spending? This time however, with a credit downgrade, we would need to spend more money on just paying interest and less on important items such as healthcare and education. As you can see it is a vicious cycle. The way to avoid this is to cut spending and focus on growing the economy, that way we are less dependent on debt and we are more self-sufficient. Easier said than done. I recently saw articles of Mr Ramaphosa and Mr Gordhan taking domestic flights around the country in economy class. This might be a step in the right direction but far from the type of cost cutting that we need to see from government.

Another important point is that foreign investors have mandates, most of which prohibit the investment in countries with a junk status credit rating. Once that happens you can bet that we’ll have a bit of a run on the stock market and the currency market as people exit with haste.

Brazil has been downgraded to junk status recently. I thought it might be worth considering some unwanted similarities we have with Brazil, which has led to its downgrade:

It seems as we are slowly meandering towards junk status. With rising unemployment, slow growth and potentially diminishing tax revenue…it might be time to hedge those ZARs.

This article was originally published on JoPro Blog. To view the original, please click here.

thanks for the piece.

It worries me a bit that there are an increasing number of pieces out there which suggest that we will shake off the impact of a downgrade. I think the thinking is that SA is currently increasing its domestic bond issuances and decreasing its offshore issuances.

it seems to me that everyone is forgetting that the downgrade will also impact all entities which themselves are rated – ie the corporate bond issuers – the parastatals like ESKOM and Transnet, the banks like Standard RMB and ABSA and then the major corporates. The rating methodology prescribes that a company cannot be rated higher than the country within which it operates. A downgrade of SA therefore necessitates a downgrade of every SA based company to junk.

or am I missing something ??

no you are spot on. also what is going to transpire is that there will be an outflow of capital until govt stops it (when you are junk this is what happens). thus the richer will get fewer and richers – BUT the poor will get poorer and there will be more of them – many more. that’s all very will but my BIGGEST concern is that the already unstable situation in sa will be tipped “over the brink” – and heaven knows what that will mean

The Nightwatchman 6 years ago

Thanks for reading bertie buzzkill.

I agree with you that there seems to be articles out there which say that moving to junk status wont be as bad as we anticipate, the knock on effects will be disastrous. In terms of the mandate to allow companies to have a better credit rating than the country itself, I am not 100% sure on that, I will do some research.

My expectation though is to protect against rising inflation, forex and credit spreads, we could see a notable increase in the repo rate which would push many debt ridden South Africans into an out of control debt trap. We are already shedding jobs and we could see a huge economic event should we be pushed to junk status. As for parastatals and corporates, they will be hardest hit. Imagine what this will do to an already debt strapped ESKOM as an example. Then think about what it will do to each business and individual that relies on them?

I’d like to be optimistic and think that government will do everything they can to prevent this. If we fail though, I am not optimistic that it will be a non-event.

THE AMERICANS ARE STEALING JOBS

….I see you arrived to this financial website accidentally.

In your internet address bar paste this… disney.com and have a happy day.

no the Zuptas are destroying jobs!

I think the economic fate of our country was decided by ” ourselves “, more specific the ANC government. We can’t blame anyone else for it.
Junk status means exactly that…gemors. Just drive trough our land and you will see the ” gemors ” the tangible and the non-tangible!