Whether one likes it or not, inflation is going to remain highly topical for the remainder of the year and probably also well into 2022.

In recent months, currency volatility and higher interest rates (or the threat of tighter monetary policy) have invariably been associated with bouts of risk-off sentiment among global fund managers.

Higher inflation has been the root cause of more attractive bond yields, albeit only marginal, in most of Europe, and the rise in the oil price suggests that price instability is becoming a key economic policy concern.

Read: Targeting higher inflation is the new panic in town 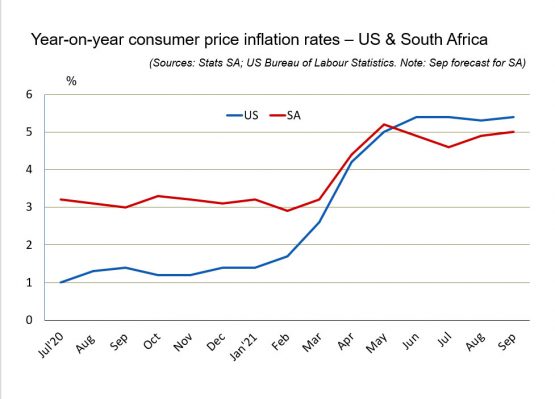 Ever since the economic malaise caused by the phenomenon of stagflation during the early 1970s, substantial scholarly research has been conducted on the relationship between inflation and GDP growth.

Although consensus seems to exist over the negative correlation between high inflation and economic growth (with varying time lags), no clarity exists on what constitutes ‘high’ inflation.

In a post-industrial economy, driven mainly by the services sectors and state-of-the-art technological innovation, an inflation rate of above 3% could be regarded as excessive, but in an emerging market that is still battling to establish a critical mass of infrastructure and integrated private sector supply-chains, an inflation rate of between 5% and 7% could be regarded as a so-called ‘threshold’ rate.

The latter term has been the subject of research by Mishchenko et al published in Banks and Bank Systems, Volume 13. In attempting to find a compromise for monetary policy, specifically inflation targeting, the team of researchers from the Ukraine and the Russian Federation analysed the relationship between inflation and GDP growth, utilising International Monetary Fund (IMF) data on 158 countries.

Read: Inflation impact may be worse than the figures suggest

Deflation is worse than inflation

Key to this ground-breaking research was the determination of the threshold of inflation (defined as the excess of which has a negative impact on economic growth).

It was established that for the period 2010-2017, 6% inflation was the global threshold (or marginal) value of the inflation rate, beyond which the economic growth rate declined or slowed down.

A more recent article by Greg Petro, a contributor to Forbes, sheds some pragmatic light on the issue of inflation, by pointing out the negative effects on the retail sector (until recently) of a decade-long period of constrained price flexibility.

Higher inflation in the US is occurring at a time when the world’s largest economy is growing at a rapid pace, possibly even outpacing its biggest rival – China – during the second half of the year. Consumers in the US are also flush with cash and employers are hiring people at a rate of knots.

Although not all of these trends are present in South Africa, the country shares the universal post-pandemic phenomenon of pent-up demand, which will start to breathe new life into those industries that suffered the most from lockdown regulations, particularly hospitality and tourism.

Furthermore, the pandemic has thinned out the competition in the retail sector, which is the pulse of the global economy. According to a report by the United Nations Conference on Trade and Development (Unctad), published in May, global e-commerce sales alone amounted to $26.7 trillion in 2019, representing more than 30% of global GDP.

Depending on the extent, duration and nature of the current upward trend for price levels, it should not constitute any serious threat to the post-pandemic economic recovery.

Rising prices often serve to catalyse consumers into spending sooner rather than anticipating that goods will become cheaper.

Little doubt exists over the short- to medium-term nature of the current upward trend in price levels, as these have been mainly caused by supply-chain disruptions flowing from the uneven global pattern of lockdown restrictions.

Progress with mass vaccinations and the general trend for an easing of restrictions will eventually also lead to an easing of constraints on manufacturing industries and international shipping.

Financial stocks usually count as a group that benefits from inflation, once it leads to a higher interest rate environment. The same holds for energy stocks, when higher inflation is caused, in part, by higher oil and gas prices.

For now, the message to central banks in emerging markets should be clear – do not overreact by raising interest rates when demand is still in the process of recovering.

Inflation destroys the value of money as well as the value of debt. Inflation is always a monetary issue. Inflation cannot exist without money. Who owns the monopoly on the issuance of money? The answer to that question also creates inflation.

This mechanism transfers purchasing power from savers to borrowers. Who is the largest borrower by far? The government of course! Who is in control of the interest rate? The government of course! Is there an incentive for governments to suppress interest rates while letting inflation rise? Well, at 280% of GDP, sovereign debt levels are at record highs and impossible to repay. So. yes, there are huge incentives for governments to engineer negative real yields on their bonds. How will they be able to do this? They will use the purchasing power of the currency to suppress the natural yield on government bonds while they tell the public that inflation is “low, under control, transitory and necessary.”

Financial repression is one most politically acceptable form of government default because nobody understands it. They keep on voting for the party that steals from them, much like ANC voters.

This implies that modern democracy is a system where people elect a government that transfers purchasing power from savers to borrowers, through the Reserve Bank and the banking system, while most voters are also savers through their pension funds.

They force us to become borrowers in order to protect the purchasing power of our savings. Banks will only lend to creditworthy clients. This is how asset inflation creates inequality in society.

“The state is that great fiction by which everyone tries to live at the expense of everyone else.” ― Frederic Bastiat

Any government in a democracy that tries to fix these problems will not survive the next election. The tools and options are becoming quite limited.

The syndrome of inflation targeting with the tool of imposed interest rates is so klunk klonk that all people should be very afraid of how these self-appointed guru fakes can agree to obey to press a button and destroy humanity. Is this con trick really the best that we can come up with to defend ourselves from the ambitions of evil ultra-money-power?

“Well, at 280% of GDP, sovereign debt levels are at record highs and impossible to repay.”
Where did you get this number from ?
I believe SA’s total state debt without SOEs is more like 70-75%, with SOE debts included it could be close to 100% of annual GDP. It shouldn’t be above 60%.
Yearly deficits are already for years above the desirable 3% of GDP. Presently around 7%, I believe.

Yes the lower the interest rates are the bigger the size of the debt bubble per country.

Probably part of the reason some governments are totally anti crypto.

Some experts are saying they also try to manipulate the gold price in order to block competition to fiat currency. The bubbles in each country need to be inflated to the same level but some countries are opting out of this system.

In SA the Reserve Bank thinks its there to manipulate the currency.

When all the idiots get it wrong and you see disaster around the corner when the oil price runs away they are all in the same boat trying to fix it with the currency.

TSK!! Leave it for the carry traders.

I’m not seeing deflation, but a ever increasing inflation.

What a nonsensical article, no one person has insight into the potential s…t storm that could precipitate a hike in inflation, China’s problems are many and diverse, supply chain management all over the world and particularly in the US are dire and getting worse, add to the existing supply chain crises any slow down of exported Chinese goods and the situation will only get worse. We cannot say with absolute certainty when COVID will be brought under a semblance of control, we just do not know. The energy crises whether you like it or not is going to be a prime driver of exist prices. I think we could very well see higher inflation for at least the next 2 to 3 years and that will impact on bank rates, wages etc. The Crystal Ball on this one is opaque at a minumum.

This is a tragically misinformed article.

“Deflation is worse than inflation” – never, at least not for the man on the street.

“Financial stocks usually count as a group that benefits from inflation, once it leads to a higher interest rate environment. The same holds for energy stocks, when higher inflation is caused, in part, by higher oil and gas prices.” – Yes. But what does this help when such a large portion of the populace don’t own equities? This is classic cantillon effect. Disastrous for the middle and lower classes.

Pent-up demand + supply chain disruptions = Higher prices/Inflation, duh! Will it be temporary/transitory? Not likely because of cheap money. Under normal market conditions, inflation is a sign of a healthy economy where demand > supply = growth and where interest rates are used to control inflation, but today we experience abnormal market conditions, characterized by crazy government and public debt levels. Central banks globally are praying that inflation doesn’t get out of control. Why? Raising rates will crash the financial markets (excessive debt = defaults). Don’t raise rates and risk hyper inflation, as well as creating massive asset bubbles (stocks, cryptos, housing), which will correct at some point, and it will be nasty!
The global financial markets are therefore a ticking time bomb and while there is still upside over the short term, it will not end well!