Inside Bernanke Inc: The lucrative life of former Fed chairman

A hot new act is playing in Vegas: a post-Fed one-man-show that’s worth millions annually on the open market.
By Katherine Burton and Christopher Condon, Bloomberg 6 May 2015  23:29 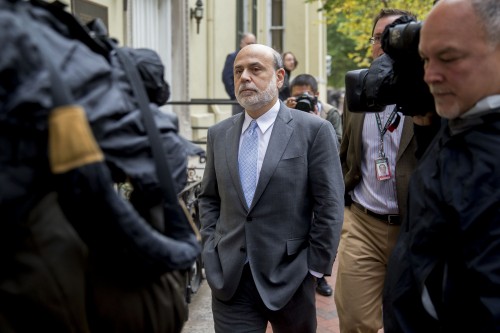 Between Boyz II Men at The Mirage and Celine Dion at Caesars Palace, a hot new act is playing Vegas: Ben Bernanke.

One day only, live from Sin City — the economist formerly known as chairman of the Federal Reserve.

Fifteen months after leaving the Fed and its trappings of mystery and power, Bernanke, 61, is settling into the peripatetic and highly lucrative life of a Washington former.

Beyond the dancing fountains of the Bellagio, in the gilded splendor of the Grand Ballroom, Bernankewill play to a full house at the SkyBridge Alternatives Conference on Wednesday: 1,800 hedge fund types who used to hang on his every word. Bernanke is, in a sense, one of them now — a well-paid investment consultant who can fete clients, open doors and add a gloss of Fed luster to conferences and meetings.

Call it Bernanke Inc., a post-Fed one-man-show that’s worth millions annually on the open market. While the former chairman hasn’t disclosed his fees and compensation — nor, as a private citizen, is he required to — he is almost certainly pulling down many times what he did while in government.

First there are speaking fees, which bring in at least $200,000 per engagement, according to a person who hired Bernanke. Then there are new advisory roles at Pacific Investment Management Co., the big bond house; and Citadel, one of the world’s largest hedge funds. Executive recruiters say each is probably worth more than $1 million a year.

Finally, there’s a book deal, details of which haven’t been made public. Bernanke’s predecessor, Alan Greenspan, reportedly landed an $8.5 million contract for his memoir in 2006. Bernanke — who has a day job as a distinguished fellow in residence at the Brookings Institution — used the same Washington lawyer, Robert Barnett, to negotiate his deal.

Policy makers like Bernanke are often criticized for going to work for the financial industry, but they are following a well-worn path. Robert Rubin, Lawrence Summers, Timothy Geithner: countless economic policy makers, in the U.S. and elsewhere, have spun through the revolving door, sometimes more than once. Summers — who picked up work at the hedge fund D.E. Shaw & Co. — is scheduled to address the SALT conference this week as well. So are former Secretary of State Condoleezza Rice and former Defense Secretary Chuck Hagel.

What does someone like Bernanke bring to a Pimco or a Citadel? Both say investment insight and some face time with clients. Many in the industry, however, tend to view such appointments as little more than high-paid marketing jobs. True, it never hurts to have a former Fed chief consulting about the economy or interest rates. But clients also love a little brush with greatness.

William Daley, the former chief of staff for President Barack Obama, is no stranger to crossing over from the public to the private sector. Daley, a former JPMorgan Chase & Co. executive who’s now managing partner of hedge fund Argentiere Capital, said that its “healthy” for government officials to take up jobs in the private sector so that both sides can understand how the other functions.

Investment staff at Citadel and Pimco also see Bernanke as more than a tool to woo pension funds and sovereign wealth funds.

One Pimco portfolio manager said he was looking forward to hearing from Bernanke at quarterly strategy meetings. (Greenspan advised Pimco too for a time.) Kenneth Griffin, who runs Citadel, was eager to bring Bernanke on board because of the former Fed chief’s front row seat to the financial crisis, when Citadel’s biggest hedge fund lost more than half its assets, according to a person who spoke to Griffin.

“He wouldn’t lend his name and reputation and time unless it was for a meaningful compensation,” said Hank Higdon, chairman of Higdon Partners, a New York-based executive recruiter for financial firms. “I would be disappointed if he did the consulting for less than $1 million -– that would show no understanding of the economics of Wall Street.”

While Bernanke is a full-time fellow at Brookings, he’s also been busy on the conference circuit. He’s spoken everywhere from Abu Dhabi to Johannesburg to Denver.

It’s the first opportunity for Bernanke to make a Master- of-the-Universe salary, having spent his entire life in either government or academia (in 2012, his assets were between $1.1 million and $2.3 million, according to government disclosures).

His timing to cash in couldn’t be better. His new jobs start as the Federal Reserve prepares to raise rates for the first time since 2006 and investors around the world are looking for any hint as to when the central bank might finally make its move. A person close to Bernanke said he would do no lobbying and have no contact with any government agencies on behalf of either firm.

He follows a long line of presidents, prime ministers, treasury secretaries and Fed officials who have all cashed in after years in highly influential, yet relatively low-paying, jobs.

Gerald Ford was the first former president to speak for a fee, collecting $25,000 per talk. No president has done better than Bill Clinton, who reaped $106 million for 544 speeches from February 2001 to January 2013, according to his wife’s financial disclosure forms.

Former British Prime Minister Tony Blair has been an adviser to JPMorgan Chase & Co. and Zurich Financial Services and made speeches, including one in Manila for Philippine Long Distance Telephone Co. that paid him $9,000 a minute.

Nicholas Colas, chief market strategist at Convergex Group, a brokerage firm based in New York, said Bernanke’s insights are well known — and free — through his blog on Brookings’ website. He says the reason for Citadel and Pimco to pay him big bucks is to find out what he — and by extension the Fed — doesn’t know or has gotten wrong. As Stan Druckenmiller, the billionaire money manager has said, the biggest investment gains often come from betting on the mistakes of central banks.