Is variable pay guilty of inflating the wage gap?

Income disparity tends to increase dramatically when incentives are factored in.
By Bryden Morton and Chris Blair 22 Nov 2019  11:00 There is no easy answer to the conundrum since incentives are generally used to attract and retain scare skills at the higher levels of employment. Image: Shutterstock

Inequality is one of the largest social ills facing not only South Africa but the global economy. The issue of equal pay across societies as well as gender and race has been discussed at length within a variety of forums.

The most prevalent worldwide issue related to equality – or the lack thereof – is the growing wage gap; the ratio of pay between the CEO and the general workers in an organisation. This ratio has been calculated using various methodologies, but the result is usually the same in that the gap is seen as too large.

Whether or not the ratio of pay is equitable depends on who you ask, but one must look at traditional pay design to find how this gap can become bigger and bigger over time if not controlled.

Incentives: How much, and for whom

The design of incentive schemes has traditionally favoured those at the higher levels as percentage and eligibility are positively correlated with job grade.

Figure 1 illustrates a typical remuneration mix design when using guaranteed pay as a base of 100 and expressing STI and LTI as a percentage of TGP for various job grade band. 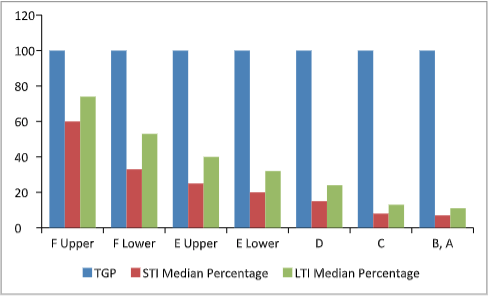 The table shows how the percentage of TGP that can be earned in the form of incentives increases as employees move up through the occupational levels.

The possibility of being eligible to be part of an incentive scheme, whether short-term or long-term, also increases as job grade increases. The reason for this is that as a person moves through the ranks of an organisation, their ability to influence higher-level outcomes increases as well.

This leads to variable pay in both the short-term and long-term often being used to incentivise performance. TGP also shares a positive correlation with occupational level.

This ultimately has an inflationary effect on the overall wage gap as the highest level occupations earn the highest percentage of benefits (both STI and LTI) off of a higher value TGP. Figure 2 illustrates South Africa’s national market TGP by grade median.

Combining the information in Figures 1 and 2, and assuming that all grades of employee are eligible for both STIs and LTIs, the inflationary effect of variable pay design can be seen.

This table illustrates how the wage gap increases dramatically as the STI and LTI get added in – for example, at the B1 level it moves from 28.99 to almost double at 57.49.

This illustrates that if the principles of traditional remuneration design are followed – and if all performance conditions are met – the wage gap increases significantly as a result of variable pay percentages at each occupational level. This is in spite of the STI and LTI being applied to the lower levels of pay uniformly.

This means the wage gap will continue to grow if performance is met in a company.

The Gini coefficient – a measure between 0 (where perfect equality exists) and 1 (where one person owns all the income) that is used to gauge how equal or unequal a society is – provides some interesting insights.

According to the World Bank, South Africa has the second highest Gini coefficient in the world (estimated at 0.63).

However, while the Gini is another indication of the wage gap, it also takes into account unemployed people. If the same formula is used on South Africa’s formal labour force, SA’s coefficient is approximately 0.45.

This means that if SA had no unemployed people and the current formal labour market was a true representation of inequality, the country would still be in the top 50 of the most unequal societies in the world.

The South African example may be startling, but similar patterns are seen around the world, albeit in varying degrees.

If we, as a society, are serious about reducing the wage gap and becoming more equitable in the labour market and society, perhaps we need to review our traditional remuneration package design principles.

The easy answer would be to apply a flat, standardised percentage to all employees at all occupational levels when designing their incentive schemes, but the reality is not as simple. This would be contrary to existing pay design principles. At the higher occupational levels, these large incentives and share schemes are often used to attract and retain scare skills – it is about supply and demand.

There is no easy answer to this conundrum given the myriad of factors that influence remuneration design. If we are truly striving for more equality in the labour market, alternatives to the current design principles need to be considered.

a microcosm of capitalism – those creating most value are rewarded most.

Some socialists think Bill Gates should be taxed more (he already pays the most individual tax in the world) – this means taking money from a person who’ proven to create jobs, value, on-going corporate tax, economic IP …and give it to a government.

But we all know the public sector is proven less efficient than the private sector.

I believe a MUCH more valuable effort would be to:
1) focused on government efficiency (actually doing their job properly) 2) clampdown on corruption (both gov & corporate corruption)

That creates a health business environment where entrepreneurs can grow wealth (which virtuously grows tax revenue).

Protect entrepreneurship & you protect your economy.

“The starting point for understanding inequality in the context of human progress is to recognize that income inequality is not a fundamental component of well-being. It is not like health, prosperity, knowledge, safety, peace, and the other areas of progress I examine in these chapters. The reason is captured in an old joke from the Soviet Union. Igor and Boris are dirt-poor peasants, barely scratching enough crops from their small plots of land to feed their families. The only difference between them is that Boris owns a scrawny goat. One day a fairy appears to Igor and grants him a wish. Igor says, “I wish that Boris’s goat should die.”

The point of the joke, of course, is that the two peasants have become more equal but that neither is better off, aside from Igor’s indulging his spiteful envy. The point is made with greater nuance by the philosopher Harry Frankfurt in his 2015 book On Inequality. Frankfurt argues that inequality itself is not morally objectionable; what is objectionable is poverty. If a person lives a long, healthy, pleasurable, and stimulating life, then how much money the Joneses earn, how big their house is, and how many cars they drive are morally irrelevant. Frankfurt writes, “From the point of view of morality, it is not important everyone should have the same. What is morally important is that each should have enough.” Indeed, a narrow focus on economic inequality can be destructive if it distracts us into killing Boris’s goat instead of figuring out how Igor can get one.”

Pay is pay. But perhaps someone can discuss the education gap, and the responsibility gap, and the ambition gap?
Things like that, that determine ones pay.
If you know what I mean?

Senseitional, agree with “Frankfurt argues that inequality itself is not morally objectionable; what is objectionable is poverty”.
The problem with the Gini coefficient as measured by the World Bank are:
The welfare payments to pensioners and kids are not taken into account,
Different years is used for comparison, eg 2000 vs 2015.