Alongside the Sarb, central banks in Indonesia and South Korea cut rates last week, while Australia, Russia and India cut in prior weeks. Picture: Moneyweb

The Monetary Policy Committee (MPC) of the South African Reserve Bank unanimously voted to cut its policy interest rate last week. This takes the repo rate, the rate at which banks borrow from the Reserve Bank, down to 6.5%, as expected by the market.

A flock of doves

With inflation on target and economic growth weak, the move makes sense. But why now? Inflation and growth have been low for a while. The big difference is that a global cutting cycle is underway, across emerging and developed markets. Central banks in Indonesia and South Korea also cut last week. Australia, Russia and India cut in prior weeks (and those are just the major economies: 26 central banks have cut rates since the end of March, with only four hiking). The most important one, the US Federal Reserve (the Fed), is expected to reduce its policy rate by 0.25% next week. 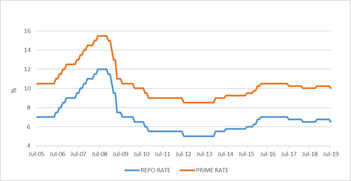 Inflation is where the MPC wants it, at the midpoint of the 3% to 6% range, and the Reserve Bank’s forecasts suggest it will remain within target for the next two years amid low global inflation and a weak domestic economy. The Reserve Bank’s inflation forecast for this year is 4.4%, and for 2020 and 2021 it is 5.1% and 4.1% respectively. Importantly, inflation expectations, whether measured as the difference between nominal and inflation-linked bonds, or by surveying households, businesses or economists, have declined. This is very important for the MPC as inflation expectations ultimately filter into price-setting behaviour.

Read: How to make the most of the latest interest rate cut Broadly speaking, there are two types of interest rates: policy rates set by central banks and rates set by the money and bond markets. Effectively, markets try to price the future path of policy rates, taking the growth and inflation outlook into account. Policy and market rates cannot diverge for too long. For instance, if the central bank is too soft on inflation, the market will drive rates higher anyway to compensate for the lost purchasing power of the income stream. Conversely, and as we’ve seen recently, global bond markets responded to the slower growth outlook by driving rates down, even in Europe and the US where the central banks have not yet cut.

In the case of the US, the Fed matters more for financial markets, and less for the real economy since most consumer and business interest rates float, and have declined well before the Fed actually pulled the trigger. The flipside is that these rates also rose sharply during the course of last year, pricing in future hikes that didn’t materialise. For South Africa, the Reserve Bank and its policy rate matters more for consumers and less for financial markets (which tend to follow global developments). Most consumer loans are linked to the prime overdraft rate, which moves in line with the repo rate and therefore dipped to 10%. This remains very high given that inflation is only 4.5% and household incomes are growing at about the same pace. However, the reduction offers some relief to consumers. For instance, a borrower with a R1 million home loan will save R166 per month. Much more would be needed to revive consumer spending, and given low confidence, consumers are also unlikely to use lower rates to ramp up borrowing.

One risk to the local bond market that was also highlighted by the MPC statement was the country’s worsening fiscal situation. Economic growth is much worse than expected – the Reserve Bank cut its growth forecast for 2019 to 0.6% compared to 1.7% at the start of the year – and this means that government tax revenues are likely to be much lower than pencilled in the February Budget and inflation is lower.  Meanwhile, the bailout demands of Eskom and other state-owned enterprises will put pressure on the spending side. The October mini-Budget will therefore probably show a budget deficit higher than the projected 4.5% of national income.

This additional borrowing adds to government’s debt and is not good for our credit rating. Whether we get downgraded by Moody’s, the last of the big three ratings agency to still consider South Africa as investment grade, depends on a credible path out of this hole.  Given this unfavourable debt and ratings outlook, the decline in government bond yields might seem odd. Partly, it reflects the expectation of further rate cuts from the Reserve Bank, but mostly it is about the collapse of global bond yields. However, our yields have fallen less than most other emerging markets – even though some, like Brazil, have worse ratings – and this reflects the market’s assessment of South African fiscal risks. In the eyes of the market, we are downgraded already. Since nothing about our budget problems is new or surprising, it makes sense that it should largely be priced in already.

Although the Reserve Bank’s independence has recently been challenged, it is still one of the key supporting pillars of South Africa’s credit rating. You can quibble whether interest rates are at the right level, but international best practice is to leave monetary policy to independent experts at the central bank, rather than elected politicians.  This might change over time, particularly as the effectiveness of monetary policy in stimulating growth is questioned. The Bank of Japan and the European Central Bank maintain negative interest rates and have bought trillions in government and corporate bonds, but neither have succeeded in raising inflation to their 2% targets. The future probably calls for closer collaboration between monetary and fiscal authorities if their economies weaken further, but for now investors expect central bank independence and demand an additional risk premium for those countries whose central banks are seen as being under their government’s thumb. This is particularly the case for emerging markets with a history of high inflation and fiscal mismanagement.

Turkey is a prime example. President Erdogan recently sacked the central bank governor for maintaining rates higher than he would like to see. Fitch, the ratings agency, responded last week by downgrading Turkey’s credit rating deeper into junk status. A recent article doing the rounds in the local financial press highlighted the similarities between Turkey and South Africa, but failed to draw the crucial distinction that, despite all the noise, the SA Reserve Bank remains independent in its policy setting. Turkey’s bond yields are therefore currently twice as high as South Africa’s, while they were similar as recently as 2016.

Partly because of the need to maintain market credibility, the Reserve Bank has been extremely cautious, looking for excuses to keep rates high rather than looking for reasons to cut. With global central banks switching to cutting mode, the landscape is shifting. For investors, South African interest rates are still attractive relative to inflation and what is available in other markets. However, for beleaguered consumers who might still have to pick up the tab for bailing out Eskom through higher taxes or tariffs (or both), the landscape isn’t shifting fast enough.

Cut rates to stimulate the economy and attract long term FDI, or keep rates higher and keep markets happy so we can attract portfolio flows and the carry trade? Being a central banker is no fun anymore.

How can low interest rates be good for FDI?

See this article that explains it better than I can:
https://seekingalpha.com/article/4275327-south-africa-nominal-gdp-compression-nightmare

Basically with our rates high relative to economic growth companies are strangled and only able to repay debt rather than reinvest earnings. Hence it becomes unnattractive for corporates to enter into the market as their ROE will be too low.

Is it just on my screen or do the graphs open very small when you click on it? Even smaller than in the article.

I absolutely love the reserve bank for keeping its interest rates high. You see I don’t have any dept so tough luck for the over indebted borrowers.

RB Cut is a purely political decision to reduce massive interest burden on Govt(ANC) debt. It is economic discrimination against people who has no debt and live within their means.

What kind of a person has no debt, do you still live with your parents?

What kind of person has no debt ?Maybe someone who has discipline ,who spends less than he earns (a difficult concept for many )and knows the difference between a WANT and a NEED !!!!
Been debt free for years and now my money works for me .

Yip, possible , no, nada, nil, zero debt ….changes your perspective on the value of your daily labour forever…now you dont work for the banks shareholders 🙂

thank you dave+izak, but i do not think it is a cut, more like a wrap.

What amazes me is that the US Prime lending rate is stubbornly “high” at around 5.75% versus 2.25% fed rate

longterm corporate debt is however very cheap : Apple bonds yield around 2.6% being basically the sovereign equivalent of corporate debt.