Advanced economies seem to be picking up and BRICS faltering.
By Jac Laubscher 7 Apr 2015  00:07

The spotlight has recently fallen a lot on South Africa’s disappointingly low economic growth, mostly because of the negative effect it is having on revenue collection and thus the national budget. Initially the country’s predicament was blamed solely on an underperforming global economy, especially in Europe, in the wake of the financial crisis of 2007-2009.

However, more recently it has become acceptable to acknowledge that South Africa’s persistently low growth is at least in part due to its own idiosyncratic constraints because it has become too obvious to deny. In the short term, economic activity will continue to be hampered by the deficiency in electricity supply, but more importantly the lack of progress with long-overdue structural reforms is catching up with South Africa.

In a report dated February 21 2015, South Africa is judged by the prestigious The Economist to be “plagued by inefficiency and corruption”. It is interesting to note that in highlighting the negative effect of global economic conditions on domestic economic growth Europe and not China usually gets the first mention. This seems to be justified by the fact that the Eurozone entered a full-blown recession in 2012/13 while China merely experienced a slowdown in growth. The Eurozone economy furthermore still exceeds that of China by one third in size (at market exchange rates), which means it is bound to have a greater impact on global conditions.

The push by South Africa’s policymakers to grow the country’s economic ties with non-traditional trading partners such as the members of the BRICS group at the expense of the Western advanced economies therefore appears to have been the right decision in the context of the Great Recession.

However, it is ironic that South Africa’s decision to increase its trade links with China in particular (the world’s biggest importer of natural resources as well as its manufacturing powerhouse) coincided with the Department of Trade and Industry adopting an industrial policy aimed at reviving the manufacturing sector, inter alia by discouraging exports of raw materials and promoting value-added production through the beneficiation of South Africa’s ample deposits of minerals and metals.

Looking back, the question arises whether the timing of the adoption of this strategy was right from a growth cycle perspective. It seems that just as the advanced economies are starting to pick up steam, the BRICS countries are faltering – see the accompanying graph in which the growth performance of the BRICS (GDP-weighted average) from 2010 onwards is compared with that of the advanced economies. 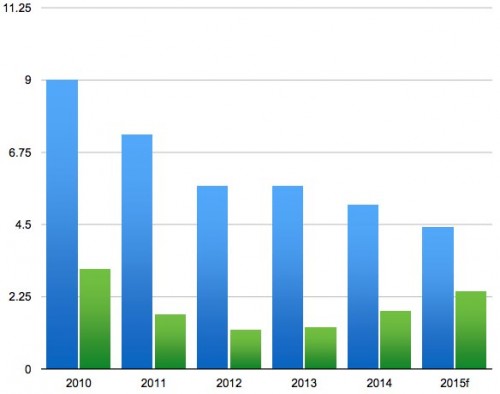 As illustrated by the graph, the growth performance of the advanced economies has bottomed and is displaying a rising trend. On the other hand, the performance of the BRICS countries is caught in a declining trend that started four years ago and appears set to continue because of reasons peculiar to each member country. Russia finds itself in a recession that is expected to continue for at least another two years. Its woes are partly to be blamed on Western sanctions, in particular financial sanctions, because of its involvement in the Ukraine crisis.

However, it is also the consequence of its inability to diversify its economy and lessen its dependence on oil and gas, with the result that it has been hit hard by the recent drop in energy prices. Brazil has suffered a decline in growth just as sharp as in the case of Russia, with its growth rate falling from 7.5% in 2010 to a mere 0.1% in 2014.

The so-called “Lula moment” has been unmasked for what it really was, viz. little more than a “China moment”, with Brazil’s economy heavily impacted by the slump in commodity markets. Brazil is furthermore mired in a major corruption scandal involving senior politicians and Petrobras, the state-owned oil company.

Growth in China is slowing and if Lawrence Summers and Lant Pritchett are to be believed it will gradually revert to the long-term global average growth of around 3.5% pa although near-term projections of 6-7% growth are feasible. China is in the process of shifting from investment spending being the major driver of 0 2.25 4.5 6.75 9 11.25 2010 2011 2012 2013 2014 2015f Economic Growth: BRICS vs Advanced Economies economic growth to consumption playing a much more important role.

However, the days of easy-to-come-by gains from moving people from low-productivity agricultural jobs into higher-productivity manufacturing jobs is over. In addition, it has a big public debt problem that will be costly to resolve. More fundamentally, many China watchers are of the opinion that for China to maintain its long-run upward trajectory and become a world leader it will have to rely less on importing technology and ideas (legally and illegally) and become more innovative itself. Whether the latter is possible given Chinese culture and politics is a moot point.

Individual freedom is the bedrock of the creativity without which innovation cannot flourish and the obsession of the Chinese Communist Party with controlling what its citizens are thinking and their interaction with one another and outsiders is not conducive to a culture of innovation and creative entrepreneurship. China is furthermore notorious for its disrespect for intellectual property, which will serve as further discouragement to innovators. It therefore requires major institutional reform before it can start to play a leading role in the global innovation race.

India appears to be in the best position of the five BRICS member countries to improve its growth performance in the near term. In the same report referred to above The Economist expressed the view that “India has a rare opportunity to become the world’s most dynamic big economy”. Compared to China, India’s demographics are more favourable and its population has proved its entrepreneurial capabilities. While China has largely exhausted the possibilities of catch-up growth, India still has a long way to go – its GDP per capita is less than half of that of China.

China is coming up against the constraints of a workforce that is no longer growing rapidly and the resultant rise in wages, while India still has to go through its own period of mass migration of workers from agriculture into the modern, high-productivity sectors of the economy. Unlike China it can realistically utilise not only manufacturing activity but also services to boost growth and development. The infrastructure drive that played a decisive role in pushing up China’s investment rate has yet to take off in India. The core challenge for India is to take the next giant step in freeing up its economy through deregulation, as it did in the early nineties.

Unfortunately, as in the case of China, the reliability of India’s GDP statistics is being questioned since their recent rebasing that resulted in drastic upward revisions to recent growth rates. Both China and India suffer from the incongruity of national and lower level growth rates, with national growth rates being implausibly high and inconsistent with the growth rates of their components.

The comparative economic success of China and India is furthermore of great significance for the debate on the relative merits of autocratic vs. democratic rule as a political system conducive to economic development. For many people the so-called Chinese miracle of the past three decades was conclusive proof of the superiority of autocratic rule. However, if India were to overtake China as the world’s growth leader (there is a strong possibility that by 2015/16 growth in India will exceed that in China by at least a percentage point) it would do much to promote the merits of democracy as a development model.

Great article for a change. Something that reads with conviction.