Rooftop solar panels have the potential to be as transformative as coal power was in earlier waves of development, and can also be a major employment avenue. Picture: Waldo Swiegers, Bloomberg

Backyard industrialisation has been tried; it was a miserable failure. During the so-called Great Leap Forward in China under Mao Zedong, peasants were encouraged to erect steel furnaces in their back yards. Predictably, most people had no idea how to build a mini steel plant much less make steel, and there was no market for their wares. The result was economic disaster.

But you don’t have to invoke Mao to see that most production tends to be centralised. Manufacturing tends to cluster in factory towns, and these towns are connected by roads and rail. Infrastructure is essential to development — factories need to ship in raw materials and parts and ship out finished goods, and workers need to travel from home to work. Energy, sewage, broadband internet and infrastructure are also essential for offices and factories. Good transportation is important for more subtle reasons — salespeople and marketers can more easily get a feel for demand in nearby areas, and engineers and other knowledge workers can more easily intermingle and exchange ideas.

This is probably why the world’s rich countries tend to be those with effective centralised governments that are dedicated to building infrastructure networks. Any list of countries with the best roads, tunnels, ports and electrical grids is dominated by rich nations such as Switzerland, Japan, France and the US. And it’s probably why China, which pours a large share of its economic output into building infrastructure, has grown and industrialised so rapidly.

But that means countries without competent central governments are in trouble. This is especially a problem in Africa, where political stability was elusive until recently. Corruption is a big road block for infrastructure there as well. But even countries with stable, centralised systems can struggle to build world-class road and transit systems — witness India, where subpar infrastructure has long been seen as a barrier to matching China’s manufacturing dominance. India is doing a bit better recently — its spending on roads has risen and quality has improved, but land acquisition costs are still a major impediment, and corruption remains a problem.

The infrastructure problem will eventually become less severe, as poor countries in Africa and South Asia figure out how to improve governance, spend more effectively and bring down costs. But in the meantime, another force is emerging that could make things easier for the next wave of developing nations — technology. A number of major recent innovations are making fragmented, geographically isolated systems of production more feasible.

The first such technology, not surprisingly, is mobile phones. By allowing information to be sent long distances without networks of roads, phone lines or broadband, mobile phones are changing Africa rapidly. Already, mobile penetration is very high: 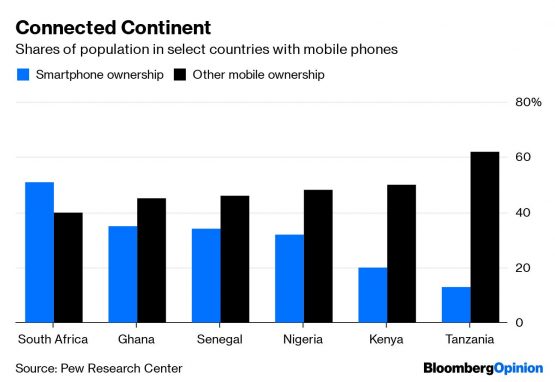 Agriculture, in turn, has been transformed — mobile phones allow farmers to trade and learn about prices, get weather forecasts and buy insurance and other crucial financial services, all without leaving their fields. Finance is also transforming Africa, which is now the world leader in mobile banking. A 2018 McKinsey report called Africa’s mobile fintech sector a “hotbed of innovation,” and a report by the Brookings Institution suggested that information-technology services could serve as a big source of employment for the continent’s young workers.

The second key technology is solar power. Although solar is cheapest when done at large scales, it doesn’t have to be — rooftop solar panels already allow many buildings to go off the grid. In countries where the grid doesn’t exist, or is patchy and unreliable, rooftop solar can be as transformative as coal power was in earlier waves of development. In addition to allowing factories to operate without centralised power grids or expensive on-site generators, solar power also can be a major source of jobs; already, some estimates show as many alternative-energy jobs in sub-Saharan Africa as in the traditional power sector. (And all this is in addition, of course, to the environmental benefits.) Improved battery technology, allowing easier transport and storage of electrical energy, will only complement this trend.

A third potentially helpful technology is 3D printing. In rich countries, where it’s generally cheaper to order parts than make them yourself, 3D printing has been mostly used in niche applications such as rapid prototyping. But in regions where road transport is slow and unreliable, and where regional suppliers may not even exist, factories may find it more convenient to simply 3D-print needed components.

In other words, a revolution in technology may change the way production networks. That doesn’t mean infrastructure will ever stop being important, but the minimum needed to start the process of development in a poor country or region could be reduced. The next wave of industrialisation could see more factories and offices in Africa and South Asia supported by a thriving information-technology service sector. Thanks to the magic of innovation, backyard production could make a comeback.

Electricity, mobile networks, infrastructure etc are merely inputs that every business needs in the economy. Reducing the cost or improving these inputs just shaves down the cost of doing business.

What Africa needs is to figure out it’s competitive advantage. What can it make or add value to the global economy that other countries can’t.

Since African governments can’t figure this out and focus on sustainable industries, we’re destined for general poverty and pure export of un-beneficiated raw materials as per the last 500 years on the continent.

Pie in the sky
Educate and evaluate population honestly according to leading nations , not gyppo stats as put out by uneducated Anc cadres.
Then we can talk about smart industrialisation