The economy is alive and kicking

Justification for a belief that the economy did not contract meaningfully during the 3rd quarter is provided by several key indicators.
By Dr Roelof Botha 9 Dec 2021  14:07

Literally hundreds of jokes exist on statisticians and statistics. There are good reasons why hardly any of them are flattering, as once again demonstrated by the GDP data for the 3rd quarter of 2021, published by Statistics South Africa (StatsSA).

The statement that the South African economy contracted by 1.5% during the 3rd quarter is misleading, as this figure has been subjected to a calculation of quarterly GDP data that has been annualised and adjusted for inflation via a variety of deflators.

When following the good advice contained in the Glossary of Statistical Terms published by the Organisation for Economic Cooperation & Development (OECD), namely to simply calculate real quarterly GDP growth rates on a year-on-year basis, deflated by a benchmark deflator such as the consumer price index (CPI), a much rosier picture of the South African economy emerges.

During the 3rd quarter, total economic output at market prices amounted to R1 566 billion. The figure for the same quarter in 2020, adjusted by the CPI, was R1 474 billion. This represents a healthy real growth rate of 6.2% — not half bad when considering the shenanigans of the looters that hit parts of KwaZulu-Natal and Gauteng in July! In nominal terms, the year-on-year growth rate was very impressive, namely 11.5%.

The table below illustrates the substantial difference between the growth rate calculation that is always highlighted by StatsSA and the one recommended by the OECD (measure no 4, printed in bold).

Two significant advantages of utilising year-on-year comparisons of quarterly GDP data rather than a quarter-on-quarter approach are, firstly, the avoidance of magnifying irregular economic phenomena, such as harvesting seasons for agriculture and chance events, such as a natural disaster or a health pandemic.

Secondly, it obviates the need for complicated formulae aimed at eliminating seasonality. As such, the year-on-year approach is more objective.

Justification for a belief that the economy did not contract meaningfully during the 3rd quarter is provided by several key indicators, including the following: 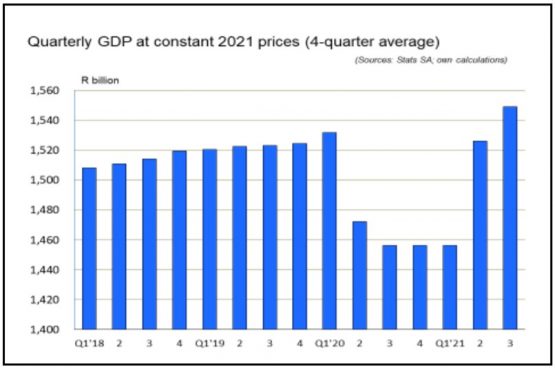 There is no doubt that the South African economy underperformed during the 3rd quarter, mainly as a result of the July unrest. It is disingenuous, however, to create the impression that economic activity is in decline when exactly the opposite is true, as vividly illustrated by the increase in the four-quarter moving average for quarterly GDP to a new all-time record high (in real terms).

We can slice and dice it, and massage the models to fit the narrative, but after all is said and done, electricity consumption per capita is the most accurate indicator of economic activity.

Local electricity consumption per capita has shrunk by 12.5% since 1997, while it grew by 370% in China over the same period. China grew its GDP per capita by 74% since 2010 while ours contracted by 38%. The Chinese unemployment rate is 3.8% while ours is more than 10 times that.

It is clear that our economy has reached the terminal stage after it has contracted the socialist disease.

“It does not matter whether the cat is black or white, as long as it catches mice.” These pragmatic words by Deng Xiaoping sum it up and describe the cause of our economic catastrophe. The idealistic, impractical, unrealistic, and inefficient redistributive policies of the ANC favour the black cats that don’t catch mice. They rely on the white cat to catch the mouse, and then they confiscate that mouse with BEE laws.

That old saying goes: There are lies, damned lies and statistics.

I’m more pragmatic – we have a national power generator that is in collapse – the proof is visible every day; over 40% unemployment – how many people are you seeing at the traffic lights?; a defence force that is unable to defend the country – refer Mozambique terrorism and the airforce which is grounded through lack of parts and service; a navy that does not have the budget to maintain the fleet which will soon be rusting in harbour and a tinder box which could erupt yet again like July which cost the country R30 billion.

But the economy is alive and kicking … in its death throes, I think.