The inclusion of the Yes/No votes on policy and implementation has given rise to shareholder activism on executive remuneration.
Bryden Morton and Chris Blair  /  29 February 2020 00:05 Principle 14 of the King IV code on corporate governance has made for some lively AGMs, and a not inconsiderable amount of introspection on the part of companies. Image: Shutterstock

A full examination of the changes between King IV and King III is not recorded here. However, some of the key changes include:

King IV’s layout is rather simplified in comparison to King III and has been written as 17 principles. Principle 14 specifically deals with matters related to remuneration and remuneration reporting.

“The governing body should ensure that the organisation remunerates fairly, responsibly and transparently so as to promote the achievement of strategic objectives and positive outcomes in short, medium and long term.”

The inclusion of the Yes/No votes on policy and implementation has given rise to shareholder activism as shareholders now have a mechanism that allows them to express their approval or disapproval of the company’s plans.

The graph below illustrates the results of these votes and allows the reader to make an interpretation about the company’s remuneration policy and practice based on these votes.

It indicates that shareholders tend to vote similarly on both the remuneration policy and implementation thereof (the trend line is at an almost 45 degree angle). This is not unexpected as companies that have approved policies probably implement them well, whereas a company that has an unapproved policy will probably have the implementation of the policy unapproved as well. 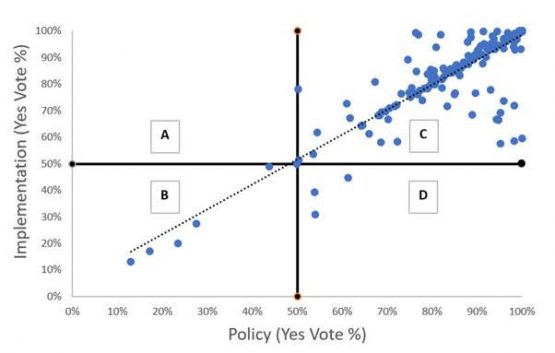 The graph has been divided into four quadrants that can be explained as follows:

Quadrant C: This quadrant indicates in excess of 50% ‘Yes’ votes for both the remuneration policy and implementation. This is where an organisation wants to be. However, it does not guarantee that their shareholders have accepted their policy and implementation. The standard to be exceeded is 75% ‘Yes’ votes on both matters, which means the closer an organisation is to the top right hand corner of the graph, the better their result is.

Interpreting the graph leads one to believe that shareholders are rational in the manner in which they vote. Quadrant A is empty as shareholders do not vote positively for implementation if they do not agree with the policy. This makes sense as the policy is the guide for the implementation and correctly implementing a ‘bad’ decision results in a negative outcome.

The almost perfect 45 degree trend line 1 provides further evidence that the policy and implementation votes tend to yield a similar outcome compared to each other. Quadrant C is the most highly populated quadrant which indicates that although not all organisations have received in excess of 75% for both the remuneration policy and implementation, the overall trend is that organisations are not producing policies and outcomes that are unanimously viewed in a negative light.

The rise of the Yes/No vote on remuneration policy and implementation has provided shareholders with a voice with which they can communicate their views on remuneration within the organisation. It appears that these votes are being used in a responsible manner, and it would be interesting to see if King V makes provision for a binding vote on these issues in the future.