Will Ramaphosa’s Youth Employment Service be the exception in a long line of failures?
By Mamokgethi Molopyane 4 Apr 2018 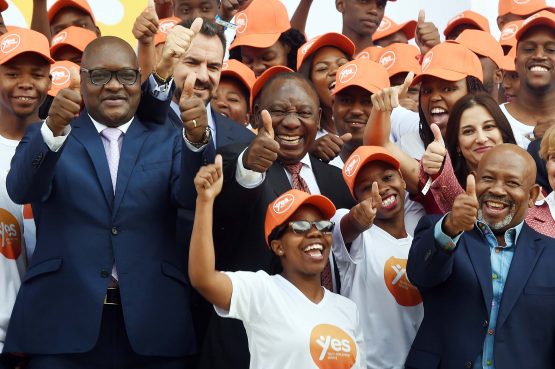 The Youth Employment Service (Yes) launched last month by President Cyril Ramaphosa is, according to its website, the ‘first social compact between government, business and labour created to give one million young South Africans paid work experience over the next three years’. One hopes this will yield some positive results throughout the year and in years to come. One also hopes this is not merely about appearing to keep up with Sona promises.

Personally, I’d like to be optimistic but South Africa’s record on helping her youth has failed spectacularly. We haven’t made much of a positive impact following the launch of youth unemployment-related initiatives. We have no idea how to enable our youth to face the world of work, let alone take care of them. Even worse, at times when we’ve tried to help, we managed to create pockets of such uneven results, which have alienated most young people who can’t afford post formal school education.

This is not just my opinion but these are facts and here is the evidence. A generation ago, there was the Umsobomvu Youth Fund and the National Youth Commission; both turned out to offer little help while those who led them are sailing somewhere on the golden parachute. Later, the two were merged to form the National Youth Development Agency (NYDA). The newly-formed entity then became less about the youth and more about the battle between the ANC Youth League and the Young Communist League of SA (YCLSA) for political gains. Again, youth in areas such as Fafung, Hlankomo and Postmasburg are yet to benefit.

And then there is the Employment Tax Incentive (ETI) programme that encourages companies to employ the youth and in turn offers them a reduction in PAYE payable each month to Sars or a physical cash reimbursement to the company. This too has benefitted companies more than the young job seekers and Stats SA* drives this home with the following data:

The crucial issue in this evidence concerns government policy approach and strategies, which are irrelevant and lacking. A government that’s scratching its head on how to solve its unemployment crisis is worrying, however the biggest indictment to me remains how corporate South Africa, even when incentivised, hesitates or is reluctant to employ its country’s recently-graduated youth. This to me reveals hypocrisy in the claims of being interested in a prosperous economy for all and willing to work with government to achieve it.

Unless there is a miraculous change in how Yes is set or will work, then it too will soon be in the box of beautiful things (initiatives) that are totally useless. By all means, let us have as many programmes as we want if they will get our youth employed, earning income and gaining experience. But also, let us be pragmatic in doing so by factoring the skill needs of the private sector, as we want it to employ most of these youth and not government.

I am therefore filled with concern while hoping that Yes will be the exception in the long line of failures. My worry is that the incubation approach has proved to be a successful enough model to replicate even for the youths who live in nearby townships – access being the biggest barrier. Now, consider millions of young people across the country but especially in rural areas where transport costs are high, and getting to town can take a one to two hours’ bus ride.

Perhaps my biggest worry is that for all their good intentions, approaches such as Yes may lead to government, business and labour thinking that unemployment can be solved simply, or mainly by incubation hubs, a step-by-step guide on CV preparation and reading up on work readiness resources. Those are not real answers but are more on the palliative side – they prepare our youth for jobs and perhaps enable them find out where opportunities are.

I have previously written a suggestion and I will not do so here. I will however say I’m encouraged to see the business sector enthusiastically embracing this new dawn with its CEO Initiative. The personal opinion I sketched at the beginning of this article holds: I really hope the Yes initiative succeeds because it is in every South African’s interest. Every time an initiative aimed at lifting our youth out of poverty and into employment fails or is ineffective it entrenches inequality.

“YES”!! it will fail, no initiatives from the ANC govment will ever succeed, been trying for 24 years, and could only succeed in a downgrade … excluding the minority from business, but expecting the minority to finance CR’s “vote ANC” and “vat so! EFF” propaganda,…get BBSA to finance and labour this BEE initiative, I am a bit “gatvol” for ANC initiatives,…the new dawn, same old “wet van Transvaal…en betaal”, and 4 years from now, one million, in the unemployment line.

“YES”, a new money pit for cadres to profit, 3 years to scheme and steal, all in the name of Youth Employment, “YES” this is ANC-DNA. Government is not making it easier for business, instead the opposite or is the “minority” business ownership next in line, for the ANC -“without compensation” plan?

no because they live in the past and thus have no future!

Negative people like you that have a problem for every solution are the problem with this country…Let us give credit where its due and not always be naysayers all the time because its ANC(I’m not an ANC supporter). Black people are seriously poor in south africa. This is a solution. Lets help

they are squandering my hard earned tax money….so maybe I’m entitled to be a little negative.

The real “solution” is PROPER education of the youth, enabling a sustainable long term benefit to SA. (These programs, irrespective how commendable, are all short-term with limited results.)

(…a good education is critical for a country’s competitiveness. Look at myself…with little education….and now I’m convinced the earth is FLAT like many Americans! NASA is lying to us all…)

After all, the more that are earning, the more stable a society is and less demanding

I agree with Tim Rice – Youth Initiatives should be realistic and artisanal skills are the way to go. If you’re going to build a better South Africa, you need people that can build! Plumbers , electricians, builders. – all that free land shortly being made available is going to need building skills so get going guys!
And whilst you’re about it, what about Nurses and healthcare assistants, teachers and trainers …. The Department of Education needs a total overhaul – no more pit latrines – real teachers that care and funding that actually works for the schools and is not stolen or diverted.

those jobs require taxes to be paid, will you pay more tax to employ another teacher or nurse?

No need to pay more taxes. Rather government must stop stealing tax money.

State employees in all categories are paid for by the state – I>E out of tax payer revenue, so in reality it’s just circulating an already depleted treasury and NOT contributing to real growth and further entrenching a well established ideology of socialism, which history clearly shows will soon run out of other peoples money..

Only GDP growth can create jobs, and the GDP will only grow if government lets go of its choking grip on the throat of the economy.

The economist Dawie Roodt will share your view as well, in his book “Tax, Lies and Red Tape”.
He goes to the extreme, stating only Govt needs to provide is rule of law (Police, the court system & national defense)…everything else, incl the education system, needs to go private. (In an ideal supply & demand equasion, there will be thousands more private centers of leaning excellence, competing with each other to drive prices/costs down.)

And with much lower tax (to fund a tiny Govt core) there will be billions of extra money within the efficient economy.

And what happened to Zuma’s FIVE million jobs, and then SIX million job opportunities???