The billionaire investor passed up many acquisitions last year, but he may be seeking something new this year.
Tara Lachapelle, Bloomberg Opinion  /  1 January 2020 00:03
6 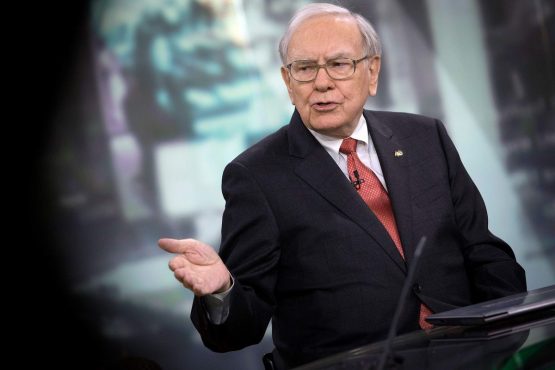 Billionaire investor, Warren Buffett is the fourth richest man in the world and is an 'icon' within the investment community. Image: Bloomberg

He’s making a list and checking it twice, but can’t find a takeover target that’s nice.

Warren Buffett is the jolly man of the stock market. However, the chairman and CEO of Berkshire Hathaway Inc. had also been a bit of a Scrooge last year, as he continued to pass up acquisitions and instead hoard his money. The billionaire has long been seeking a really big deal on which to spend some of his company’s $128 billion of cash, except everything is overpriced in his view. To make matters more frustrating, Berkshire’s own shares are lagging behind the broader US market by the most since 2009.

While 2019 wasn’t Buffett’s worst year, it was surely one of his dullest. With Berkshire’s cash pile reaching new heights, Buffett has said that just the thought of taking over another company — he’s acquired nearly 200 during his career — causes his heart “to beat faster.” Instead, this chart of Berkshire’s stock performance looks like it’s almost flat-lining: 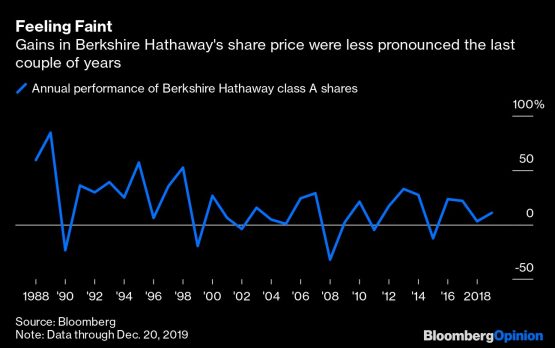 Berkshire shares are on track to end the year up a modest 11%, trailing the S&P 500 index by 20 percentage points. That’s even as the company posted record operating profit in the latest quarter.
Buffett, who turned 89 in August, is the fourth-richest person in the world, and it’s hard for the fourth-richest person in the world to have too bad of a year. But for one of the most celebrated investors and dealmakers of all time, who also enjoys basking in the spotlight, the deal dry spell isn’t much fun. Without any new acquisitions to rave about, even Buffett’s highly anticipated annual letters — the release of which investors treat like tickets dropping for a Beyonce concert — lately have been shorter than usual and have lacked his characteristic bawdy metaphors. (That’s not to say a retreat from the dirty-grandpa humor isn’t welcomed by this writer.)

Berkshire’s last large takeover — the kind he dubs “elephants” — was Precision Castparts, an aerospace-parts supplier, for $37 billion; it was completed nearly four years ago. In 2019, Berkshire merely provided $10 billion of high-interest financing to help another company, Occidental Petroleum Corp., make an acquisition; that barely put a dent in Berkshire’s cash. It was then outbid in November for software distributor Tech Data Corp. in what would have been a $5 billion deal. Berkshire had considered selling debt in Europe, which might have been a precursor to a significant acquisition overseas, but that never panned out. At the end of the day, the company’s splashiest investment of the year was an $861 million stake in Amazon.com. The closest thing Buffett found to an elephant might just be this stuffed animal, an item sold at RH, a small home-furnishings retailer in which Berkshire recently bought a stake.

Though it was a boring year, 2019 marked the end of what was perhaps Berkshire’s most transformative decade. It became the owner of one of America’s most expansive railroad systems, BNSF, while recognisable brands including Duracell and Kraft Heinz (for better or worse) also joined the Berkshire family. At the start of the decade, consumer stocks such as Coca-Cola and Procter & Gamble accounted for the biggest share of Berkshire’s stock-market holdings. Now, Apple Inc. and some banks and credit-card companies together comprise almost three-quarters of its portfolio. Buffett also took meaningful steps toward succession planning by promoting Greg Abel and Ajit Jain to oversee all Berkshire’s operations and thus raising their public profiles. 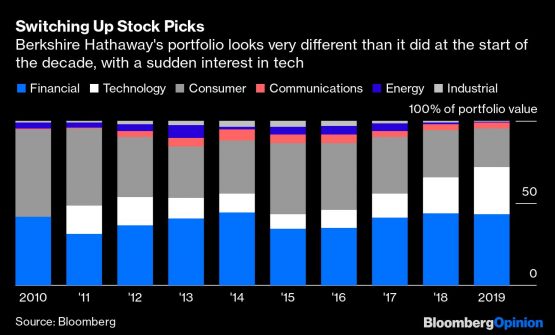 Buffett and Berkshire Vice Chairman Charlie Munger — who turns 96 on New Year’s Day — were asked during the last shareholder meeting in May whether their successors will have to transition the company from an acquisition-and-investment vehicle into an entity focused instead on returning capital through stock buybacks and dividends. “That’s certainly a possibility,” maybe even during his time, Buffett said. “But we will have to see how that works out over many years, because certain years huge opportunities present themselves and other years are totally dry holes.” Berkshire spent about $2.8 billion repurchasing class A and B shares in the first nine months of 2019, up from $0 in 2017. US stocks haven’t been getting any cheaper for Buffett. That said, some see his hoarding of cash partly as an insurance policy in case his health deteriorates, so that there’s added financial flexibility for the next CEO. But knowing Buffett, he’ll want to go out with a bang. Finding one last elephant should be his New Year’s resolution.

I am perplexed by the annual migration of the herd of animals who describe themselves as “Buffet groupies”. They flock to Omaha on an annual pilgrimage to learn something new and to pay homage to the leader of their clan. Make no mistake, I just love Mr Buffet and I read his insights and annual reports, so I am not taking anything away from this brilliant investor.

The point I am trying to make is that the herd of groupies are at the wrong premises, they pay homage to the wrong guy, they are confused by the difference between nominal and real growth. The nominal growth over the last 2 decades in the value of BRK was driven by the Chairman of the Federal Reserve, not by Warren Buffet. The value of the shares increased by 352% over the last 20 years.

If we remove the results of the actions of the Chairman of the Federal Reserve, then the shares did nothing over the past 20 years. In real terms, in terms of a stable currency that cannot be debased, in terms of ounces of gold, the price is 20% below the level of the year 1999.

Moral of the story? The Stellenbosch guys, Jannie Mouton, Michiel le Roux and Riaan Stassen run circles around the Omaha guys. Jannie Mouton studied Warren Buffet, and then beat him at his own game. The crowd of international financial groupies should flock to Stellenbosch, but their internal compasses are corrupted by the Federal Reserve. We have some of the best businessmen in the world. The problem is that we are dependent on some of the worst politicians in the world.

It is a real pity hey?

However, memories are very short. If you look at other companies in the PSG group such as Paladin Capital, where did they disappear to?

Additionally, Capitec is very much the dark horse that turned into a unicorn.

PSG Group themselves leave a lot to be desired. I have been a client of theirs for the past 10 years and I am in the process of moving away. Their returns have been shocking (I have received multiple times greater returns than what PSG has given me) and their customer service has been a lot worse than ordinary.

So to pick the diamond from lumps of coal is quite easy in hindsite. But you also need to keep that memory sharp to remember the flops along the way.

Too true, Sensei. I refuse to flow with the tide of negativity that currently swamps our news pages. We have very able businessmen in SA. We have massive potential in our mines. We have some of the world’s best supplies of sunshine plus excellent wind power from 3000kms of coastline. What is needed is for the voters of this nation to realise that it is THEY who are being robbed by the unions. By the seriously corrupt politicians in govt. We spend more per capita on education than most countries, yet we have millions of (largely Black) kids scarcely able to read or write correctly, thanks to the efforts of SADTU. May Cyril Ramaphosa, Tito Mboweni, Pravin Gordhan, Lesetja Kganyago, Edward Kieswetter, Mogoeng Mogoeng, Shamila Batohi and Hermione Cronje take a firm stand in 2020, and may we see many corrupt politicians in orange jumpsuits this year. Only then will we turn around as a nation, but it is possible.

Buffet is an ultra long term investor,must be judged as such.20 years is indeed long term,but remains to be seen how things will unfold for PSG & co in the next 30 years or so.
For over 50 years Buffet has been outperforming the market on a relative basis.
Perhaps old age might clout his judgement lately,if at all.
Form is temporary,class is permanent

I agree. Buffet, like PSG, buys value. “Price us what you pay, value is what you get” – Warren Buffet.

The determination of value is being distorted by currency devaluation. If I can add some value to this forum, no matter how infinitesimally small that value might be, then it is to price assets and value in terms of gold, not in terms of fiat currency.

We need a sound yardstick if we want to measure and compare relative performance. If you have to live off the value of your savings, then you have to use an accurate metric to measure that value.

We are paying real taxes, management fees, as well as performance fees in some instances, on pseudo capital gains while we are trying to save for retirement. The costs are real, while the growth is not.