Zimbabwe burns while the lights are out

As inflation soars and power supply dwindles Zimbabweans are struggling through life.
By Cathy Buckle 20 Jul 2019  09:12 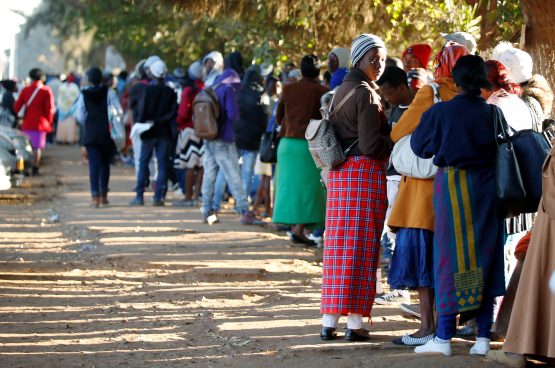 A red light or high pitched alarm are the two most dreaded things in our lives in Zimbabwe today. They mean that the car has almost run out of fuel, the prepaid electricity meter is about to run out of money, the phone battery is almost flat, the internet connection has gone, the inverter battery is dying. And when the red lights go off completely we just grind to a halt.

After weeks of 12 to 17-hour-a-day power cuts we are worn down to a frazzle. Getting up in the middle of the night, every night, to cook, charge batteries and electronic equipment, catch up on domestic chores, work on computers, meet deadlines and keep any sort of production going, is taking a heavy toll on all of us. People running businesses are forced to put prices up to cover costs of using generators. Others are cutting staff down to one or two days a week and others are just closing their doors altogether.

We hear of farmers ploughing wheat crops in winter as they cannot irrigate without electricity and cannot afford the hundreds of litres of fuel needed every day to run generators and remain viable. In my home town and many others, the water situation is dire.

As I write, the whole town has had no water for over a week. Local authorities apportion blame to different departments and either say there is no money to buy chemicals, no electricity to run pumps or that they are doing refurbishments. Which one is true we mutter as we bend, stoop, fill and carry buckets and boil unsafe water on open fires outside.

This week the official inflation rate for June 2019 was announced; jumping from 97% in May to 175% in June. According to Zim Stats the “prices of basic goods from sugar to cooking oil to building materials soared during the month by as much as 200%.”

In the month since the government banned trading in anything except Zimbabwe dollars, the new but mostly non-existent Zimbabwe dollar has lost 27.9% of its value. The ability to change US dollars cash into Zimbabwe dollars cash is all but impossible, despite being required by law. Going into a bank in my home town I asked if they could change US dollars to Zimbabwe dollars. Oh yes, they said and told me the rate of exchange for the day. Trying then and there to change US$10 cash into Z$ cash wasn’t going to happen however. “I can only do it if we’ve got the cash,” the teller said and advised me to come back every day to check if they had cash. “You never know when you’ll be lucky,” he said and went on to try and persuade me to open an account there; an account which attracts a minimum balance, administration and ledger fees, 2% mandatory government tax on transactions over $10, debit card fees etc.

Outside in the sun scores of people were just waiting to “be lucky,” either to be able to withdraw their meagre monthly government pension of Z$80 in cash or to get the US dollars cash that had been sent to them by their relations outside the country via Western Union, Mukuru or other international currency remitters.

Absurdly, ironically, while getting Zimbabwe dollars out of the banks is almost impossible, the Reserve Bank governor, John Mangudya said it was just about to revise upwards the weekly withdrawal limit of Z$300. Revising the limit upwards at a time when you can’t withdraw any Z$ at all; how does that work? Not to mention the fact that the existing weekly limit of Z$300 is the equivalent of less than US$5 a day.

Equally absurd is the claim made at every opportunity by the Minister of Finance that Zimbabwe has been recording a budget surplus since December 2018 and continues to do so. The minister doesn’t mention the fact that it is us, the people, who have to pay 2% tax on every electronic transaction over $10 and we assume that’s where much of the budget surplus comes from. We also assume the 2% tax is the reason why it’s almost impossible to get cash because if you pay in cash you don’t pay the 2% tax. The minister also doesn’t explain why the budget surplus isn’t used to pay off electricity debts and resume power imports from South Africa and Mozambique.

Read: Zimbabwe expects to pay $10m to Eskom by end of Monday

Behind all of this absurdity are the countless numbers of people of all ages and races across the country who are simply falling through the cracks. A man told me about the mountain of medical bills waiting to be paid for his 83-year-old dad who had been in a car accident. Medical specialists, no longer allowed to charge in US dollars, have multiplied everything by ten or more. An anaesthetist’s charge, quoted at US$850 is now Z$9 000. Rural teachers who were earning US$438 a month now find their salary only worth the equivalent of US$49. In a petition to the Ministry of Finance they said “We have been robbed of our dignity. We have been reduced to paupers.”

An appeal from an old age home in Harare, in operation for 50 years, who say they have reached a crossroads and do not know how to continue without urgent assistance. They are crippled by huge fuel prices needed to run generators during 17-hour-a-day power cuts. Generators for preserving food, cooking, lighting, heating water and providing oxygen to elderly residents with breathing difficulties. They say their food prices have quadrupled, that their staff are struggling to feed their families. The chairman of the home writes that they need a miracle to remain “standing strong in the winds of change”.

Heartbreaking stories are all around us from the young and old and everywhere you look, in every shop and supermarket people look dazed and bewildered, looking at prices of the most basic items and leaving without them.

As I write this letter the late winter annual slash and burn environmental devastation is underway: unchecked, unstoppable: cut the trees, burn the grass, acquire a piece of wetland, or green belt and call it your own “self apportioned plot”. Zimbabwe burns while the lights are out.

Until next time, thanks for reading this letter from Zimbabwe, now in its 19th year, and my books about life in Zimbabwe.

What’s that definition about people doing the same thing over and over again expecting different results?

Sounds like hell on earth, but as long as there’s still icing on Bob’s birthday cake all is well.

When you vote Zanu PF, that’s how you roll. We’re close on your heels down here

This is a horrifying glimps of SA’s future, because just like voters in Zim keep on electing the ZanuPF, so they continue voting EFF, ANC and DA (same policies as the ANC) in SA.

Cathy – you guys have terrific moral fibre to keep up with all this!! Really do hope things will come right but after a visit to the DRC I realised that Zim still has a way to go on the downward slide and the RSA is gathering speed downhill.

Zimbabwe is being turned into abyss by a tyrant man who deposed Robert Mugabe in a well calculated Coup who the rigged and manipulated election results to stasify his ego and greediness for power at the expense of the rest of Zimbabweans.This which is a sad story for Zimbabwe because this Man is ten times much more evil than Robert Mugabe.Old wine is tasting too bad for Zimbabweans and their wine does not mature with age it actually goes bad.No hope now for Zimbabwe for the next 40 years…….

You have a lot of opinions for someone who doesn’t even know his name.

1. Why stay? You have a life to live elsewhere.

2. Only solution for Zim and other failed states, is some form of UN takeover, restoration of the economy and political system for say 10-15 years, prior to exiting.

This lot have shown themselves to be incapable.

It is truly very very sad. The hardship and suffering makes life a living hell.

I hope and pray every Zimbabwean comes to their senses.

Every nation gets the government it deserves.

Clearly Zimbabwe is close to the target of being totally transformed. Transfomayshin nirvana approaches…

I hope your watching closely, anc, eff and the rest of you communist morons…..this is where you are rapidly taking our country….down the toilet of your arrogance and knowitall racist ideology!

I have never read anything positive penned by you,,,to borrow from President Trump, if you have nothing good to say, “Please leave, juss go, Please go”. Some ministers are going all out to rebrand the country as a tourist destination, as a business friendly or investment friendly destination and here you are moaning and groaning about virtually everything. Please juss go. Yes there are issues and if all citizenry pull in one direction nothing insurmountable. But with you and your ilk, we surely are doomed. For the millionth time, you are free to go.

In 1980 Julius Nyerere told Bob Mugabe: you have inherited the jewel of Africa don’t mess it up.

At Humba
You should be in politics. 80% of SA would vote for you

So quick to pick a gun and fight Ian Smith but rather lax when confronting their dictators which they so happily vote for and allow the extreme destruction of their country.

Oh yes Zimbabwe, the wonderful example that the ANC wishes to replicate in South Africa. Freedom and democracy has never being so insulted.

Hating the business people, promoting equal poverty for everyone, and there you have Zimzuela !! Good luck, poverty will only get worse, again and again. Promises and threats of hatred will rise, and above all, more absurd excuses and scapegoats will be found.