Hotelier chats about the business rescue deal for the resort hotel costing more than anticipated and gives an update on other opportunistic investments in the tourism industry in the face of Covid-19.
By Suren Naidoo 10 Sep 2021  00:01 With September being Tourism Month in South Africa, we are chatting to movers and shakers in the tourism industry, in particular hotel property owners and developers.

In this episode of The Property Pod, I speak to Marc Wachsberger, founder and CEO of The Capital Hotels (and Apartments) Group, who was making waves in the hotel industry before Covid-19 hit.

When we last spoke, Moneyweb broke news of his group buying the Fairmont Zimbali Hotel in Ballito as part of a business rescue deal, after the initial Covid-19 financial fallout saw the hotel close its doors.

Wachsberger secured the resort hotel in a R240 million deal at the time. It was seen as a steal, but in this latest interview he shares some of the lessons he learnt.

He also talks about the group taking over management of Cape Town’s 15 on Orange Hotel (rebranded with the Capital name) and other opportunistic investments, like the Capital Mbombela in Mpumalanga, which is under construction.

The ‘old’ Fairmont Zimbali Hotel on KwaZulu-Natal’s North Coast will reopen in November as The Capital Zimbali. Image: Supplied

“We still think it [Zimbali] has been a coup. But things are not as wonderful as they may have been reported … I have people coming up to me time and time again, saying: ‘Wow, you stole it! What an incredible price you paid for it.’

“But what’s interesting is, if you think about what it actually takes to renovate a 24 000m² building consisting of only 130 rooms, it was a monster property – with the cost and the effort of renovating it and the politics and issues in dealing with multiple owners and business rescue and all different stakeholders, as well as the legal costs and the cost of the renovation – it starts to add up and it gets to the point where you think what you’ve bought as a steal is not necessarily such a steal.”

Wachsberger anticipates the upgraded end-product, renamed The Capital Zimbali, will be targeted to the local leisure market.

“We can see [that] in Covid times this is actually a product that’s highly in demand, so we are extremely excited that it’ll be well worth it in the end.”

When is the hotel reopening and how much was actually spent on the revamp?

“I think we’ll end up north of R50 million in terms of the renovation costs when you start taking into account legal fees … [and] things like capital-raising fees – which is something that not a lot of people consider – as well as the interest-holding cost while we’re innovating.

“From a property perspective, these are things that people sometimes forget. It’s not that we forgot about them, but I’m saying this has definitely added to the cost and we’re running about two weeks late.

“We’ll open more likely in the beginning of November. We are late because of the riots [in KwaZulu-Natal].”

“Property development is ‘not for sissies’. You have a hundred different balls that are up in the air at any one time. One of those balls is steel being delivered timeously, and with the riots the steel never arrived timeously.

“That’s obviously had a knock-on impact throughout the project, which caused a two-week delay. It should have been about a six-week delay but, again, the ability to mitigate and be agile and adaptive to these changing environments meant that we could claw back some time.

The group’s other new investments …

“I’ve always said you need to use the downtimes, the bad times, as a chance to expand. So, for us, Zimbali, the Capital Mbombela, as well as the Capital 15 On Orange in Cape Town, were all part of our expansion list.

“If you look at 15 On Orange in Cape Town, we’ve already done that renovation; we opened in the middle of August, and it’s been a great renovation. People are rave-reviewing it. There’s quite a lot of vibe going on in a hotel that’s normally, you would expect, quite empty.” 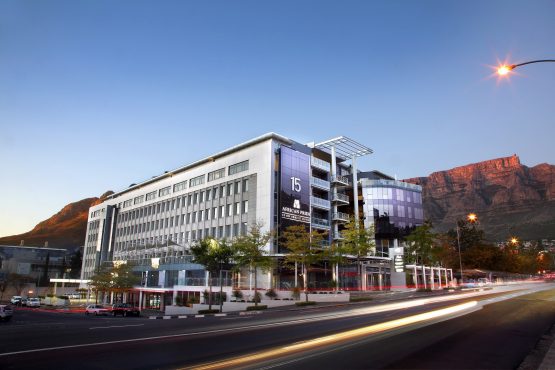 Spear Reit’s 15 on Orange Hotel in Cape Town has reopened and is being managed by Capital Hotels. Image: Supplied

“Cape Town is at the epicentre of the [tourism industry] Covid storm, yet our hotel is brand new, vibey and busy. Why it is, is [that] we’ve had to be innovative about very good opening specials to make sure that we expose the property to the market.”

“We’ve also introduced 25 apartments [at Capital 15 on Orange]. We’ve converted the 60m² metre hotel rooms into apartments. That’s a product in the post-Covid world that we think will do very well …

“And then the Capital Mbombela, which is in Mpumalanga, is well under construction and will open in November as well. That’s going to be 150 rooms and apartments … There seems to be an incredible vibe and it’s very busy there.”

Are you looking at more acquisitions and development opportunities?

“Expansion is going to continue. We open two new hotels every year.

“This year we’ll open three because of the opportunity that Covid has provided, and we’re going to be going into other sub-national districts like Port Elizabeth, as well as Bloemfontein.

“Our objectives are that, as you drive into any town across South Africa and you see the Tsogo Sun or the City Lodge and recognise them, you’ll see and know the Capital as well and what it stands for. The differentiator is we always have an apartment product and conference centre forming part of our hotel.”

Wachsberger says he started Capital Hotels as an ‘asset-light’ business in 2008, when he rented out apartments and did not own any of them.

“That was our differentiator in the market, and it has become prolific in Airbnb today. But we were the first in apartments.

“And in 2010, in the hangover of the World Cup, although we had made a lot of money, there were now empty hotels, distressed hotels, one of which was a hotel called 20 West. We raised private equity capital to buy 20 West to on-sell it, apartment for apartment, to investors. That was really the big first kick for our business into the world of hotel and conference, but more importantly into the world of finance because property is about finance.

“We bought a few distressed properties and converted them, but otherwise we learnt the skill of developing ourselves.

“Today our best properties are the ones we’ve developed from the ground up, and we’ve developed a standardised model which is the one that I’m saying we’re going to be opening nationally.”

How is the group planning to grow, now that the Section 12J tax incentive scheme that government had going has come to an end?

“Over the years, we had Section 12J come to the rescue, where people had such a great tax incentive that the cost of capital for hotel properties was extremely low.

“Today we’re stuck, quite frankly, in our ability to expand through ownership of buildings because there isn’t a clear provider of capital, particularly to hotels, at a very cost-effective rate.”

“[But] that is where one needs to be innovative. We’ve actually managed to fund the Capital Zimbali through a pension fund and a loan-pool scheme that has been the most effective cost of capital.

“So our ability to adapt in terms of property opportunities, but also financing opportunities, is quite key. Capital Mbombela is funded by the IDC [Industrial Development Corporation], where the IDC already likes the job opportunities and the hotel expansion that’s taking place in areas outside the normal nodes.

“Chasing the capital pools was something we also pride ourselves on being able to find.”

Ryk Neethling on estate development and semigration to the Cape Winelands

Ryk Neethling on estate development and semigration to the Cape Winelands