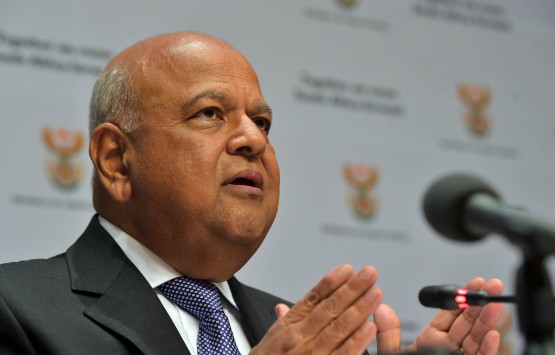 HANNA ZIADY: We are in conversation now with Finance Minister Pravin Gordhan, who earlier this afternoon tabled his 2016 budget speech in Parliament.

Minister, thank you so much for your time today. How does it feel to be back in the hot seat?

PRAVIN GORDHAN: Thank you very much for having me, and it is indeed a hot seat at the moment, given the economic environment both globally and in South Africa. But it’s also a familiar seat. So that actually helps. We have an excellent team of people within the Treasury and all of the things we announced today have support within government as a whole. So that helps to make the hot seat easier to sit in.

HANNA ZIADY: That’s good to hear and we will pick up on that a little later. The issue of course of South Africa’s credit rating has loomed large over this budget. Did you consult the rating agencies at all over the budget, and do you think that the commitments that you’ve made are going to be enough to stave off a downgrade?

PRAVIN GORDHAN: No, no, we don’t consult the rating agencies. We take account of their pronouncements at various stages and we think that we’ve done more than enough, not just for rating purposes but to ensure that as a country and as an economy we begin to move in a more optimistic and different direction. So our fiscal numbers, I think, are more than exciting, and would surprise many people.

Secondly, our tax increases haven’t shocked many people. Those earning in the bigger oncome group would be satisfied, although they would not have the benefit I think of fiscal drag.

Thirdly, we are tackling tough issues like the state-owned companies and the kind of governance and challenges that they have. We’ve put together a package that should, through investment in infrastructure and support for different sectors of the economy – like the Oceans Economy or manufacturing and other areas – begin to scale up productive activity so that we can see growth at the end of the day and for the medium term.

HANNA ZIADY: Which is what we desperately need. Certainly reducing the budget deficit to 3.2% of GDP, as you forecasted in this budget, down from the 3.9% achieved in the 2015/16 tax year, requires some serious actions indeed. You touched on it briefly earlier, minister, but are you confident that you do have the political will in government to do this, to implement expenditure cuts to maintain fiscal discipline and bring that budget deficit down?

PRAVIN GORDHAN: If I announce 3.2% we have to deliver 3.2%. And if that is derived from expenditure cuts on the one hand, then those programmes from which we derive or expect this money no longer have that amount of money to actually spend.

HANNA ZIADY: You mentioned tackling the governance and financial challenges faced by state-owned companies. The announcement that government will look to sell minority equity stakes in state-owned companies may be met with disapproval within the ruling party alliance. Government has capitulated to the will of its alliance partners before, most recently as we know on initiatives around retirement reform. Assuming that these proposals around SOEs, SOCs, are met with resistance, why will this be different and why can we be confident that government will not capitulate?

PRAVIN GORDHAN: Firstly, the minority equity partner is in respect of SAA, where everyone can see that this is an entity that is in, let’s call it, mid-term decline, and this requires a new board, it requires a permanent management team, and in time it might well require a minority equity partner, which had some 10, 15 years ago as well, when that particular airline that it partnered with fell through and couldn’t deliver on the equity contribution.

In respect of other forms of infrastructure delivery and commitment and so on, we are saying that our ambition is not met by the current resources that we have within government. We then have a choice to make, and that choice is either you defer or lower your ambition, or you bring in and crowd in other forms of financing, which could be foreign investment banks, for example, institutions. It could be private-sector financing, it could be union investment companies. So we have various options and the principle is that we need to have co-investment from somebody to get a higher level of funding than we have currently.

HANNA ZIADY: There has been a fair amount of controversy surrounding SAA chairwoman Dudu Myeni in the press in recent months and weeks. Can we expect to see her remaining in her position over this year?

PRAVIN GORDHAN: Well, the whole question of the new board is under consideration and hopefully we’ll be able to announce a board in the next few weeks.

HANNA ZIADY: Staying with state-owned enterprises, minister, you announced that the initiatives of the chief procurement officer, which keeps a close eye on the procurement activities of government departments, will now also be extended to include state-owned companies’ procurement plans, specifically reviews of contracts above R10 million. Can you give us a sense for how many contracts there are awarded by SOEs with a value higher than R10 million?

PRAVIN GORDHAN: SOEs are huge. There would be more than just a few. I don’t have a number at hand, but these are significant amounts of money that are spent in, say, two- or three-year cycles. They require a greater deal of transparency, they require a look in order establish if they are delivering value for money, and that they are getting whatever services or goods that they are buying at competitive prices, all of which is provided for in our constitution, by the way. We really are beginning to now implement these provisions and get the kind of expertise that we require in order to undertake this exercise, together with offices like the Auditor-General.

HANNA ZIADY: You announced a freeze on non-essential appointments from April this year in the government, in line with plans to cut expenditure over three years by R25 billion by curtailing personnel spending. Would it not be more productive perhaps to simply fire underperforming civil servants and make more merit-based appointments in government?

PRAVIN GORDHAN: We are not a dictatorship where you can get up one morning and decide you want to fire ten people. We have labour rights in our constitution, we have processes to follow otherwise we would be taken to court. As an employer, like any other employer, we would have to comply with [the labour law]. And so I think we must be sensible and reasonable that what we are doing is in the first instance ensuring that where vacancies arise they are evaluated to see whether they are involving direct service delivery and, if they are not, then you actually ensure that you freeze that particular position. So it’s not about retrenchments and firing people. It’s about containing additional staff on the system, which itself I think would deliver benefits at least in the short term.

HANNA ZIADY: Finally, minister, you mentioned that a better future for South Africa requires bold and constructive leadership, confidence in President Jacob Zuma is at an all-time low. What bearing does low confidence in the political leadership of this country generally have on our future?

PRAVIN GORDHAN: I think political leaders are not the only leaders in our society. They are amongst them. And President Zuma does enjoy support in various parts of our society that can’t be neglected either. So what I was saying there is that you can require the right hand of boldness and a constructive approach from, say, union leaders, from business leaders, from society leaders, the religious sector, including the politicians, to come to some kind of agreement about how we do things differently, how do we actually know the different resources and work together. And that we will start working on, and some of that work we’ve been doing in the last six weeks or so as well. I’m confident that people recognise that the current crisis does give an opportunity to do things differently, to build new types of partnerships and build on the sense that all of us have which will contribute to moving away from the kind of crises that we face at this point in time.