NOMPU SIZIBA: Reminiscent of the words of British band The Clash, yesterday many were asking whether former finance minister Nhlanhla Nene would stay or would he go. Well, before five o’clock South African time this afternoon all was revealed by President Cyril Ramaphosa. Indeed he had accepted the resignation of Nhlanhla Nene and unexpectedly appointed the first black Reserve Bank governor, Tito Mboweni, to the post of finance minister.

Well, to give us his views on the recent saga and the ultimate decision to appoint Mr Mboweni as finance minister, I am joined on the line by Dr Adrian Saville, the chief executive of Cannon Asset Managers. Thanks very much for joining us, Dr Saville.

President Ramaphosa has accepted Nhlanhla Nene’s resignation. I guess he had very little choice in the matter. Your thoughts?

ADRIAN SAVILLE: It’s great to be with you and your listeners. I guess he did have discretion. He could have kept Nhlanhla Nene on. It would, I suppose, have tainted him. It would have caused, in market language, “contagion”.

So he has put down a firm line, a clear line in the sand, and it has implications that I think reach well beyond this immediate circumstance of Nhlanhla Nene and points to the prospects for others who might have been implicated or tainted in the Gupta saga.

NOMPU SIZIBA: That brings me nicely to my next question, which was really to ask what the implications are for those who are perceived to have done far worse, and with what sort of speed should Mr Ramaphosa deal with those people so that he is seen to be serious?

ADRIAN SAVILLE: There was some speculation that this afternoon’s announcement – and thank goodness it wasn’t a midnight announcement, it at least gave us a chance to see how the market reacts in real time – that there might be wider cabinet ramifications. That hasn’t materialised. That hasn’t been the case. But it’s a very, very clear signal that he means business.

But to talk about timelines and who else – I think we are quickly into the world of speculation.

NOMPU SIZIBA: Tito Mboweni comes from the era of the three TMs – Thabo Mbeki, Trevor Manuel and himself, Tito Mboweni – when the country’s economic growth was booming. He is also known to have a track record, obviously, and he was involved in the setting up of the new development bank, the Brics Bank. What are your thoughts on his appointment?

ADRIAN SAVILLE: Well, just to make perhaps a last comment on the removal or replacement of Nhlanhla Nene, unfortunately this is another example of short tenures in Treasury. South Africa needs to now break this pattern and disassociate itself from that aspect of government.

When it comes to Tito Mboweni, I’m unambiguously positive. You want to be careful about being too glowing, but you are absolutely right, he is associated with the triple-TM era, which was a glowing period of economic performance for South Africa, along with other emerging markets. Unemployment numbers got into a reverse, inflation was tamed, growth was high, purpose and incomes were rising, infrastructure spend was well under way. So it really was a golden patch for South Africa, and Tito Mboweni was at the helm of the Reserve Bank over that period.

I don’t think you want to lose sight of the fact that, to help us get into that shape, he did two really important things in his tenure as governor of the Reserve Bank. The first was he broke South Africa’s track record of double-digit inflation. For a long time South Africa was associated with teenage-type inflation numbers. To overwork the example if you want, in another way in which countries can be captured, inflation is one of the most devastating eaters of income and wealth. He broke that double-digit inflation record and got South Africa into the business of single-digit, well-managed, low and stable inflation.

The other thing that Tito Mboweni was responsible for was the rebuilding of the South African Reserve Bank’s foreign-exchange reserves, which had been entirely eroded under the Asian and Russian crises. What Tito Mboweni inherited was a Reserve Bank without reserves and with double-digit inflation. What he left South Africa with was a vault of reserves and single-digit inflation. That’s an exceptional track record to bring to the ministry of finance.

NOMPU SIZIBA: It’s great that we are talking to you because you have all of this insight. Clearly the market likes it, the decision. The graphs that we are seeing today in terms of the rand’s performance make for great reading.

ADRIAN SAVILLE: Well, the rand liked it, the bond market liked it, and I think those are the two most important immediate barometers. Going back to my earlier point that at least here was an announcement made in South African market time, we don’t have to take the cold bath in the morning to figure out what markets really thought of the event. The response has been overwhelmingly positive. What this means in terms of a strengthening rand will pass through into lower inflation, in terms of lower yields. It means that a small amount of pressure is taken off the fiscus, which finds itself under difficult strain, with absent economic growth, clear spending pressures and rising interest rates. At least this afternoon can be straight-lined. It’s put a brake on interest rates.

NOMPU SIZIBA: And then in terms of Mr Mboweni delivering the budget speech in two weeks’ time, obviously he is experienced and all of that, but he won’t really have had much to do with the authoring of it. I suppose that really doesn’t make much of a difference. He knows and understands what the issues are.

ADRIAN SAVILLE: Absolutely. There is also the recognition in your comment that Treasury is a strong institution or organ of state and, when you are delivering a budget or an interim budget, this hasn’t been days or weeks in the making. This has been months and months in the making. So Tito Mboweni will be delivering work that has been in progress and under way for many, many months, and you are unlikely to see any grand pronouncements or announcements on policy shifts. It will be a reading of the financial state of the nation, the economic wellbeing of the country, and pointing to some things we can expect by way of policy direction.

But perhaps the other aspect that Tito Mboweni is very well versed in is his ability to communicate clearly to markets and business, which are the real engine of employment and prosperity in the country. I think that certainty and clarity of communication are going to be welcomed in a period of high uncertainty that has characterised South Africa over the past couple of years.

NOMPU SIZIBA: I suspect, though, there will be some quarters that won’t appreciate his appointment because Tito Mboweni is seen, as with the other TMs, to represent neo-liberalism, which is very laissez-faire and not caring about society at large, and people at the margins at society then become even more marginalised. This is the view of certain quarters in our society. And of course one would hope that everyone would support an appointment like this because all hands need to be on deck for South Africa to progress. Your thoughts?

ADRIAN SAVILLE: Look, one of the things that President Ramaphosa has made very clear is that for South Africa to get back into the industry of high economic growth, which is business-building and most importantly job-creating, we have to reverse the investment drought. In part that is about establishing domestic confidence and in part that’s about establishing foreign-investor confidence. Put those two ingredients into the cocktail, South Africa could quickly restore much-needed investor confidence, rebuild gross domestic fixed investment, and that will translate quickly into improved economic growth – I think it’s dreamy to talk about 5% or 6% economic growth, but certainly 2%, 3% or possibly even 4% – and to start redressing unemployment.

Now, I can’t think of a better social initiative or social imperative. And if you can do that in a lower, modest inflation environment, boy, far from being market-friendly, that’s country-friendly.

NOMPU SIZIBA: Dr Adrian Saville, thank you very much for your time. We’ve run out of time, even though we have a lot more to talk about.

I’m sure if it can be broken we, or rather the ANC, will find a way. 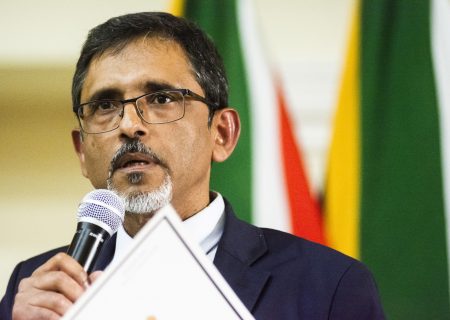