What informs the recovery in GDP growth in 2021?

Looking at the upward revision of the 2020 growth outlook, Operation Vulindela and the status of digital migration: Duncan Pieterse, deputy director-general of economic policy, National Treasury.
By Nastassia Arendse 24 Feb 2021  23:06

NASTASSIA ARENDSE: We’ve had the dissection of the budget speech, but National Treasury says that it is serious about cutting waste and is looking at merging or closing entities to reduce duplication of functions. They’ve also reiterated the President’s commitment to implement Operation Vulindela, which is a joint initiative by the Presidency and Treasury to push through economic reforms.

To give us a picture in terms of the upward revision of the growth outlook, as well as talk a little bit about Operation Vulindela, we’re joined on the line by Duncan Pieterse, who is the deputy director-general of economic policy at National Treasury. Duncan, thank you so much for your time this evening.

NASTASSIA ARENDSE: Let’s get into the upward revision of the 2020 growth outlook. Based on the models that you’re working on with your team, what have been the “incentives” that allow you to believe that the economy could go this particular route, given the fears that we might get into a third wave in May – and various other issues within the economy?

The one is that we had a much better third quarter last year than we initially anticipated. The economy came out of lockdown. The global economy recovered a bit faster than we anticipated, particularly in China which, as our largest trading partner, does have a disproportionate effect on our economic outlook.

So ultimately it was really about that very positive third quarter that is now allowing us to revise it to a 7.2% contraction, which is still a significant contraction. But it is of course smaller than we anticipated.

Your second question was around the third wave, and this is where the 2021 number becomes very difficult to predict. As you know, at the time of the MTBPS, we thought that we could anticipate growth of about 3.3% in 2021. That’s still unchanged.

The fact that it is unchanged reflects a lot of uncertainty related to the path of the pandemic. We don’t know what will happen this year. We don’t know what kind of restrictions on economic activity will be imposed as a result of the pandemic, and we see that feeding into uncertainty in terms of how households and businesses behave. Hence the need to keep growth unchanged at 3.3%.

NASTASSIA ARENDSE: In terms of the impact that the Covid-19 pandemic had on unemployment, we saw its devastating impact on businesses, and I suppose knock-on effects to unemployment as well. The figures that came out yesterday were sobering, to say the least. I’m sure it’s even more difficult to predict where the rate might go for the rest of the year.

However, do your models give you an indication as to whether we’d be able to get to pre-Covid levels from that unemployment-rate point of view?

DUNCAN PIETERSE: What our model is able to do is it is able to tell us when we will get back to our 2019 levels of GDP, and we anticipate that to happen in the third quarter of 2023. So that should give you a sense of how significant an impact the 7.2% contraction is having on the total size of our economy.

It’s much more difficult to predict what will happen with unemployment. And that’s because that requires one to take a view on the long-term …… [4:35] effects of the 7.2% contraction. With 7.2 million people unemployed at the moment, and 2.2 million jobs lost in the second quarter of last year, we know now that at least 1.4 million of those jobs that were lost were not recovered. And so that does tell one that there is likely to be some longer-term scarring associated with the unemployment rate.

And we also know that long periods of economic inactivity and de-skilling can erode people’s ability to re-enter the labour market. So the way we then incorporate this into our thinking is what this means for household consumption, what this means for incomes, what this means for wealth and therefore for GDP. So that is reflected in this recovery that takes until the third quarter of 2023 in GDP to actually get us back to the size of economy we had at the end of 2019.

NASTASSIA ARENDSE: In my intro I mentioned operation Vulindela. From what I’ve read thus far, it’s been going since October last year. It is already claiming some victories, obviously allowing municipalities which are in good financial standing to source their own electricity from independent producers.

With regard to the goals for this year, what’s on the cards for Operation Vulindela right now?

DUNCAN PIETERSE: As you know, Operation Vulindela really is about Treasury and the Presidency working with line departments to make sure that we can really push through those very urgent structural reforms. The priority areas that we’ve been focusing on are the network industries –  transport, electricity, telecommunications, water and so on. Those really are our focus areas because we do believe that those are the areas that can actually have the highest impact on economic growth.

In terms of the focus now there are still a few reforms in the electricity sector that we think are very important in terms of encouraging private-sector participation in the generation of electricity. There are some renewable-energy bid windows that are in the process of being finalised. The President spoke about raising the licensing threshold to allow companies to contribute to the grid in the fourth quarter, and we really see the electricity reforms as being the most crucial at this stage, because we still have an electricity grid that is unreliable and where load shedding is a risk. And so that is obviously a major risk to our economically formal agenda as well as to our recovery.

In terms of other reforms, we are also focused on water. The are a few things under way in terms of improving the ability of government to issue water-use licences, as well as thinking more innovatively about how we regulate water and how we price water, so that we can contribute again in that way to economic recovery. The key issue to highlight here, however, is that the Presidency and the Treasury are really about working with line departments, so this is really the support we provide to them. Some of these early victories that we’ve managed to achieve are really due to those line departments pushing forward and supporting us. We will of course also be providing regular updates to the public on the work that Operation Vulindela is doing.

NASTASSIA ARENDSE: You are looking to implement some long-delayed policies. One of them is moving TV broadcasting from analogue to digital transmission by March 2022. Those who are cynical out there, who’ve heard this story about moving from analogue to digital transmission, might possibly be rolling their eyes. How positive are you that this can be achieved by this time?

DUNCAN PIETERSE: Absolutely. There have been long delays in both digital migration and the allocation of spectrum. We’ve been working quite closely with the Department of Communications and interacting with Icasa to make sure that the auction can proceed as soon as possible.

There’s now been a slight delay in terms of the auction, but what is promising is that the auction will go ahead independently of the status of digital migration, because what the telecommunications companies really [don’t] need in this instance is uncertainty around how the digital migration process will unfold, and when it will unfold, and then they are going to participate in the auction on that basis. So this is an area that we are focusing on at the moment. It’s a very short-term issue that hopefully will be resolved in the next few months. But ultimately, as you say, once we have certainty on digital migration – which we are working very hard with the department on – that spectrum auction can then go ahead and hopefully unlock some long-needed investment in that sector.

NASTASSIA ARENDSE: Duncan, thank you so much for your time. That is Duncan Peter, who is the deputy director-general of economic policy at the National Treasury. Under increasing pressure to do more to ease a supply chain crisis in Britain after pumps ran dry at some gasoline stations because of panic buying. 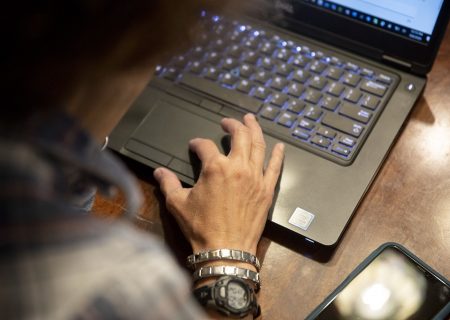