DAVID SHAPIRO:  Not a lot. It was dominated by the banks story. In fact it didn’t have any impact on bank share prices. I think most of it had already been discounted – the banks had put away provisions for those fines. But I think the fun is in the detail of the e-mails that have been released. I think it’s probably one of the reasons. I don’t know why it’s the Competition Commission that is investigating banks here and their dealings in forex, but I would imagine that, as it’s a small community, people get to know each other, they personalise their deals. And if I’m long of a deal – in other words, if I am bull of something – and the other person has got a problem, he might kind of [say] don’t do something, let me get rid of this. I think it might happen in markets.

SIKI MGABADELI:  But I think globally it’s been –

DAVID SHAPIRO:  Having been on markets for 40 years, I can understand some of the chit-chat and talk, and how people do help each other. Of course it’s illegal and of course it shouldn’t happen, because someone loses out because of that.

SIKI MGABADELI:  Ja. And I suppose that’s probably why the Competition Commission [is involved] – because it’s the anti-trust bodies in Europe doing the probes, as well as in the United States. But there were significant fines being asked. Obviously when I think of foreign exchange markets I want to run because it’s such a mystery to me what happens there.

DAVID SHAPIRO:  Siki, you know, those currencies trade to the fourth or fifth decimal point, but in huge volumes. So if you chop off one or two little points or do something you won’t really see it – you won’t feel it or we won’t feel it in the kind of money we deal in. But in terms of trading it does have an impact. I don’t want to accuse anybody, but all I’m saying is that I remember from the floor of the stock exchange you get close to people around you, you get close to your competitors. So you talk to them, you talk to them a lot. I think that in that case it was very difficult to remain away from them.

SIKI MGABADELI:  I suppose all of it is going to come down ultimately to the detail of how much of it was deliberate, and how much of it was in the nature of just doing the trade. We are going to be chatting to Wichard Cilliers, who is director and chief dealer at TreasuryOne, to get a sense of – remember the 2001 probe into the rand?

SIKI MGABADELI:  I just kind of wonder whether this is similar to that?

DAVID SHAPIRO:  Ja, we’ll hear. The rest of the markets – I think markets are marking time. The Federal Reserve releases its minutes, which give details of the discussion at the last meeting, and everybody looks for that, for clues as to how they are viewing the economy. So until that is out markets are doing nothing.

SIKI MGABADELI:  That should be coming out any moment now.

DAVID SHAPIRO:  Eight o’clock our time, probably. And, other than that, not much news on the commodity markets. Iron-ore shares keep coming back; Kumba was down, Assore was down. Gold shares also came under a bit of pressure. Sasol was a little bit better.
Results dominated. You are speaking to Tiger Brands, they came down very sharply. They were up initially but I think that, the closer you looked, the big worry – and I’m guessing at this, why the market took a downturn – was that there are concerns that maybe more money will have to be poured into Nigeria and maybe even into Kenya to get these right.

SIKI MGABADELI:  And Kenya, of course – as Peter Matlare said to us in the conversation we had with him a little bit earlier, which we will share with you in a few minutes’ time – when you have a situation where your executives almost perpetrate fraud because they want to make things look good, it takes a long time to clean something like that up.

DAVID SHAPIRO:  It has also exposed weakness in doing deals up there. On the other hand, you had Spar coming out with results. They’ve done the deal in Ireland. It was a very good result. So they were up 20% – admittedly because they’ve now consolidated the Irish acquisition. But it seems to be a much safer place to be – go to Ireland rather than maybe in Africa.
Even though the market was down, there were some big movements. PPC is recovering – it has a long way to go, but it is starting to pick up. Astral picked up on its news, Brait is still in the limelight, still in the forefront of movement. Mondi hit a new high. There are lots of pockets where the companies are doing well and there’s action taking place, supporters coming in to the market.

SIKI MGABADELI:  All right. Let’s have a quick listen to Graham O’Connor, CEO of the Spar Group. We were talking here about how they coped with the consumer environment in South Africa.

GRAHAM O’CONNOR: Certainly it’s very tough on the consumer out there. Load-shedding hasn’t helped matters, [with] the tight economic climate, lack of growth. So it is quite a dull place, really pedestrian I suppose you could call it. But despite that we still performed very strongly and that is because of our strong model that we have, our strong independent retailers, supported by ourselves.

SIKI MGABADELI:  And you’ve also managed to gain market share in that very same environment, so would you attribute that to what you’ve just said about supporting your retailers?

GRAHAM O’CONNOR: Well, what we like to do is upgrade 20% of our stores every year, so effectively every five years a store would have a major upgrade. And we’ve managed to do that. Last year we upgraded 185 stores, we’ve upgraded 56 year to date, and expect to upgrade between 150 and 180 stores this year. So that’s certainly helped matters, but also our whole promotional campaign, or our green-tag sale, as well as our drive on our own label, our Spar-brand products.

SIKI MGABADELI:  Thanks to Graham O’Connor. The full interview can be accessed here.
So David, we’ve got the MPC announcement tomorrow. CPI up to 4.5% year on year.

DAVID SHAPIRO:  They won’t do anything yet, but they will do something probably later, I think inflation is starting to creep. I think a big concern there is wheat prices going up. The petrol price is likely to keep going up as well. I think the full benefits of the lower oil price have now worked out. And then we’ve also got [higher] electricity prices which will probably come through. So the more you look at it, the higher the inflation rate is going to go and I think by next year we will be back at about 6% – all the benefits gone. So I think they are going to have to raise rates somewhere – either later this year or early next year. A key milestone for the Elon Musk-led carmaker whose shares have been on a tear amid a global shift to electric vehicles. 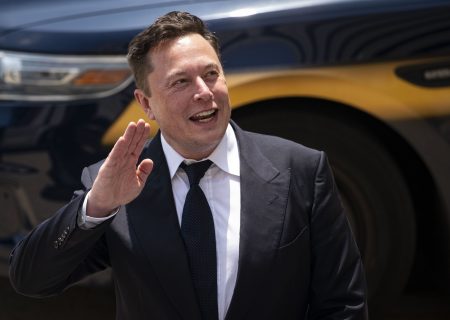